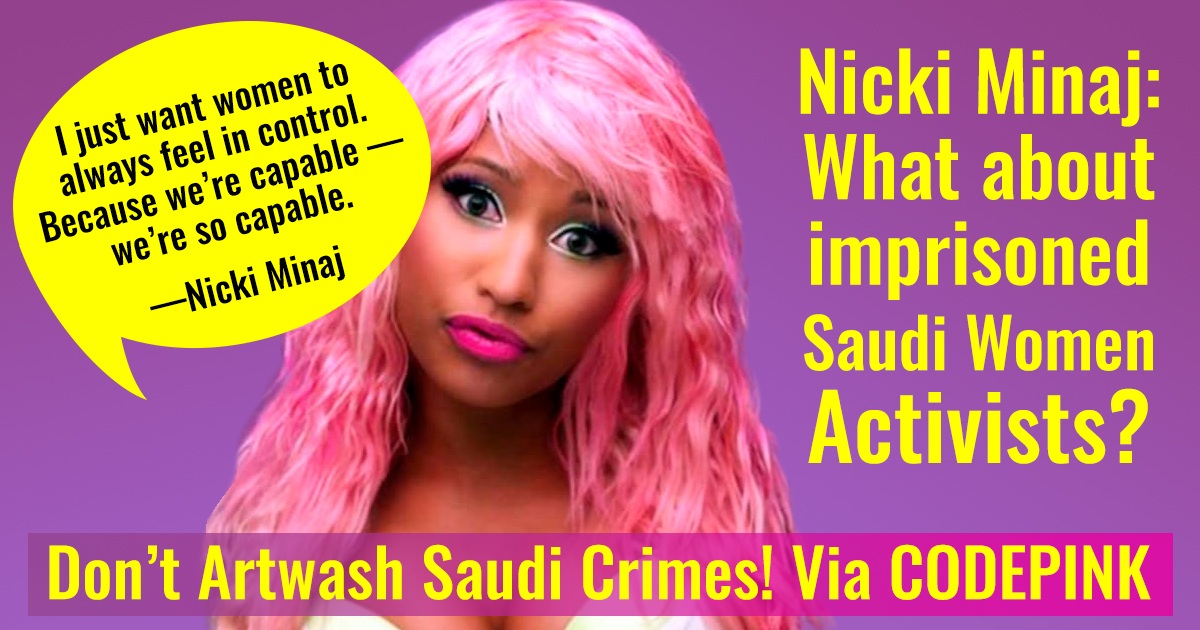 Hip hop artist Nicki Minaj considers herself a symbol of women’s empowerment. So why then is she performing in the most gender-segregated, repressive country on the planet? If Nicki Minaj follows through with her July 18 concert in Saudi Arabia she will be helping the country and its leader, Mohammad bin Salman, artwash Saudi Arabia’s crimes against women- including the imprisonment and torture of women activists. Please sign our letter to Nicki Minaj asking her to cancel her headlining show at the Jeddah Festival or use her performance there to speak out for women’s rights. If Nicki Minaj insists on headlining the Jeddah Festival, she should advocate for the release of the Saudi women activists languishing in prison and speak out against Saudi Arabia’s male guardianship system that requires women to have the permission of a male relative for such things as obtaining a passport, traveling, attending college, marrying, receiving a divorce, and other major life events. Tell Minaj, DON’T ARTWASH SAUDI CRIMES!

Saudi Arabia is the most gender-segregated country on earth where women are denied basic human rights and treated like children.

Loujain al-Hathloul is one of the Saudi women who led the movement to lift Saudi Arabia’s ban on women drivers and campaigned against domestic violence and the oppressive Saudi male guardianship system that requires all Saudi women to have a male relative’s permission — husband, father, brother, uncle, or even son — to engage in other major life events such as studying, obtaining a passport, traveling, getting married or divorced, obtaining medical treatment, and more.

Though Saudi Arabia finally granted Saudi women the right to drive, Loujan and other women’s rights activists were arrested for the peaceful role they played in the campaign for women to drive. Loujan and other Saudi women’s rights activists have been imprisoned since May 2018 and have been subjected to solitary confinement, electric shock, flogging, waterboarding, threats of sexual violence — Loujan was attacked by interrogators who tried to take off her clothes and yelled, calling her a slut — and other forms of torture.

The Saudi government has refused numerous calls from human rights groups and lawmakers around the world to release Loujain and the other jailed women’s rights activists.
Loujain and the other women’s rights activists are now undergoing trial, charged with “destabilizing Saudi national security” and “dealing with foreign entities”. The only thing the Saudi women are guilty of is campaigning for basic rights and protections for women.

Since 2015 Saudi Arabia has been waging a war on Yemen so brutal that the country is now experiencing the worst humanitarian crisis on earth. Already, as many as 85,000 children under the age of five have died of hunger.

Saudi Crown Prince Mohammed bin Salman has not been held accountable for barbaric murder of Washington Post journalist Jamal Khashoggi and the women activists who are being imprisoned and tortured for speaking out for their rights.

If you perform at the Jeddah Festival on July 18 and do not use your platform to call for an end to Saudi Arabia’s abuses against women — freedom for Saudi women activists and journalists, and end to the war in Yemen, and repeal of the male guardianship system — you will be helping Saudi Arabia artwash their war crimes and repression of women, journalists, and anyone speaking out for basic human rights.

Please cancel your July 18 performance and speak out for Saudi women and the people of Yemen.