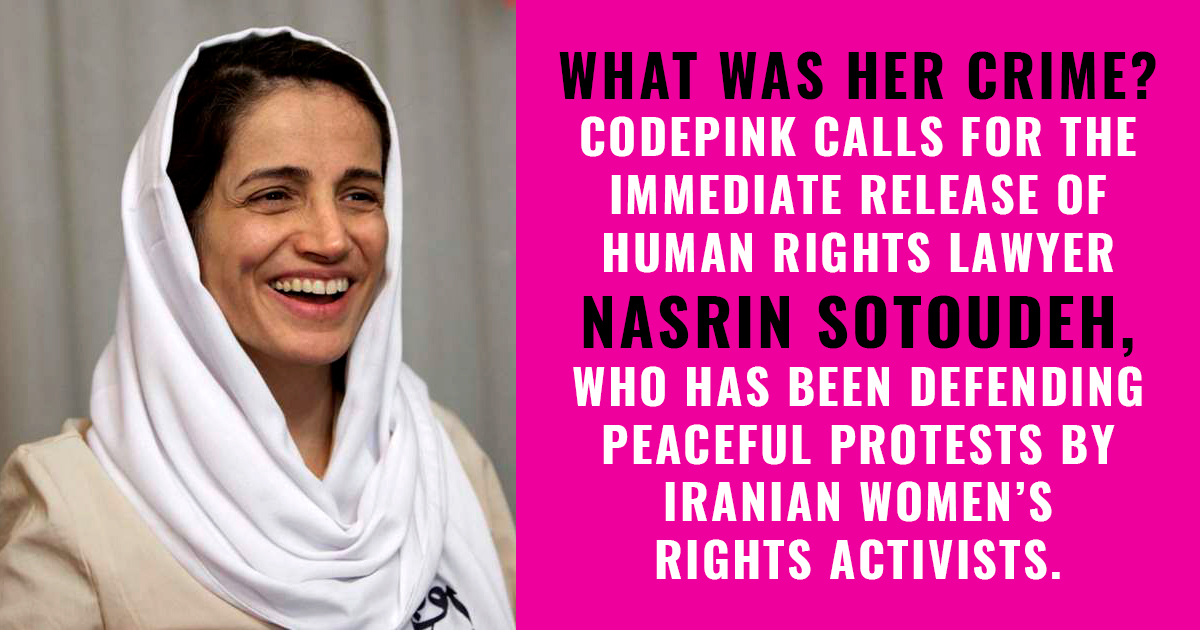 Just days after International Women’s Day, prominent human rights lawyer Nasrin Sotoudeh was sentenced to somewhere between 7 years and 33 years in prison and 148 lashes--one of the harshest sentencing for human rights defenders in modern Iranian history. What was her crime? Defending women’s rights activists who are peacefully protesting against the mandatory hijab and other laws that oppress women.

For years, Nasrin defended women’s rights activists who have been fighting for gender equality, supporting abused children and women, and opposing the death penalty. In 2012 the European Union awarded her the Sakharov Prize for Freedom of Thought--its most prestigious human rights award. Her detainment is a gross reminder of the conditions that women’s rights activists face in Iran when challenging the patriarchal rules forced upon them.

We condemn the Iranian government for its imprisonment of Nasrin and all human rights activists in Iran and demand their immediate release. We also condemn U.S. government officials who appropriate Iranian women’s rights activists demands for democracy to justify their agenda for military intervention and sanctions against the Iranian people. Belligerent U.S. policies strengthen the hardliners in Iran and make it more difficult for civil society to thrive.

Please sign our letter to the Head of the Judiciary in Iran and Iran’s Foreign Minister to call for Nasrin’s release.

We are deeply saddened to hear that prominent human rights lawyer Nasrin Sotoudeh has been sentenced to between 7 and 33 years in prison and 148 lashes. We are supporters of peace and diplomacy with Iran and we unequivocally condemn her unjust conviction and call for her immediate release.

As a women-led anti-war organization, we fight against U.S. wars and militarism and speak up against gross human rights violations. We are outraged that Nasrin, who has dedicated her life to defending peaceful women’s rights activists, faces one of the harshest sentences among human rights defenders in recent Iranian history.

We encourage the U.S. and Iran to have open dialogue and diplomatic relations. We strongly oppose the Trump administration’s withdrawal from the Iran Nuclear Agreement and reimposition of sanctions. However, we cannot sit silent over Nasrin’s outrageous sentence. Her contributions to human rights should be celebrated, not prosecuted.

We call for the release of Nasrin Sotoudeh and all peaceful human rights activists, and we stand in solidarity with those fighting for women’s rights.