My future depends on this 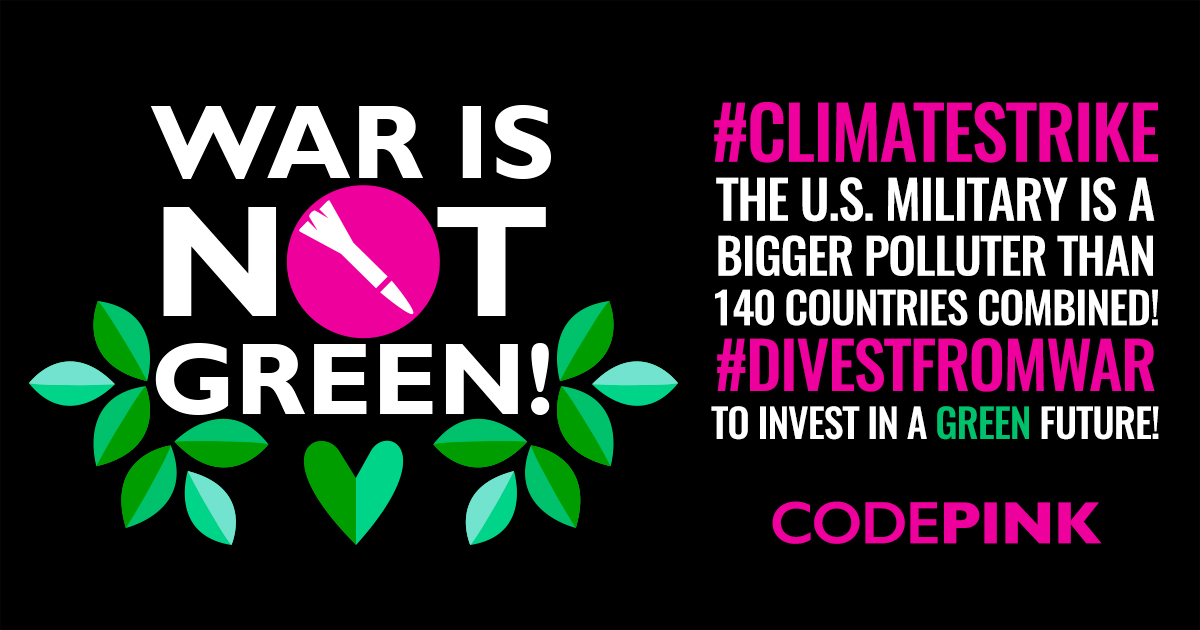 I’m 26 and I believe addressing climate change is one of the most important challenges of my generation. Did you know that the U.S. Military is the world’s largest consumer of carbon and causes more pollution than 140 countries combined? Yet 64% of our discretionary budget is siphoned off to the Pentagon every year and the private weapons companies that the Pentagon contracts with continue to place their short term profit above the future of our planet.

Funding endless war is an existential threat to human life and one of the leading causes of climate change- that’s why I’m asking you to join me and other CODEPINK activists around the country this Friday, September 20 at the youth-led Climate Strike. We’ll be attending events from coast to coast to support young people and explain why we need to divest from war and invest in a Green New Deal!

You can RSVP to join a CODEPINK team in one of the cities listed below. If you don’t see your city listed, contact me and I’ll help you organize a CODEPINK contingent to attend the climate strike happening in your city!

Attending a youth-led climate strike with CODEPINK in your city on Friday, September 20th, is an important first step in addressing the role that U.S. militarism plays in causing climate change. And after the strike, we will need to keep the momentum going in our own communities, which is why I’m inviting you to join our national Divest from the War Machine campaign. Divestment from the War Machine means removing our invested assets from companies that derive their profits from U.S. military interventions, the global arms trade, and the militarization of our streets and demanding that our cities, public employee pension funds, universities, religious organizations, individual investors, retirement funds, mutual funds, and other financial institutions stop investing in the merchants of death that supply and prop up the U.S. war machine.

If we’re going to avert a climate disaster, we have to hold companies like BlackRock, which invests billions of dollars in weapons manufacturers and millions in companies fueling the deforestation of the Amazon rainforest, accountable. If we want to drastically reduce our carbon emissions, we have to demand that our universities divest their endowments from weapons manufacturers which provide the ammunition our military uses to continue endless wars at the expense of human life and planet health.

Addressing climate change and U.S militarism starts with people organizing for change in their local communities. Join me and others around the country next Friday to strike for the climate and also sign up now to join our national Divest from the War Machine Campaign. Once you sign up for the campaign, a CODEPINK organizer will be in touch with you about next steps!

Towards a green, weapons-free future,
Carley Towne and the CODEPINK team