Meeting the Leader of the Tunisian Resistance @ Occupy DC

I went to DC three weeks before my wedding because there are two things that matter to me right now: marrying the love of my life and ending the Afghanistan War. In her memoir, A Woman Among Warlords, Parliamentarian Malalai Joya reminds us that on July 6, 2008 the U.S. military bombed a wedding party in Nangarhar Province killing forty-seven civilians including the bride. As my wedding approaches, it is more important for me to ensure that no more Afghan brides are murdered by the U.S. military than it is for me to write a dj set list.

Last weekend, I attended an organizing meeting of the New Priorities Network, which is working to build deep connections locally and nationally between labor, economic justice, racial justice, religious, and peace organizations. We know our work will last longer than any election cycle or war, and we are committed to breaking down the barriers between our movements for justice and peace. Right now, we're focused on four core priorities: end the wars / cut the military budget, tax the rich & corporations, create jobs, and save social services (education, housing, the Women, Infant, Child (WIC) program that provides vital maternal health and food subsidies to low-income families, social security, Medicare, Medicaid, the Environmental Protection Agency and a host of other domestic programs that are the social safety net here in the U.S.). These four priorities are not our only concerns, and we know they can only be sustained by building a new economy based on renewable energy.

Earlier this week, I observed the Rebuild the Dream Conference. In the past, CODEPINK has disrupted this annual event hosted by the Campaign for America's Future because of their refusal to acknowledge that ending the wars is a vital part of building a secure America. This year, the conference included ending the wars as part of their platform for change and provided space for Nelini Stamp, an organizer with the Working Families Party, who has participated in Occupy Wall Street since Sept 17, to address the plenary about the Occupy Together movement. Our Make Out Not War stickers were the most sought after and people were really receptive to receiving information about Occupy DC at Freedom Plaza, which began yesterday.

My week in DC culminated on the first day of Occupy DC. Preparing for the day, I met Ann Wright, one of the courageous foreign service officers who resigned when the U.S. declared war on Iraq. Ann's story is particularly inspiring to me, as I left college with the goal of becoming a career diplomat. I am so grateful I never got off the list of eligible hires, since my true calling is to be a citizen diplomat.

First I helped give away over one thousand CODEPINK stickers, including the highly sought after Make Out Not War stickers. Then, a thousand of us created a human 99% which was photographed from the top of a nearby hotel with the Washington Monument in the background. (I'm in the lower left corner of the nine near the percent sign.) We marched in the streets of DC, stopping at the Chamber of Commerce to hand in resumes from the jobless and under-employed among us, since they claim to be job creators. 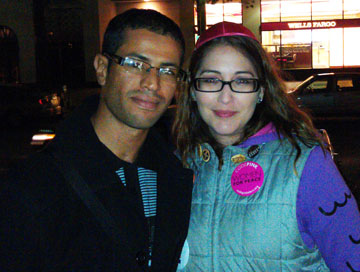 Our day was capped off with a concert and a Skype call with our brothers and sisters in the Afghan Youth Peace Movement in Afghanistan. While I listened from the side of Freedom Plaza, a gentleman approached and asked if I spoke Arabic. Unfortunately, I do not. Thankfully he is multi-lingual and we were able to chat in English.

Jamel Bettaieb is one of the leaders of the Tunisian uprising and is the head of the largest trade union in Tunisian. He is in DC to share the story of his people with our leaders – from the White House to Freedom Plaza. Jamel reminded me that we Arabs and Jews are cousins. For centuries, we have lived peacefully side-by-side in the Middle East with our Christian cousins. It is the political class that creates conflict, not our ethnic our religious differences. Regardless of country, there is something about the power of ruling that corrupts people. Some pundits say the American Autumn is nothing like the Arab Spring, since we have no dictator to overthrow. But when Jamel spoke about the high rate of unemployment among college-educated Tunisians, and the continuing lack of economic growth in his country, I knew I had made a friend fighting the same global system of injustice. Whether the 1% calls themselves democratic representatives, corporate overlords, or dictators the effect is the same on the 99%. Jamel is staying in DC for a two-month fellowship and he let me know that he's got a real hankering for a good Kosher meal. Did you know that the Muslim and Jewish dietary laws are basically identical? Unfortunately, I'm on my way home to celebrate Yom Kippur with my fiancé, but I'm sure my sister CODEPINKers will find him a Kosher meal real soon.