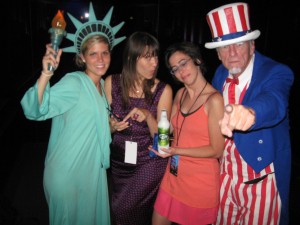 I mean: we're CODEPINK. We're going to crash your media party. Don't like it? DON'T HAVE A MEDIA PARTY.

And while the ladies of CODEPINK were busy goofing of with Uncle Sam and the Statue of Liberty, local reporter Jeff Guntzel (a former compatriot of mine from Punk Planet, now with various news outlets including Electronic Iraq) was busy whopping it up with the Minneapolis Chief of Police.

And by whooping it up, I mean, grilling him incessantly on police brutality in the Minneapolis area surrounding the RNC. Jeff's questions were pretty much along the lines of: Is that acceptable behavior from the police? 'Cause I live here, and I think that's pretty weird.

And his responses? You gotta look at who put them into those situations. They brought it upon themselves.

Jeff's follow-ups: Really? 'Cause one of those kids was five.