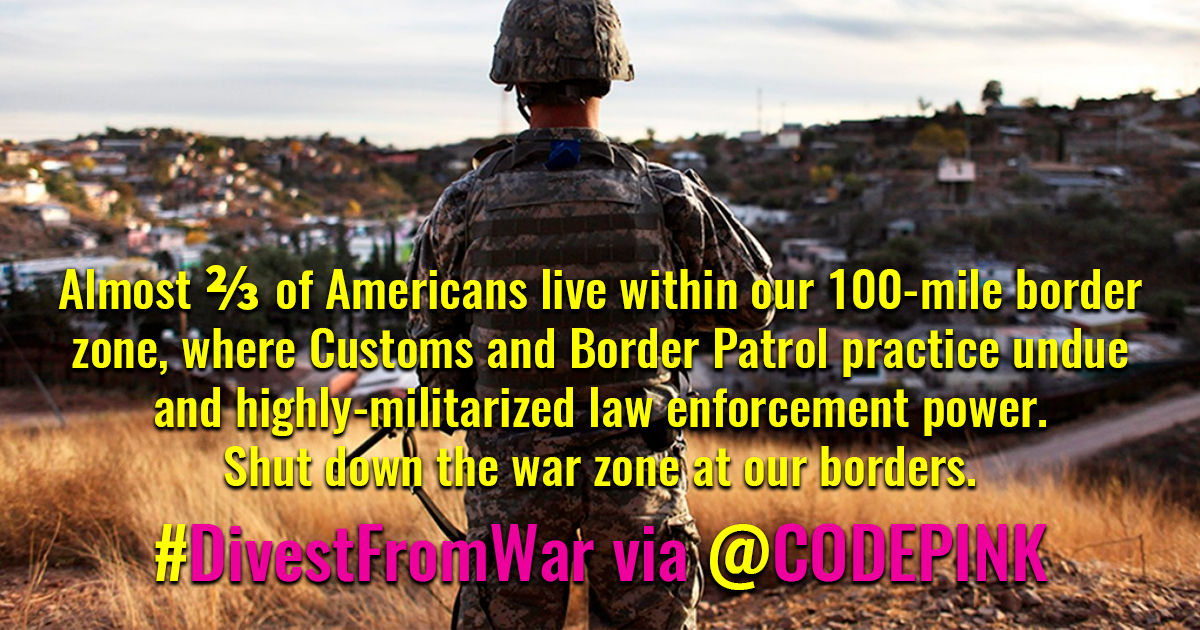 This day, in honor of all working-class, poor, and other oppressed people, we will rise because we want to live in a world without weapons and war, without violence and hate, without bans and walls. A world where people can live without fear, where communities can have what they need to thrive and assert their rights to peace, justice, and health. We call for an end to border-zone militarization and the criminalization of migrants and refugees, and for the divestment of all border funding.

The American border zone is defined as the entire area within 100 miles of a land or coastal US border, giving Customs and Border Patrol jurisdiction over two-thirds of the American population. This agency is notorious for racial discrimination, use of excessive force, and illegal search and seizure — in short, for treating citizens as potential enemy combatants, rather than as humans with rights and dignity to be respected and upheld.

Tell Congress to redirect funds away from deportations, detention and border militarization. The Department of Homeland Security is wasting billions of taxpayer dollars by carrying out inhumane deportations that separate families and sweep up Dreamers and Temporary Protected Status (TPS) holders. Every day, tens of thousands of people — including asylum seekers and undocumented immigrants — are detained by ICE. Congress should redirect wasteful funding away from border enforcement and the border wall, which cuts through wildlife and native lands.

We strike on May Day because:

Our ideals and principles are of peace and justice — we work for our rights and the rights of the most vulnerable. Take action and join a May Day march and rally; download or order these posters, and rise for immigrants and refugees.

PS. In July, CODEPINK will be in Cuba learning about community projects, exploring the vibrant culture, and experiencing fun at the famous Santiago de Cuba Carnival!