What Will Yoon’s Conservative Presidency Mean for Peace Processes in Korea? 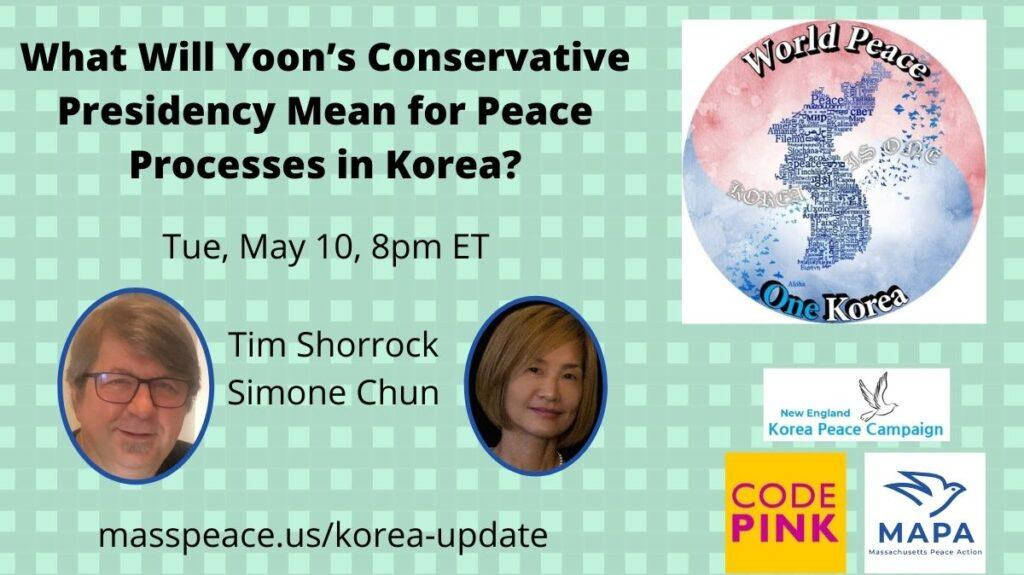 Join Massachusetts Peace Action and New England Korea Peace Campaign for a discussion on what the presidency of Yoon Seok-yeol will mean for the peace processes in Korea. The speakers will be Tim Shorrock and Simone Chun and the discussion will be moderated by Seung Hee Jeon, visiting assistant professor of Korean at Boston College and co-chair of the NEKPC.

Register HERE to receive the Zoom link to join!

Peace on the Korean peninsula has long been a cherished wish of the Korean people, ever since the armistice agreement in 1953. Since the breakdown of the Hanoi Summit in February 2019, however, peace talks between the U.S. and North Korea have remained at a stalemate. Recently, while a new cold war between the U.S. and China has complicated this already-difficult situation on the Korean peninsula, the Russian invasion of Ukraine has further confounded it, throwing its East Asian neighbors into an even more perilous situation. In this situation, a five-year term of the newly inaugurating Yoon Seok-yeol administration begins in South Korea on May 10.

Elected on the hawkish platform of preemptive strikes, Yoon has vehemently denounced taking a conciliatory approach toward North Korea, breaking with his predecessor, and signaling a serious setback in the Korean people’s efforts toward building peace. What can we, who want to promote peace on the Korean peninsula, expect from the new administration? And what can we do to achieve our goals? Join us to hear insights from two experts in the field on the prospects for peaceful reconciliation on the Korean peninsula in the next five years.