Local Report - "I'm better than you" in San Antonio

On October 3rd, a group of CodePink activists went to San Antonio to protest the arrival of Sarah Palin who was there to attend a high-end Republican fundraiser.  When we arrived, there was already a large group of  Palin fans standing in front of the hotel, holding signs and chanting her name.  Our group, being significantly smaller, chose to stand on the median, just across from the pro-Palin group.

Although much smaller in number, we were drawing a great deal of attention from passers-by and news media.  In bright pink and with signs in hand, several of us flashed peace signs at the traffic and at the group standing on the other side of the street.  Two of us, dressed as McCain and Bush - bride and groom, kissed as the crowd fell silent.   In tow was a little baby carriage with a baby Palin doll and a sign that read “Bush-McCain Love Child”.

After a few minutes of peaceful protest, an elderly man crossed over to the median.  Wearing a red white and blue shirt in the design of a Texas flag and carrying a small U.S. flag, he stepped in front of me, trying to cover up my message.  He turned and looked at me in my McCain bridal outfit.  Trying to keep things cordial, I said “Hi, how are you?”  He responded “I’m better than you.”  After the Palin fans left and the protest dwindled, that simple statement kept floating back into my head.

So our mission is clear -- to remind each other that no one person is better than another. 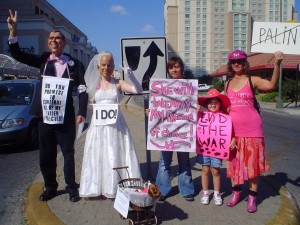