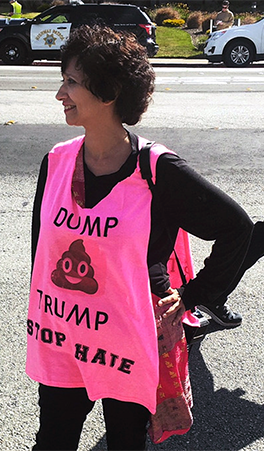 Those standing against hate continue to grow in visibility. We are excited that Ilya Sheyman, Executive Director of MoveOn.org Political Action, announced they will work to ensure Trump’s hateful and dangerous rhetoric is rejected.

“Donald Trump, the now-presumptive Republican nominee, and his hateful and bigoted rhetoric are not only a political threat but a clear and present danger to the very fabric of our nation. Trump’s campaign has been fueled by racist, bigoted, xenophobic, misogynistic and violent rhetoric that not only divides our nation but also makes us less secure.”

Brave activists continue to stand up to Trump and his hate. Laura Esquivel, visionary Mexican novelist, screenwriter, essayist, author of Like Water for Chocolate, responded to his “Taco Bowl,” speaking to his hatred with beauty and truth. Share widely!

We are joining in solidarity with our Mexican and Central American sisters and brothers standing up against walls and hate, with a Spanish language version of StopHateDumpTrump. Share with your Spanish speaking friends.

Nancy Mancias of CODEPINK disrupted him in the bay area, where the activists in the street forced him to leave his car and cross the freeway by foot to arrive at his rally.

We must continue to visibly stand against hate! Share the powerful letter by Laura and encourage your friends to join our call and share the new Spanish website.