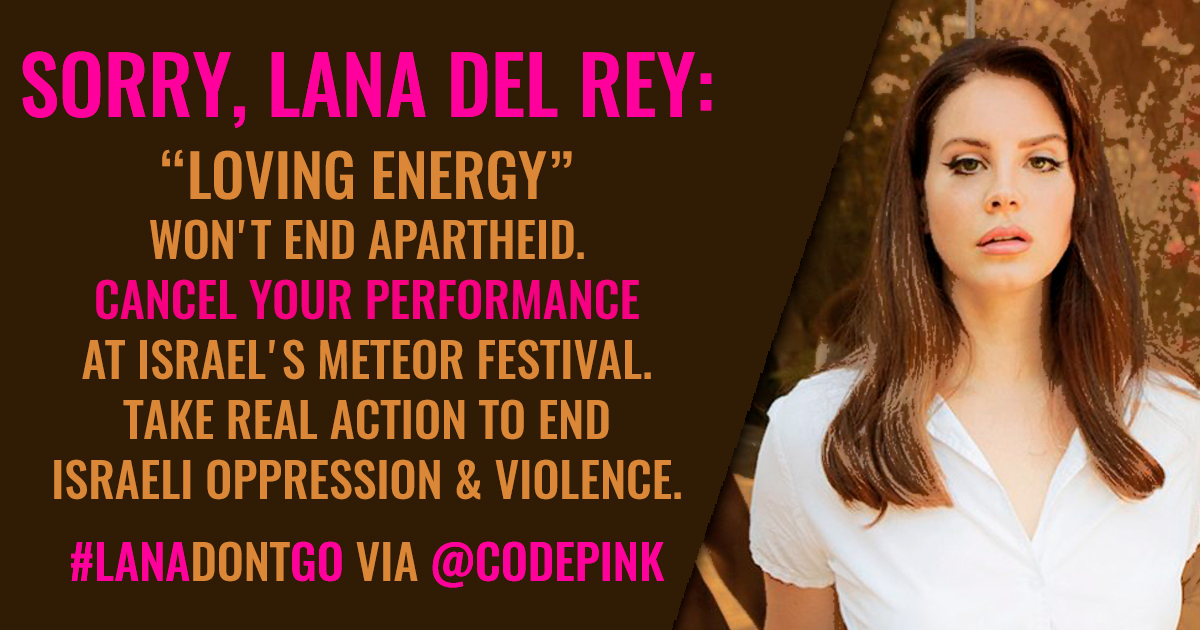 More and more artists are standing up for Palestinian rights by refusing to perform in apartheid Israel. Lana Del Rey’s music speaks to an entire generation and has earned her a following of almost 9 million on Twitter. If she goes forward with her performance in Israel, she will be using her name and influence to whitewash Israel’s crimes against the Palestinian people, including ongoing massacres taking place right now in Gaza. Lana has said that this performance isn’t a political statement. But performing in Israel is not only political, it is directly supporting occupation and apartheid.

Tell Lana to use her voice to speak up for Palestinian human rights and cancel her performance at Israel’s Meteor Festival.

You said your performance in Israel would be performed with “loving energy w a thematic emphasis on peace.” If you really want peace, you must respond to the Palestinian call for human rights, dignity and freedom by canceling your performance at Israel’s Meteor Festival.

Palestinians living under Israel’s system of occupation face a nightmare of daily humiliations, roads divided between Jews and Palestinians, a military court system where children are taken from their homes in the middle of the night and abused, and massacres of civilians. Israel openly institutes two sets of laws for two groups of people – the definition of apartheid – and is the only country in the world with a juvenile military court system.

Palestinians are calling on the international community to support their struggle for freedom and equality in the same way that was effective in ending South African apartheid. Just earlier this month, US musician John Maus, Scottish singer-songwriter Alun Woodward, English musicians Nadine Shah and Richard Dawson, the post-punk trio Shopping, and Welsh artist Gwenno made headlines when they cancelled their appearances at Berlin’s Pop-Kultur because of the Israeli Embassy’s involvement with the show.

You are one of the headlining acts at Israel’s Meteor Festival. Canceling your performance would speak volumes to the international community and make a significant impact towards ending Israeli oppression and violence. Please join the artistic boycott of Israel by canceling your Israeli show.