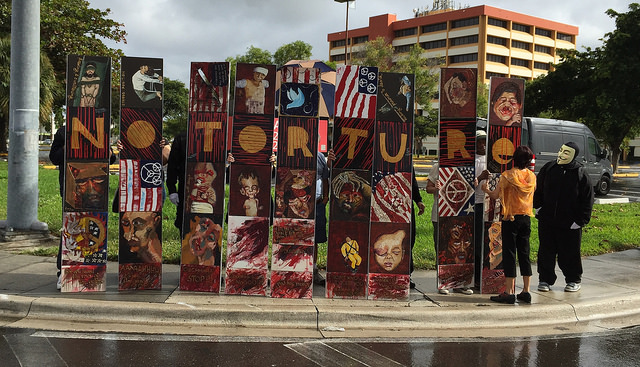 CODEPINK will join Interfaith Communities United for Justice and Peace (ICUJP) to call for the closing of Guantanamo! Since its opening on January 11, 2002, Guantanamo has been notorious for its many violations of the Eighth Amendment to the U.S. Constitution (“no cruel and unusual punishments inflicted”), Common Article 3 of the Geneva Conventions, UNCAT (the UN Convention Against Torture) and U.S. Code 2340(a). While detainees are supposedly no longer being tortured, they were kidnapped by the U.S. government, arrested without charges, imprisoned without trial, tortured, and are held in a state of perpetual imprisonment, with even those prisoners approved for release by the U.S. Department of Defense having no clear path to freedom.

Join us on January 11, 2018 - the 16th anniversary - in front of the Federal Building in downtown Los Angeles to protest the continued existence of the internationally infamous Guantanamo prison.