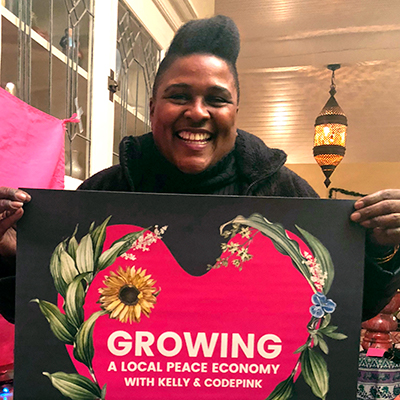 Kelly is the Local Peace Economy Organizer with CODEPINK based in Oakland, CA.

She utilizes her love of writing, storytelling and sharing healthy, living foods to create powerful, on the ground shifts of consciousness and build community globally.

Kelly began her career by editing and publishing Freedom Rag in Chicago, Illinois. This groundbreaking hip-hop publication was a quarterly, cultural arts journal devoted to arts and letters of the African-Diaspora.

She segued to bringing conservatory level arts programming to the children of New York City Parks and Recreation Centers in Harlem.

Through this program Kelly brought world renowned musicians, scholars, painters and activists to share their craft. She also collaborated with the kids to plant the first children's gardens in Harlem and supported them in publishing their own annual magazine.

She continued this trajectory by delivering similar programming to the the children of farm workers and homeless children in Southern California via The Living Love Foundation, where she acted as Director of Programming and Development.

In the Bay Area Kelly joined forces with food justice giants People’s Grocery and later Planting Justice in the work of reminding community about the power of Plants as Medicine and growing their own food.

Currently she is focused on “moving nutrition through the community,” by engaging committed, creative, sustainable systems change around food access for the citizens of East and West Oakland. She does this work with The Electric Smoothie Lab Apothecary aka TESLA, which she founded.

In 2017 her book, “Until the Streets of the Hood Flood with Green, The Story of the Electric Smoothie Lab Apothecary” was published by Reimagine and Freedom Voices. She has taken her book and the message to the people of New York City; Berlin; Copenhagen; Berkeley; Long Beach; and Birmingham, UK and Oakland, Ca.

She sits on the Board of Directors for Planting Justice and volunteers daily with The Food Mill where she picks up and redistributes imperfect produce at her free food store. She also delivers compost and coffee grinds back to the Earth.