UPDATE: Kamala Harris has announced she will not be attending AIPAC! 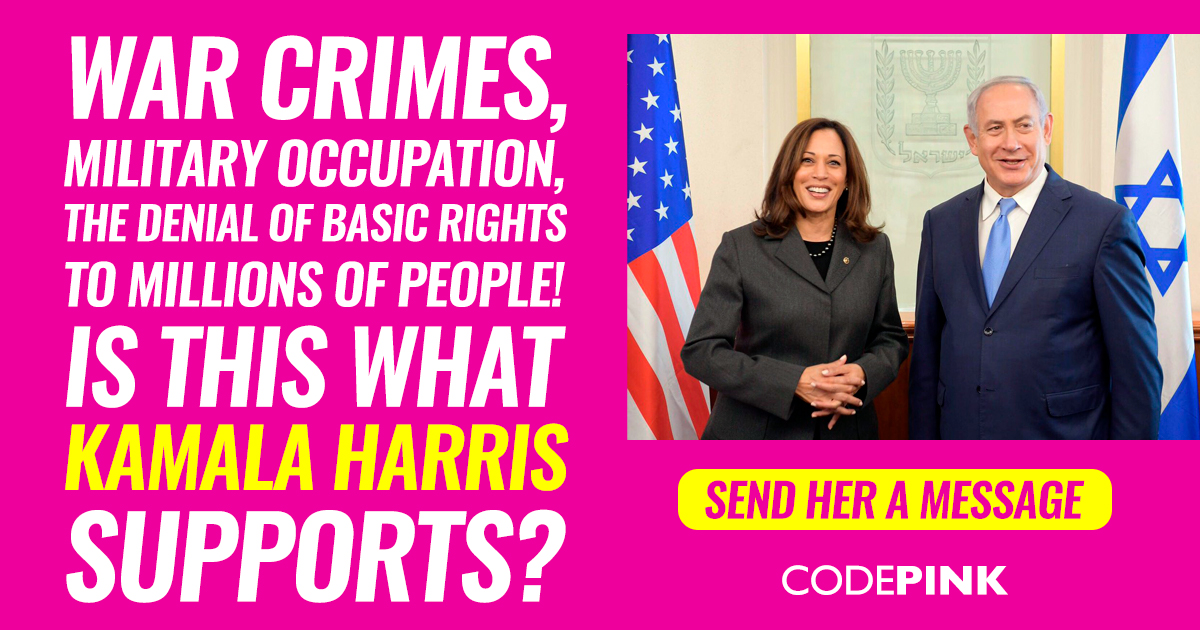 Senator Kamala Harris is running for president and she wants to be considered a progressive candidate. But for multiple years in a row, she has spoken at the annual American Israel Public Affairs Committee (AIPAC) conference and in November 2017 she traveled to Israel and met with prime minister Netanyahu.

In her 2018 speech at AIPAC, Harris told a group of over 3,500 students that the historic Selma to Montgomery march for voting rights is what inspires her to work with pro-Israel advocates.

“The vast majority of people understand the importance of the State of Israel. Both in terms of its history and its present in terms of being a source of inspiration on so many issues,” she said calling Israel “one of the best friends we [America] could possibly have.” When asked what drives her to have such strong support for Israel, she answered by saying she had just returned from a commemoration in Selma and that the actions in 1965 of people marching “together hand in hand to fight for everyone’s civil rights” inspires her today to, “commit ourselves to building bridges. And that means building the coalition, and building the connection between all of us to fight together and that’s on the issue of Israel.”

Sorry Senator Harris — the march from Selma to Montgomery was about equality for all people while support for Israel is about maintaining a blatant system of apartheid that denies basic human rights, including the right to vote, to millions of people.

Tell Kamala Harris if she wants her 2020 presidential platform to be about equality and peace, she needs to reverse course immediately and support human rights, not Israeli apartheid. Prime minister Netanyahu, who will be speaking at AIPAC this year, has even gone so far as to form an alliance with the Otzma Yehudit (Jewish KKK) party.

Tell Senator Harris to cancel any talks she is scheduled to give at this year’s AIPAC conference and make a statement clarifying that she will not attend the March 24-26 conference as doing so is contradictory to the values of dignity, justice, and equality.

You say your 2020 campaign for president is about hope, justice, respect, dignity, and
tolerance for all. But in past years you have shown support for AIPAC — an organization that demands unquestioned diplomatic support and ever increasing amounts of financial and military assistance for Israel — and Israeli prime minister Benjamin Netanyahu.

As you are likely aware, Netanyahu recently formed an alliance with the Otzma Yehudit (Jewish Power) party, commonly known as the Jewish KKK. This action by Netanyahu was so appalling that almost every Jewish organization in America condemned it. AIPAC supported a statement in response by the American Jewish Council (AJC) calling the views of Otzma Yehudit “reprehensible" but they are is still having Netanyahu speak at their 2019 conference.

Numerous Jewish groups, including Americans for Peace Now, are calling on AIPAC to disinvite Netanyahu until he breaks with the Otzma Yehudit party. Whether or not Netanyahu changes course, and whether or not AIPAC disinvites him from the conference, as someone who opposes racism and violence, we ask you to refuse to attend the 2019 AIPAC conference.

On March 1, 2019, the United Nations Human Rights Council released a report stating that Israel may be guilty of war crimes in Gaza. presence March 30, 2018, and December 31, 2018, the Israeli military killed 189 mostly unarmed Palestinians, including children, journalists, medics, and disabled persons, and injured more than 9,000 others. The investigation found that targeting of children, journalists, medics, and disabled persons was intentional and, despite the fact that they posed no threat, they were shot.

Speaking at AIPAC’s 2019 conference would send a message that you support shielding Israel from accountability for war crimes and the ongoing system of military occupation and apartheid they impose on the Palestinian people. It would be in complete opposition to the values of equality, dignity, and peace that you say you want for America and its role in the world.

I look forward to a statement from you that you will refuse to attend AIPAC’s March 24-26, 2019 conference in Washington, DC.