In 2005 I joined a peace protest in Washington, where we marched for an end to the Iraq war.  One image I will never forget is that of a tall, robust middle-aged man draped in an American flag on which he had written with a black magic marker, “Iraq, we’re sorry.”  I went up to him, telling him how moved I was by his gesture.  With tear-filled eyes, he responded,  “I didn’t know what else to do.”

On the tenth anniversary of the Iraqi war, Americans have good reason to feel even sadder and more remorseful than the flag draped man at the Washington Monument did eight years ago. The list of US war crimes is staggering, probably no where as heinous as in Fallujah where the heavy pelting of white phosphorous bombs account for birth defects that medical experts claim are 14 times worse than the birth defects caused by the bombings of Hiroshima and Nagasaki.  Babies born with two heads, multiple limbs and organs outside their bodies are not uncommon in Fallujah.

A recent study released by Al Jazeera reports that the majority of Iraqis feel like their lives were better under Saddam than they are today. Iraqis point to their crumbling infra-structure, sectarian violence and limited access to jobs and health care as just a few examples of how their lives have worsened. 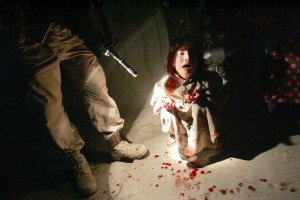 Samar, age 5, after seeing her parents killed by US troops

For those of us who are troubled by what our country has perpetuated in Iraq, there is something we can do to show Iraqis that not all Americans are indifferent to their plight.  Taking a lead from Dennis Kucinich, the former Congressman from Ohio, and Kathy Kelly, the American peace worker who was living in Iraq during “shock and awe,” we can organize a movement to hold Truth and Reconciliation trials, modeled on those in South Africa, where perpetrators of war crimes had to face their victims and ask for forgiveness.

It will be a long uphill struggle to convince the US government of the merits of restorative justice, but local communities can take up the cause without delay.  They can stage mock trials, like the women did at the 1995 UN Women’s Conference in Beijing where female victims of rape in Bosnia, Rwanda, and Palestine testified before a large international delegation of women, describing the atrocities they experienced.  Local communities could gather stories from torture victims, mothers in Fallujah, displaced Iraqis, and children, now young men and women, who were forced to grow up in neighborhoods marked by days and nights of bombings.  We can hear these stories in an audience of neighbors, bearing witness and perhaps writing to specific Iraqi individuals and families to ask forgiveness.

Another way to reach out to Iraqis is to get involved with the new organization, Right to Heal (righttoheal.org), founded on the tenth anniversary of the Iraq war to assist American military veterans of Iraq to receive the financial and emotional support to which they are entitled.  A program within Right to Heal is a joint venture led by an Iraqi female activist, Yanar Muhmmed and Maggie Martin, an American veteran of Iraq.  Their stated intention is to provide services for women in Iraq where the war has taken a particularly heavy toll: young women unable to find jobs in a dwindling job market who turn to sex trafficking; young mothers raising children with birth defects; women with breast cancer, which has risen exponentially due to chemical residue from American bombs.

To quote Dennis Kucinich, “After a decade of war .   .   . we must create a culture of peace.”  The time for atonement is now. 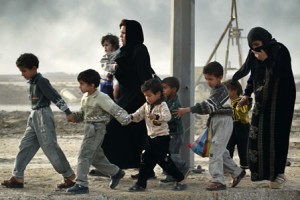