International Solidarity & History in the Making 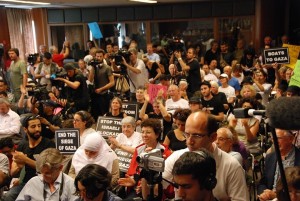 Today we had a great international press conference. There were representatives from Greece, Sweden, France, Norway, Canada, Spain, Turkey and of course, the U.S. The room was packed with press and passengers; there was really a feeling that we are part of something historic.

Our US speakers were Ann Wright and Alice Walker, as well as Huwaida Araf, who was not representing the U.S. boat but the international flotilla.

Ann talked about the efforts of the Israeli government to stop our boat, the bogus complaint against us launched by the Israeli legal center. (This is the same center, by the way, that has been suing us, trying to get insurance companies not to insure and pushing satellite companies not to help us get wired on the boat.)

Alice Walker gave poignant comments about the fight against slavery in the US, and how people from other nations came to support that struggle. “My government has failed us, and is ignorant of our own history,” she said. “When black people were enslaved for 300 years, it took a lot of people from outside our community to help free us. This is a fine tradition--going to help people who need us anywhere on the planet. I look at you in the room; if we have salvation as humankind, it is in the room.”

Huwaida Araf spoke first as a lawyer, stating the reasons why the closure of Gaza is illegal. Then she spoke as a Palestinian, making it clear that the flotilla is not about humanitarian aid but it is to support Palestinians demand for liberation. She chided Hillary Clinton and UN Secretary General Ban Ki-Moon for their criticisms of the flotilla.

Henning Mankell, the famous Norwegian mystery writer spoke as well. Assuming there were Israeli agents in the room, he said, “If there is someone in this room who reports directly to the Israeli government, please note that there is no declaration of war here; what we represent is a declaration of peace. Try, for once, to tell the truth.” 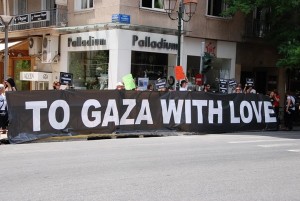 Our U.S. delegation made signs during the conference that said, “Let Us Sail to Gaza.” After the press conference, we went outside and unfurled our enormous 40-foot “To Gaza With Love” banner. To the delight of the press, we also broke out into song. “I love the U.S. delegation,” a French journalist told me. “You have signs, you sing, you are very animated.” Indeed, with Kaleo accompanying us on the trumpet and Alice Walker joining us in song and dance, we gave a great performance.

Meanwhile, with rumors swirling wildly of boats being sabotaged and/or given orders not to leave the various Greek ports, we have no idea what boats will be able to meet up at sea with the French boat and the Irish boat that are already on their way to the international meeting point. We had inspectors on our boat today but no word yet from them about whether or not they found us “seaworthy”. We obviously have to take this a day at a time.