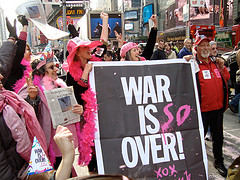 CODEPINK has always had a magical, trickster energy, from the very name of the organization satirizing the now-retired and mostly long-forgotten color-coded alert system, to our presence at locations where the president, the head of the Department of Homeland Security, the Chair of the Senate Intelligence Committee, or other decision-makers appear. Those locations include congressional hearings, fundraisers in hotels, international conferences, homes in fancy neighborhoods, and even golf courses -- call it the geopolitical pushback of the women in pink.

CODEPINK's energy sometimes takes the form of poetry. For your inspiration this week, I celebrate the work of poet Brenda Hillman.

A professor of poetry at St. Mary's College in Moraga, CA Brenda is the author of several collections of poetry including two, "Practical Water" and "Seasonal Works With Letters of Fire" which contain poems about her activism with CODEPINK. "In A Senate Armed Services Hearing" begins with a whimsical description of General Petraeus:

"From my position as a woman/I could see/the back of the General's head, the prickly/intimate hairs behind his ears"

Many CODEPINKers, since the organization began in 2002, have sat observing, as Brenda has done numerous times, in congressional committee chambers. Sometimes we noisily disrupt (what I call "supplement") the testimonies of so-called experts on war, security and defense, but more often we simply and silently testify with our pink presence to the people's desire for peace. Our silent testimony often unnerves the men (and the occasional woman) who sit at the witness tables before the committees; I was once reproached and threatened with arrest by a think tank factotum for sighing in a House Armed Services subcommittee hearing.

with fantasies of turning into a fly buzzing around the room, and then

"...the sense/the goddess Ishtar [from ancient Babylonia, which became the modern country of Iraq] had come down/to bring her astral light with a day-wrinkled plan..."

Brenda brings the myth of the ancient land into what seems the most prosaic, banality-of-evil occasion, adding to a cliched remark during a pro-forma nomination hearing ("General I'd be interested to know") with her devastating commentary:

"Then someone -- Clinton I think it was/but it might have been Bayh --/asked whether this confirmation will/give breathing space for the new/General to unoccupy (how do the dead breathe, Senator..."

In "Seasonal Works With Letters On Fire," her tone is often more energized, as befits a work on the theme of fire, the final collection in a four-book series on the traditional "elements" of earth, air, water and fire. In "Mists from People As They Pass: at the Port of Oakland" she assures us:

What prose - especially the empty assertions and bloated rhetoric of those who speak for The State -- sets up as impenetrable barriers, poetry seeks to "unravel" with metaphor, with mockery, with mystery, with the music of language. As with John Lennon's famous quote: "War is over/if you want it", poetry describes the reality that has not yet come to pass, and creates space for the imagination and daring to bring it into being.