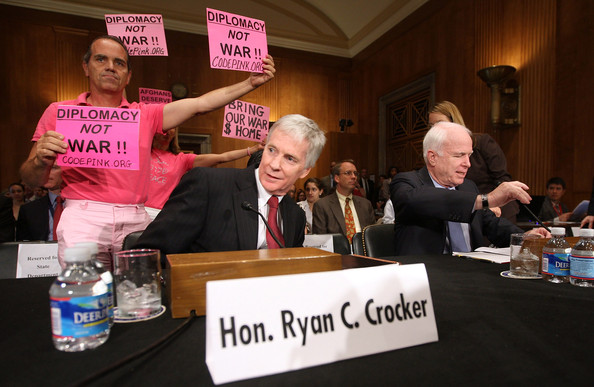 Tighe Barry makes his position known at the confirmation hearing of Ryan Crocker, US ambassador to both Iraq and Afghanistan.

As the US government, once AGAIN, decides whether to bomb Iraq in response to an armed uprising in that oil-rich, war-poor, DU-contaminated country, more than ever we need inspiration, that deep in-breath of hope and determination.

For me as a military family member as well as a longtime CODEPINK-er (I "joined up" in spring 2003, about 7 months after its beginnings), the beating of war drums on the media, featuring the same-ol', same-ol' bunch of neo-con know-nothings who shilled for war over a decade ago, brings up all too many terrible memories. My colleagues Nancy Mancias and Lisa Savage have asked me to write from that perspective, and I will do so in an upcoming post.

For now, as we gear up for Don't Bomb Iraq rallies all over the country, I'll just make a list of what inspires me today:

A quick email from my DC buddy, now back in Phoenix, Arizona Liz:

Seeing the notices of hastily organized vigils and marches pouring in to the @codepink twitter account, from around the country. Fresno and Hayward, CA! Portland, ME! And many other places far from "usual suspects" San Francisco, NYC and DC - though those are of course important too.

The people of Iraq need and deserve the world's compassion and assistance, including with cleanup of places contaminated by Depleted Uranium munitions (or as I call them, "Not Depleted Enough Uranium"), which have caused the world's worst rate of birth defects in Fallujah. They do not need, and it gags me to even have to write this, more US munitions falling down on their land, their rivers, their still-mostly-destroyed infrastructure, their homes and their bodies. "Targeted" air/drone strikes always wind up killing civilians. "Smart" bombs aren't smart. "Limited" military "engagements" (and what a pretty euphemism THAT word is) always somehow become less limited and more costly and dragged-out.

And the overdeployed, overmedicated, under-attended-to US troops - soldiers, marines, airmen and sailors - deserve the right to heal, not the order to return to combat.

Do what you can. Bring a friend to a rally tomorrow.

As a woman who mentored (and sometimes hectored) me during the early years of the US criminal occupation of Iraq always used to say: Do something for peace today.