I have relatives in North Korea 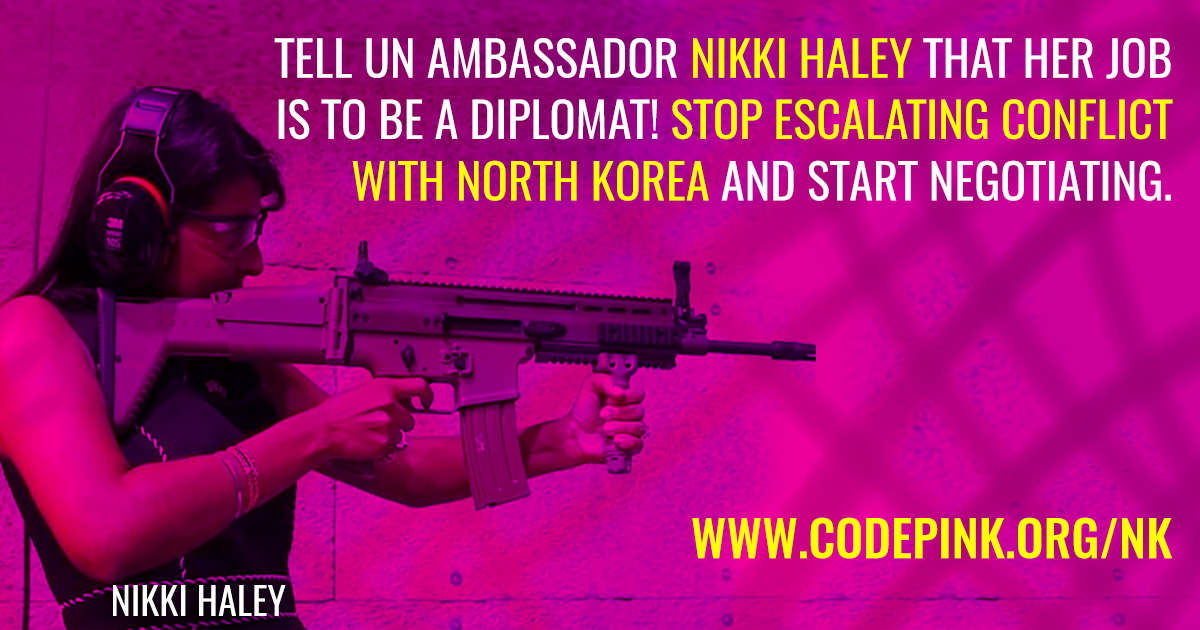 As an immigrant from South Korea who has traveled to both South and North Korea to visit friends and families, the current crisis makes me profoundly sad and anxious. North Korea is not just one man, Kim Jong Un, but 25 million people who are at risk of annihilation, just like 50 million people are at risk in South Korea. About 100,000 of us in the Korean-American community have family members in North Korea. We worry about our family members on both sides of the border.

For us, the ONLY solution is dialogue, starting with a freeze for a freeze: North Korea would freeze its nuclear and missile testing in return for the United States and South Korea freezing their military exercises. Please join me in contacting our nation’s top UN diplomat, Nikki Haley, and urge her to start acting like a diplomat. Stop threatening war with North Korea and starting negotiating.

As US Ambassador to the United Nations, Nikki Haley has been a disaster. Her statement that Kim Jung Un’s “abusive use of missiles and his nuclear threats show that he is begging for war” is appalling. North Korea has been saying over and over again that it might put its nuclear weapons and missiles on the negotiating table if the United States would end its own threatening posture. This fact has been completely obscured by US officials, as well as the mainstream media. I encourage you to read Tim Shorrock’s excellent historical summary in The Nation, Diplomacy With North Korea Has Worked Before, and Can Work Again.

The U.S and South Korea just completed provocating war games simulating an attack that would “decapitate” the North Korean leadership. So it is logical that the North would respond with more weapons tests. This cycle must be broken. The next round of US-South Korean military exercises are not scheduled until March. This would give the US government six months to ratchet down the tensions.

Nikki Haley is being paid by us, the US taxpayers, to find peaceful solutions to global conflicts. Instead, she said that North Korea’s actions are “quickly closing off the possibility of a diplomatic solution.” The Trump administration has never even tried a diplomatic solution—it has only tried sanctions that hurt the lives of ordinary Koreans, war games, deployment of the THAAD missile system in South Korea and threats of a catastrophic war. These have not and will not work; they only embolden the North Korean leadership.

Can I count on you to act and show compassion for our friends and relatives on the Korean peninsula? Please send an email to Ambassador Haley telling her to stop escalating for war and start negotiating for peace.And share this message on Facebook and Twitter.