How can they let this go on? 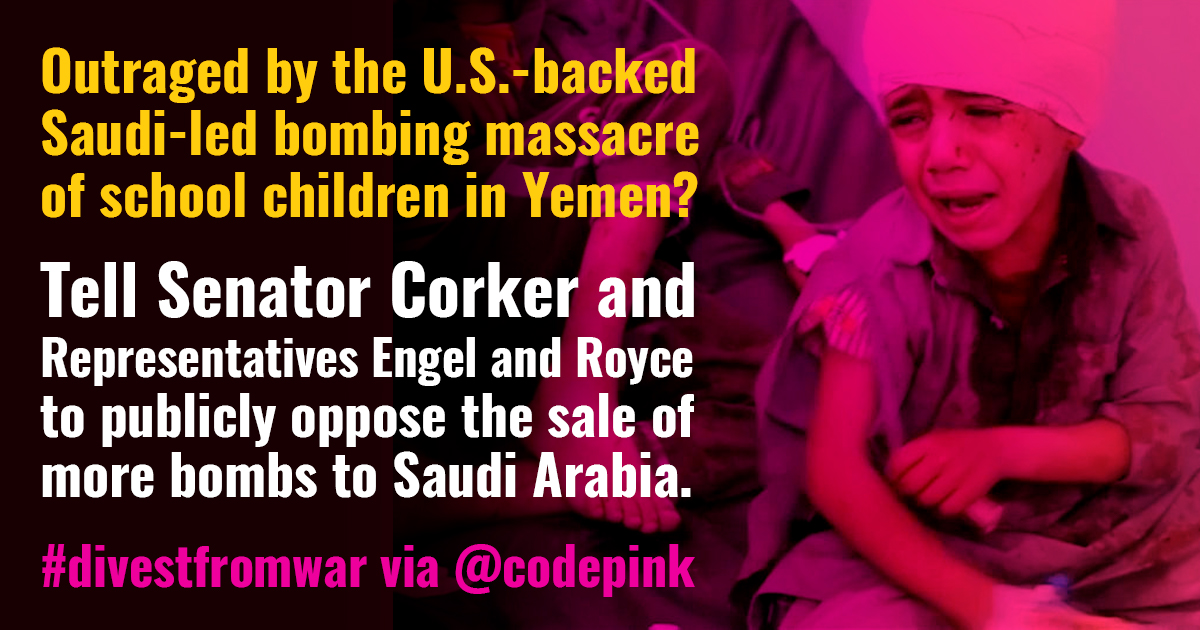 We continue to mourn the 40 children killed last Thursday in Yemen when a Saudi airstrike hit their school bus. The children were on a field trip to celebrate their graduation from summer school. They were chatting and laughing, until the bomb fell. On Monday, a mass funeral was held.

Last week, right after the bombing occurred, we filled the State Department voice mailbox with demands that they condemn the atrocity. But the United States has refused to comment on the terrorizing of Yemeni civilians. Now we need your help to get Congress to take action!

We want the heads of the Foreign Relations Committees in Congress to publicly oppose the sale of more bombs to Saudi Arabia. Senator Bob Menendez, ranking Democrat on the Senate Foreign Relations Committee, already has done this. Call on his Republican colleague, Senator Bob Corker, and House leaders, Representatives Eliot Engel and Ed Royce, to join Senator Menendez in placing a hold on the sale of more high-tech munitions to the Saudis.

The Saudis have been committing war crimes in Yemen since 2015, bombing civilians in marketplaces, hospitals, schools, and homes, and blocking the entry of humanitarian aid. They have created the worst humanitarian crisis on Earth. According to Yemen Data Project, during the month of June alone, the Saudi-United Arab Emirates coalition carried out 258 airstrikes on Yemen — and nearly one-third of those strikes hit residential areas. Bombing a bus full of young children is grotesque. It is unacceptable for the U.S. to continue providing weapons for such massacres. Ask Republican Senator Bob Corker, and House leaders, Representatives Eliot Engel and Ed Royce, to join Senator Menendez in placing a moratorium on the sale of more high-tech munitions to the Saudis.

For the sake of the dead, and with hope to prevent further atrocities, we must take action.