Her hips don’t lie, and neither does her voice for justice 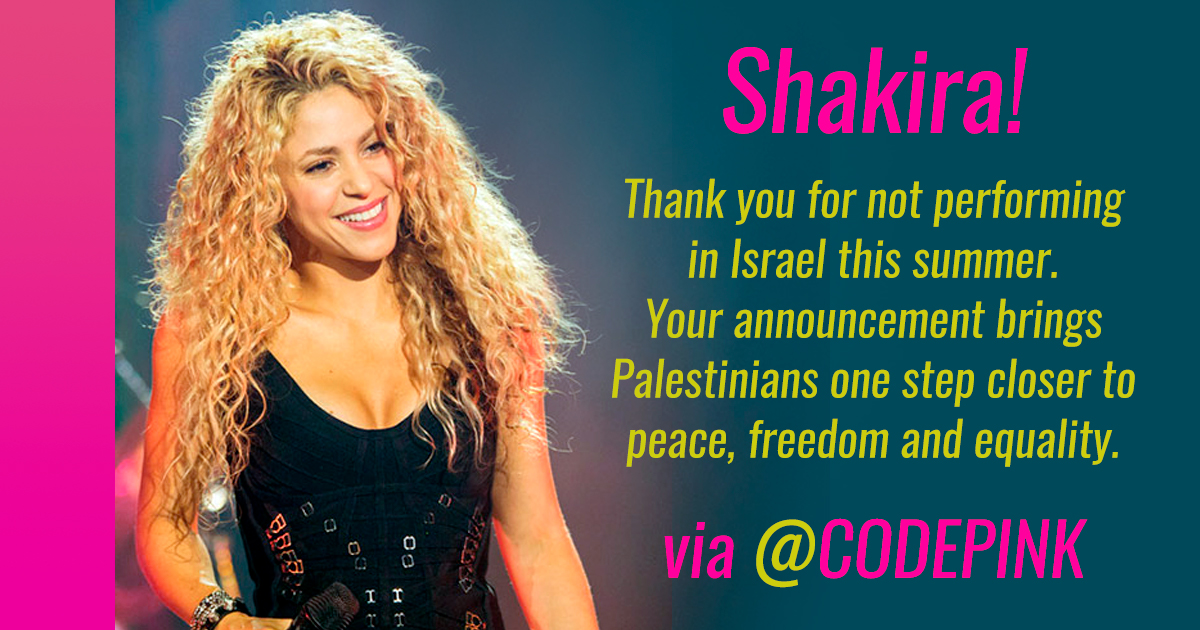 Only a few hours after we put up our video asking her to cancel, we received good news; Shakira will not be performing in Tel Aviv this summer. Instead, she is joining the ranks of Lauryn Hill, Lorde, Natalie Portman, and many others artists who have used their voices to say no to Israel’s system of occupation and violence.

Add your name to our thank you letter for Shakira. Had she gone ahead with her concert in Israel, it would have acted as a passive endorsement of Israel’s recent massacre of over 100 Palestinians in Gaza.

Shakira is a powerful advocate for children. A goodwill ambassador to UNICEF, she declared that “children should not pay the price of war. I only hope that sometime soon we can have a world where human needs and human rights rise above flags and borders and numbers and selfishness and racism.” Now, she has put those words into action by not allowing her talents to “artwash” Israel’s crimes against children. Each year, the Israeli military arrests between 500 and 700 Palestinian children. They are physically and emotionally abused, subjected to the only juvenile military court system on earth.

Help us send a big thank you to Shakira. We will deliver your message to her personally.

Exactly what happened with Shakira’s Tel Aviv concert is not clear. News that the concert was no longer happening came from her promoter on Twitter: “the media has incorrectly reported that Shakira will be performing in Tel Aviv this summer.” We don’t care how it came to be; we care that Shakira will not be performing in apartheid Israel. And we know that it was our work and the work of our partners that made it happen.

Palestinians are celebrating and you should too.

Onward towards freedom,
Ariel and the entire CODEPINK team