He Imprisoned his cousin? #FreeThePrincess 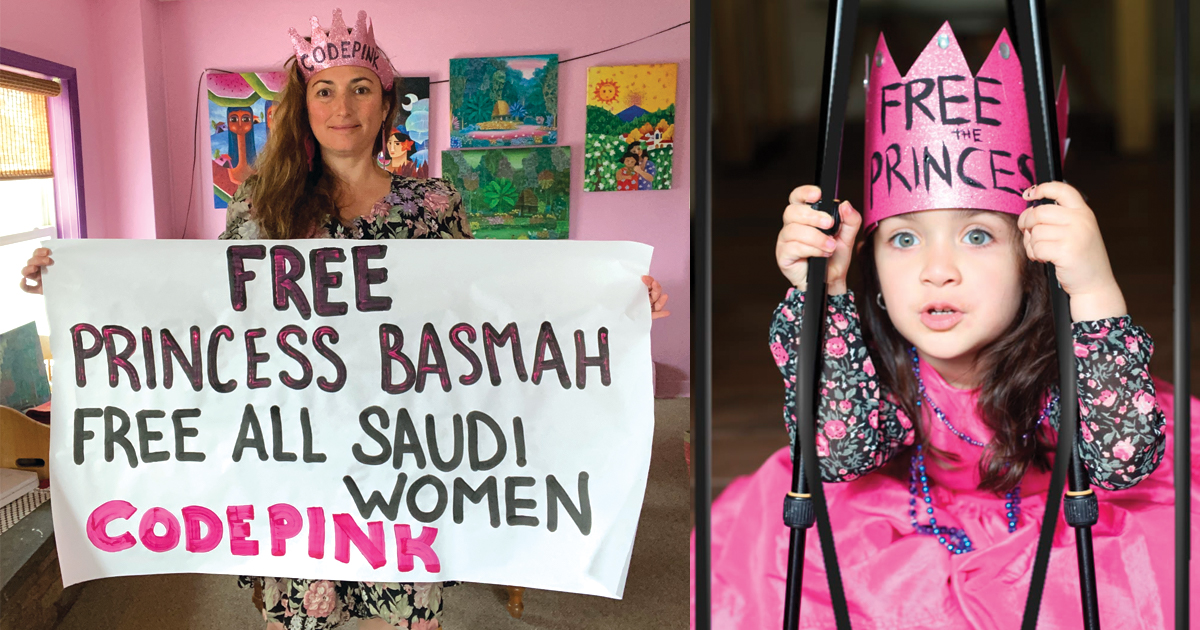 It’s been over a year now since the absolute-ruler-in-cruelty Crown Prince Mohammed bin Salman (MbS) placed his own cousin, Princess Basmah bint Saud, in prison.

Advocating for women’s rights and reforms in Saudi Arabia.

Tell the U.S. Department of State to urge Saudi Arabia — a close ally and friend of the U.S. — to release the princess.

Then take to social media with pictures and the hashtags #FreeThePrincess and #StopSaudi. See examples on CODEPINK’s Instagram below.

Basmah is a 56-year-old businesswoman and outspoken member of the royal family. Though we have no idea what she did to upset her crown prince cousin, we do know that while she was living in London, she was an outspoken advocate for human rights and the need for change in Saudi Arabia. In 2012 she told the BBC that Saudi Arabia should have a constitution “that treats all men and women on an equal footing.” We also know how notorious MbS is for imprisoning his critics, including those women who dare to campaign for their basic rights.

Basmah was about to travel to Switzerland for medical treatment when MbS ordered her arrest and detention last March. "I am currently being arbitrarily held at Al-Ha'ir prison without criminal, or otherwise any charges," Bashmah managed to write onto her Twitter account last Wednesday from her prison cell. “I was abducted without explanation together with one of my daughters and thrown into prison,” she wrote, begging her cousin and his father, the king, to release them. “My health is deteriorating to an extent that is [severe], and that could lead to my death,” she pleaded.

Thankfully, the tweets were noticed and documented before mysteriously disappearing from her Twitter account two days later. Whether for Princess Basmah or imprisoned Saudi women’s rights defender Loujain al-Hathloul, we all need to be the voices of the Saudi women that MbS silences. Tell the U.S. Department of State to urge Saudi Arabia to release Princess Basmah, Basmah’s daughter, Loujain al-Hathloul, and all the other imprisoned Saudi women’s rights activists. Then take a picture of yourself with a crown and/or sign and post it on social media with the hashtags #FreeThePrincess and #StopSaudi.