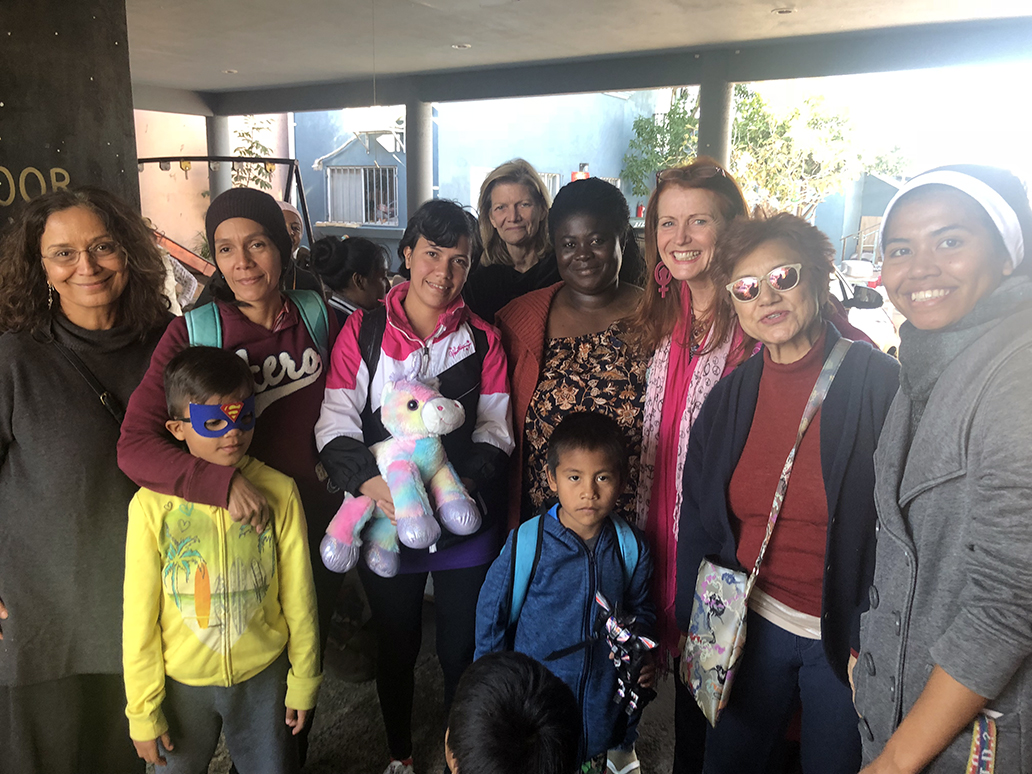 December was the month CODEPINK; Growing A Local Peace Economy was dedicating our outreach and organizing to being ally for the Asylum Seekers who had just arrived in and around Tijuana below the US San Diego border.  The Local Peace Economy community in LA took on collecting what Paula, Kelly and Xan learned was needed while they were there (see previous blogs) and also collecting funds for much needed hot meals. 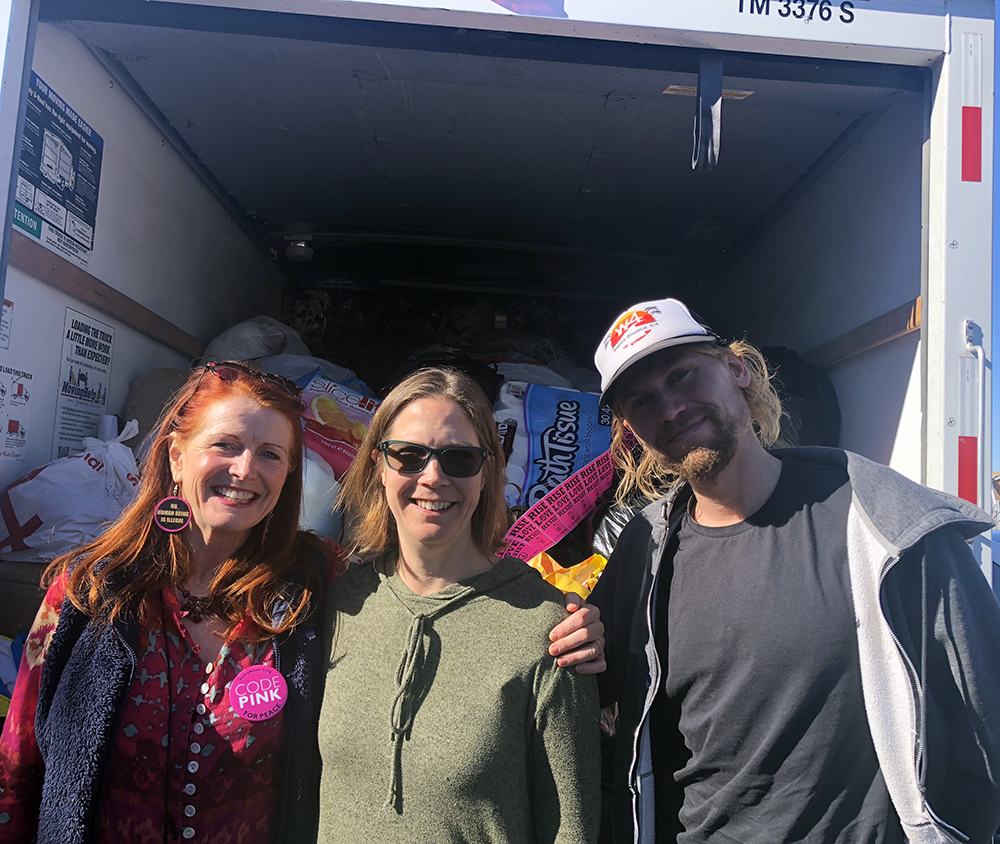 As Patricia talks about in this little video, it was the intent of the peace economy gatherings to create capacity for just these moments.  We talked about the disasters that will occur out of global inequality, climate change, $1.4 Trillion in weapons sold each year and constant war.  Not to mention all the money that funds war that should be alleviating human suffering instead of creating it. We have gathered every month for the past few years, learning about the values of a peace economy, practising them together, deepening our relationship and trust, weaving a community of those who invest their time and energy in the practices of peace locally.  We reached out to our friends and that outpouring of generosity was overwhelming.  By overwhelming I mean, we started as the idea of a few cars driving down to take what we collect.  But as four rooms at my home and the CODEPINK house filled we realized we needed a truck.  We learned from others that taking that much across the border would be taxed so we outreached for more cars to help us ferry all we collected across the border.  It took five hours to organize the donations and fill the truck on Friday night.  But at 8:00 am on Saturday our caravan of support headed south. People trusted us with their outpouring of generosity so it took research to find out how to make sure it got where it was most needed. In the process, we learned how much is given and how much is needed. We are part of the coalition sanctuarycaravan.org.  An amazing organization that works as a hub of information and connection.  Those who have a few days, a week, a month, can connect immediately to what is needed. 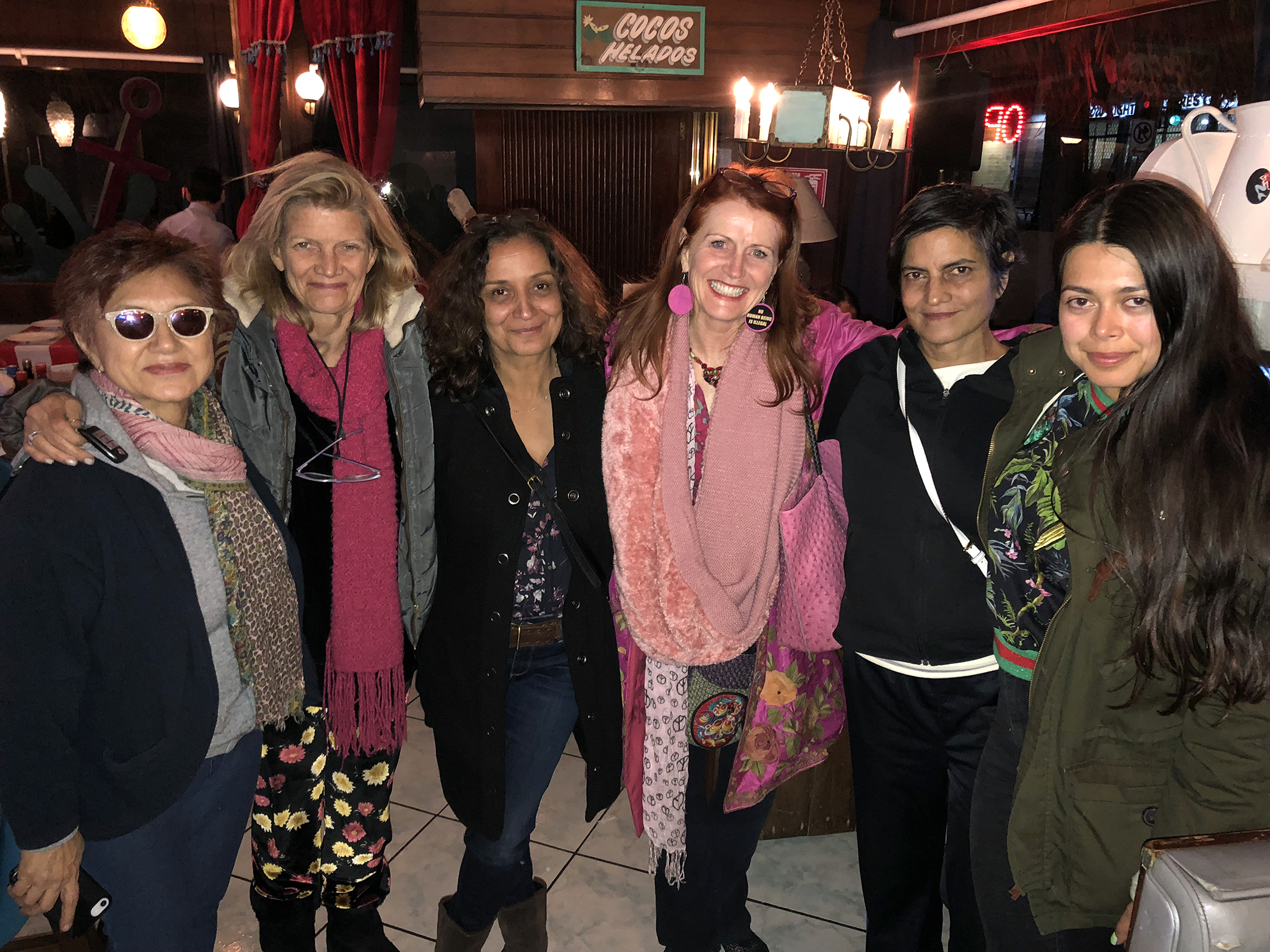 The situation in Tijuana is always in motion.  The police move people, they are rained out of a location, some places get needed support and move from desperate to stable while another moves to desperate.  Supporting almost 10,000 people in a process that is long, legal, complex and set up to fail for them is no easy task. Each story is powerful, heart wrenching and complicated. Because we had done a collection and were not coming down to volunteer we decided not to burden the Sanctuary Caravan team and figure things out ourselves. Arriving at the border we learned about Op Carrito/granny cart.  This is a group of 91 volunteers who work on both sides of the border to get supplies across and to who needs them.  People show up in a parking lot at the pedestrian entrance and others with granny carts fill them up and cross, back and forth, with those working the TJ side there to pick up and deliver.  It is beautiful.  Generous. And a peace economy. We filled up 6 cars and headed across; Shauna who lives in San Diego and was part of the early days of CODEPINK in Minnesota took all the food as there is constant and desperate need for food.  She knew just where to deliver it. 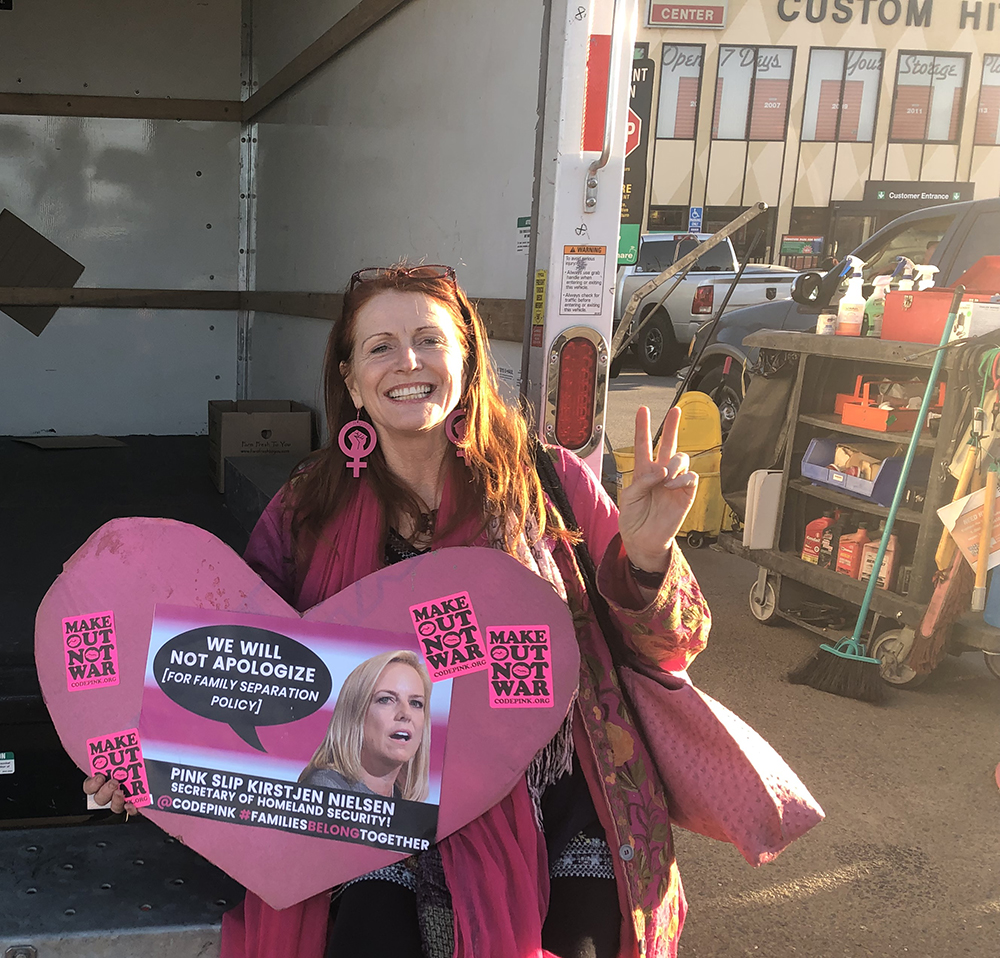 The rest of us crossed and met at Enclave Caracol a hub for those in need and those offering.  Read more about them in Kelly’s blog. At Enclave you get a glimpse of how much there is to do and how much is being coordinated.  Volunteers are arriving from around the world and dispatched.  Locals are serving as translators and guides.  We were assigned Monica who immediately went to work finding out the morning intelligence on who needed what.  Clothes were needed at El Barretal which is 45 minutes south at a concert venue where about 5,000 of the Asylum Seekers are outside in tents.  A local TJ resident, Angie, a transplant from Oklahoma drove the clothes down as we needed to do deliveries nearby to get across the border for another batch.   Dede, Pat and Anne filled up their cars with what was remaining from our two and headed to Ejército de Salvación. (read about their experience).

We had to go back to the U-haul to refill. Little did we know that crossing the border was a multi-hour experience.  With heartbreaking women and children begging outside our windows for the hours we crawled along.  We were all crying as we met at the U-haul. We loaded up with what we learned was needed at the youth center; they had 40 boys and needed blankets and coats.

Cars filled to the brim we set out again. GPS is sketchy in TJ so we drove around lost for 45 minutes and finally connected with our guide Paula Kahn, former CODEPINK team member who helped produce the Iraq Tribunal. Paula has been in TJ for the entire month.  She guided us to a delicious place for dinner and mescal.  Our first meal of the day we finally felt nourished and all three cars headed to the boys.  It was late but they were excited to let us in and quickly unloaded the supplies with joy and hugs for all. Too many sad stories from these boys to share here, not my place, but they captured our hearts. 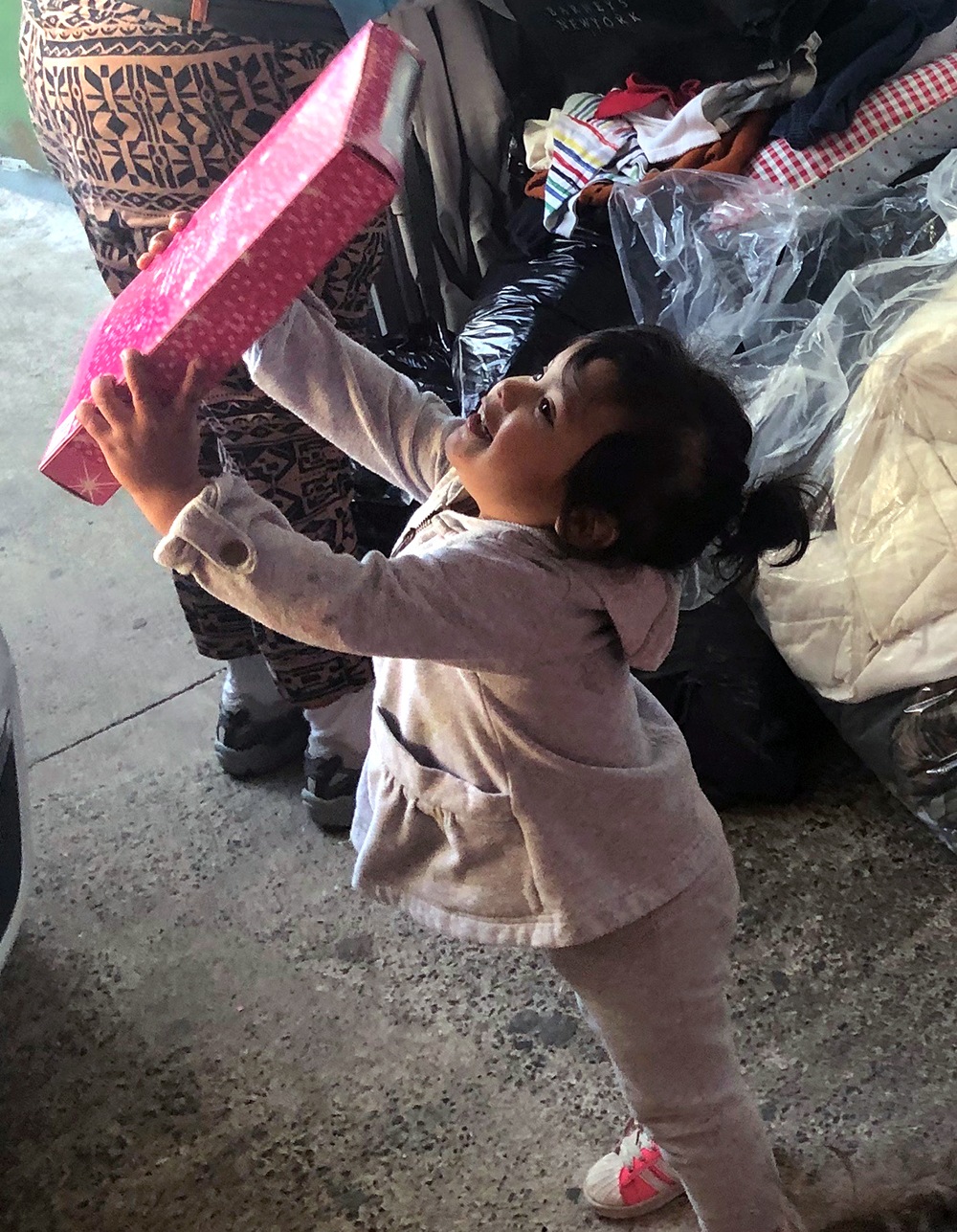 The next morning we were up at 7 to pack up for the next border cross; thinking that early would be easier.  But it was still a long wait, this time those begging or offering wares at our windows had stories of being from the US and the victims of ICE. No money, no way to get a job and families to feed. We arrived at the Uhaul parked at Denny’s, cleaned out our cars of anything personal and filled them to the brim with the last load, mostly toys for kids, coats, socks, medicines, toiletries and blankets.  There was a shout out early in the morning from San Diego Rapid Response they were in desperate need for clothes for the 159 coming out of ICE later in the day, so we left the clothes behind in truck. We arrived at Instituto Madre in a neighborhood on a hill.  We were greeted with excitement and open arms.  We learned that 40 families had just left for the ICE holding in SD, so there were only 80 families now, but the facility is meant for 40.  The women and children living there were in need of everything. But the toys were the biggest hit with the kids and the jackets with the mothers. It is cold at night and we could see that warmth was a huge need. We stayed for about an hour, learning stories, getting interviews and watching the kids play.

We had to get to the border in time to get the clothes in the truck to Our Lady of Guadalupe, the site ICE does the drop off at north of the border.  We moved our personal items and I drove the truck to Our Lady.  It was super organized. They were waiting for us, we had been in touch all day through the multitudes of Facebook, and WhatsApp threads used to share information about the border activities. Volunteers were there to unload and their thrill at the fact that we had new men’s shoes sent chills up my spine. I thought of the stories the Local Peace Economy members had shared about what they bought and why and how the thoughtfulness was experienced by those receiving. How it is a continuum. 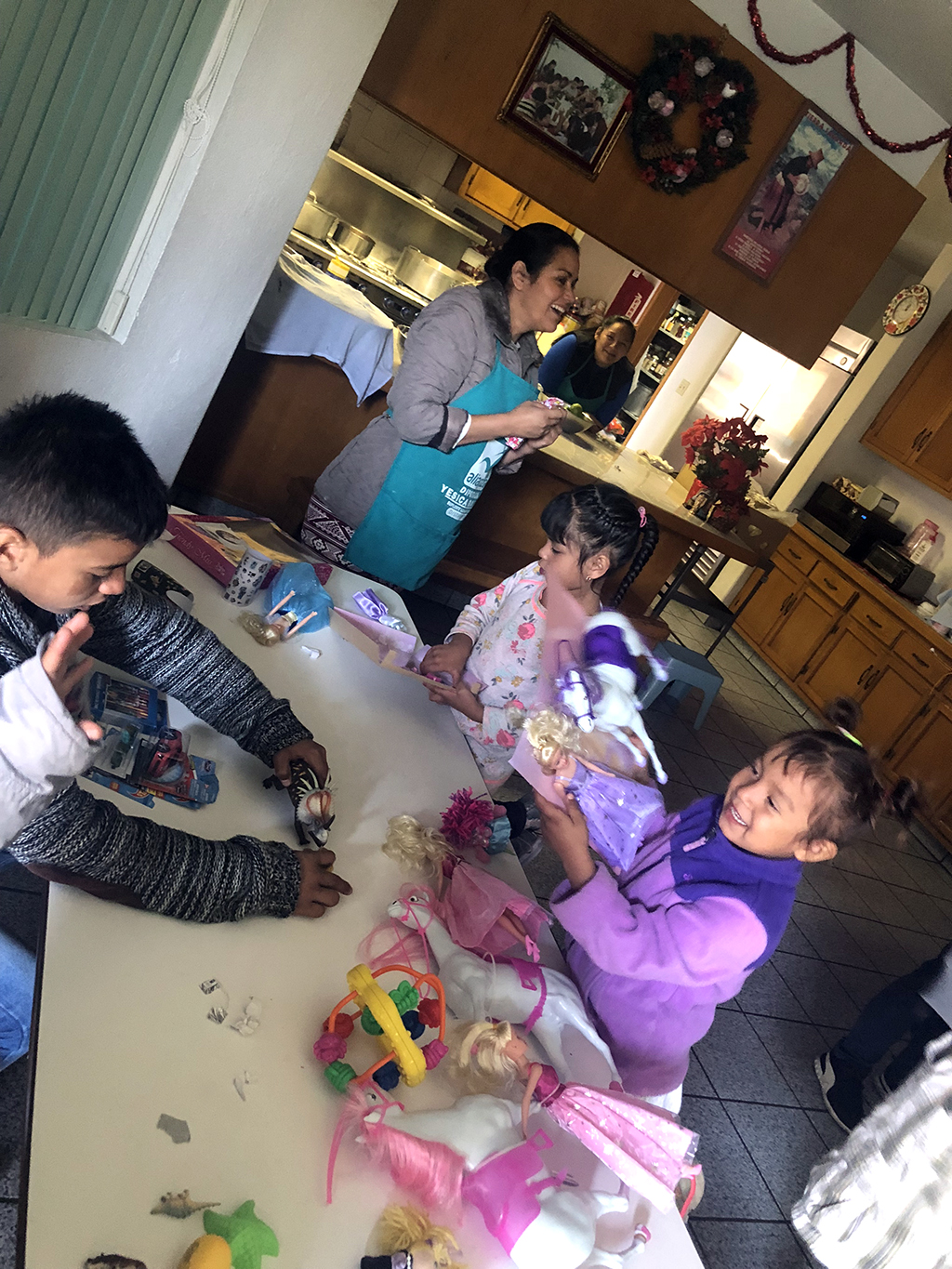 Finally, the truck was totally empty and all of it had made it into the hands of those who needed it. I thought about the practices of the peace economy; relational and not transactional and how we who did the delivery were between two commitments of relationship.  One those who we wanted to support directly and then those who had gone to the effort to collect what we asked for that filled the truck, who trusted us to deliver it as we had promised. All this in the month we were offering our 21 days of gifting peace and love. Midday Sunday we were trashed, but it as the commitment between both that kept us going with energy, laughter and enthusiasm. And it was the joy in those receiving that gave back to us the energy in the end.  The reminder we are all connected and when we give there is a ripple between giver and receiver and what remains is that power of connection and responsibility. Not as a burden but as a way of life that is so nourishing. We all felt it. Sore backs, bandaged fingers and all.

There are many stories we heard from those we met, they asked us not to share.  They all feel very vulnerable.  The hell of El Barretal and 5,000 living in mud and cold with no water and little else, to the horror stories of rape and murder, to the stories of the hell inside of the ICE holding facility where they are kept for 4-9 days without showers, or warmth and then released to Our Lady to the arms of so many volunteers, the first stop the clinic as most are sick and many with lice.  After Kelly’s first trip she asked what do we do for the heartache and PTSD after spending a few days there.  I broke down today and cried for about an hour, without stopping.  From the individual stories, the systems of oppression and the effects of the war economy and what kind of world do we live in that we treat other human beings this way — next to the amazing outpouring of generosity and support.

Today, Chomsky shared on Democracy Now! above how US foreign policy creates the asylum seekers. Which is the reason why we diverted some of our work to end wars to being an ally to those who are most affected by our war economy. Roya was telling her husband Steve about our days and he asked why not get the ocean liners to take them up to Canada? That is our next project.  Want to help? Email: [email protected].