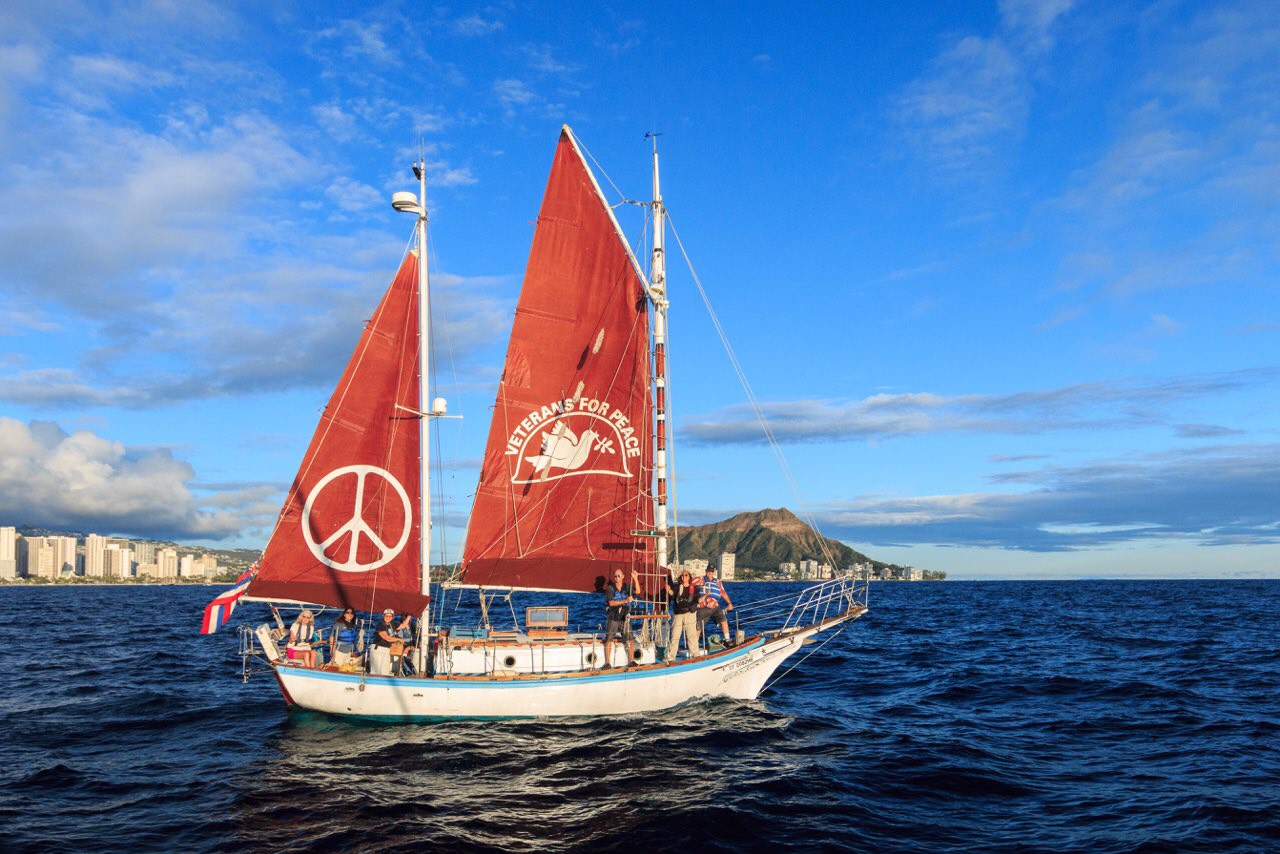 By Ann Wright and Helen Jaccard

Sixty-one years ago in 1958 the Golden Rule and her intrepid crew sailed from Los Angeles to stop U.S. atmospheric nuclear weapons from being exploded in the Marshall Islands.  Under orders from the U.S. government, the Coast Guard stopped the boat in Honolulu and arrested the captain and crew, who spent 60 days in jail.

Now, 61 years later in 2020, the Golden Rule, is back in Hawaii and is ready to sail to the Marshall Islands and beyond on her continuing mission to prevent a nuclear war.  With Veterans for Peace as her sponsor, the Golden Rule and crew are planning to leave Hawai’i in late-February and sail to the Marshall Islands and then on to Hiroshima, Japan for the 75th commemoration of the horrific U.S. atomic bombing of Hiroshima and Nagasaki in August 1945.

The six months that the Golden Rule has been in Hawaiian waters has been a terrific experience for all involved, and the educational mission has been very successful.  The Golden Rule has visited five islands, staying on the Big Island, Maui, Oahu and Kauai for one month each and on Lanai for one week.  Golden Rule spokespersons Helen Jaccard and Zoe Byrd have given over 50 presentations to Quaker gatherings, Buddhist temples and missions, Unitarian congregations, Rotary clubs, peace groups and students of all ages.

The Golden Rule has received fantastic press coverage in Hawaii!  From the beginning, in Hilo on the Big Island of Hawai’i, there were radio interviews and front-page articles and photos in the Hawaii Herald Tribune, and some on TV!  The Maui News covered the Golden Rule in four articles, including a front-page photo, and again there were a few radio interviews.  In Honolulu, the Golden Rule received major TV, radio and newspaper coverage, with the biggest Hawaii-wide media, the Hawaii Star Advertiser, the Hawaii News Now TV and Hawaii Public Radio.

Challenging Nuclear Madness and Militarism in the Pacific!

At all of its port stops, the Golden Rule and her crew tell people about the Treaty on the Prohibition of Nuclear Weapons (TPNW), which was passed by the United Nations General Assembly 122-1 on July 7, 2017.  As a result of the Golden Rule’s presence, Honolulu joined dozens of other cities in urging the U.S. government to ratify the TPNW.  The resolution of the Honolulu City and County also welcomed the Golden Rule to Hawaii and affirmed the Back from the Brink principles:

Golden Rule crew members have also been learning about how the Indigenous cultures and environment of the Hawaiian Islands – and many Pacific island nations – have suffered greatly from the presence of U.S. bases, war games and bomb testing. Marshall Islanders continue to suffer from high rates of cancer, the result of 67 U.S. nuclear bomb tests in their islands.  There are serious problems on Guam and Okinawa as well, and growing resistance.

To show our respect, the Golden Rule asks for permission from Indigenous leaders before arriving at any port.  Indigenous leaders often welcome us with moving words and ceremony.  Ann Wright, Helen Jaccard and Gerry Condon were honored to be received by the Elders at Mauna Kea, and to present them with the flag of Veterans For Peace.

One of the most meaningful events in Oahu was sailing with 9th graders on both the Golden Rule and the traditional Hawaiian sailing catamaran Kānehūnāmoku in Kane'ohe Bay.  Students from Halau Ku Mana Charter School are mostly Hawaiian natives in a school that emphasizes Native Hawaiian culture.  The Golden Rule really puts smiles on people’s faces!

The vision of the VFP Golden Rule Committee is to continue our Pacific voyage on to the Marshall Islands, the original destination of the Quaker crew in 1958.  To then sail on to Guam and Okinawa, two island nations that have been devastated by fighting in World War II and the dominating influence of U.S. military bases to this day.  And finally, to sail on to Japan, in time for the August 6-9 75th anniversary commemorations of the U.S. nuclear bombings of the civilian populations in Hiroshima and Nagasaki.

Please Help Us Complete this Historic Voyage for Peace

We are poised to make this history voyage.  We have a solid boat and a great captain, who have proven themselves in the 20-day voyage from San Diego to Hawaii.  We have a mission that is being well received wherever we go.  We have made contact with key people in the Marshall Islands, Guam, Okinawa and Japan, who are eagerly awaiting the arrival of the Golden Rule.  But we need your help too.

We need to raise $30,000 to cover expenses for the Golden Rule’s Pacific voyage.  These funds will cover our safety inspection haul-out in Hawaii, insurance, airfare for the captain and crew, captain’s pay, docks, fuel, food and other logistics.

If we don’t have at least $30,000 by March 1, we may not be able to continue.  We have been raising money as we go.  We have no corporate sponsors or deep-pocket angels.  We do have many dedicated supporters like you who have made mostly modest donations to help us continue this unique mission for peace.

The story of the Golden Rule, her sister ship the Phoenix of Hiroshima and the Japanese fishing boat The Lucky Dragon are well-known in Japan.  The Japanese people will be very happy to see the Golden Rule sail into Hiroshima and Nagasaki. This voyage is a remarkable opportunity for Veterans for Peace and other organizations and individuals to lift up our voices for peace and nuclear disarmament.

You can help the Golden Rule fulfill her destiny.  You can be a vital part of Golden Rule story. Please contribute today!