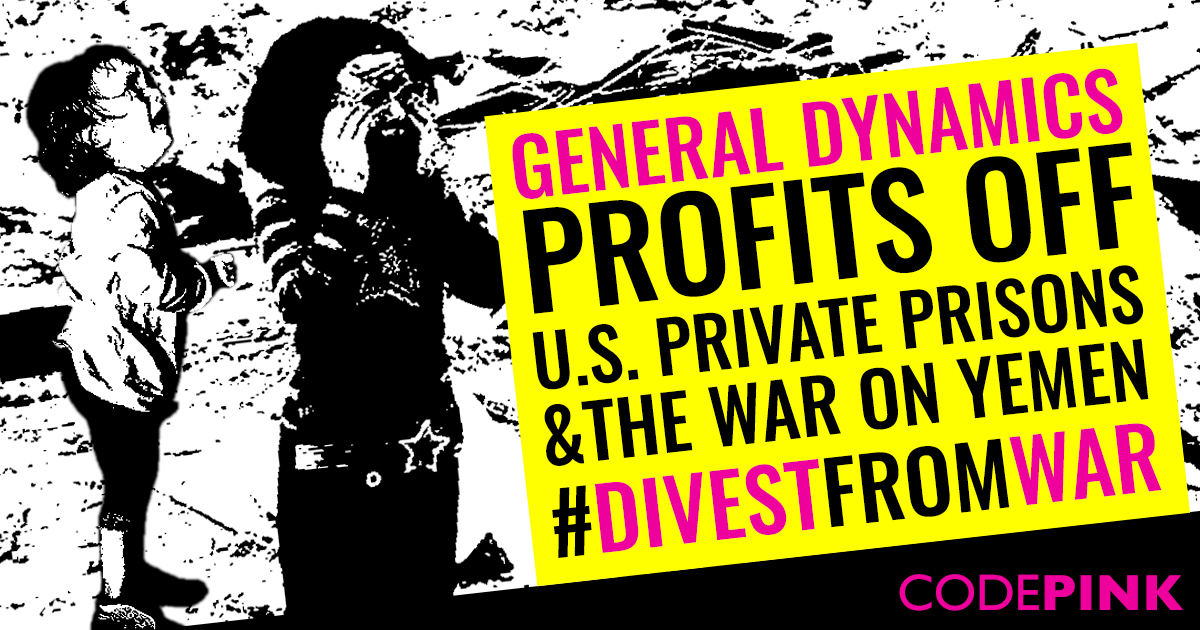 Tell your Congresspersons to stop taking campaign contributions from weapon manufacturer General Dynamics, an American based company and the sixth-largest weapons manufacturer in the world. General Dynamics sells weapons to Saudi Arabia, a despotic regime which is currently waging an unjust war against Yemen, without regard to how those weapons will be used. In addition to selling weapons to Saudi Arabia, General Dynamics has been implicated in war crimes and the loss of countless innocent lives around the world. This is a prime example of a company making money from human suffering by profiting off the migrant children held at U.S. detention camps and by perpetuating violence around the world.

General Dynamics is an American based company and the sixth largest weapons manufacturer in the world. In 2017 alone, the company earned $19.6 billion in arms sales, which is 63% of General Dynamics' total revenues of $31 billion. The weapons made by General Dynamics are sold to governments around the world: including Israel, the United States, Egypt, Canada, Iraq, and Saudi Arabia’s absolute monarchy.General Dynamics has a long-lasting contract with Saudi Arabia estimated at $1.3 billion dollars-providing weapons to a country which is waging a war on Yemen that has already killed an estimated six thousand innocent civilians. In 2017, the defense company also contracted with the U.S. Department of Defense for $13.7 billion in projects.

General Dynamics plays a major role in the war on Yemen by selling its weapons to Saudi Arabia without regard to how they will be used. The weapons made by General Dynamics are partly responsible for the innocent lives lost in Yemen. The company’s arms sales only contribute to the ongoing conflict and humanitarian crisis in the region, which creates strong resentment towards our country and contributes to the rise of violent extremism worldwide. The war in Yemen is led by Saudi Arabia, which is a major purchaser of General Dynamic weapons, including the deadly chemical white phosphorus.

General Dynamics has been implicated in war crimes and the loss of countless innocent lives around the world. General Dynamics has been implicated in the August 2018 attack on a Yemeni school bus where forty-four innocent children who were  returning from a field trip were killed and seventy-seven were wounded. The New York Times reports that one of its reporters was shown the remnants of a General Dynamics guided metal fin at the site of the bombing-a metal fin that is normally attached to a 500-pound bomb. The reports on the remnants were that it was found near the school bus bomb site with a unique manufacturer code identifying it as a General Dynamics  product. Human Rights Watch states the attack on a Yemeni school bus was an apparent war crime.

General Dynamics is a prime example of a company profiting from those who are suffering. The military contractor has taken a government contract to provide “social services” to migrant children held at U.S. detention camps. It contracts with the Department of Health and Human Services (HHS) to provide support and training at the for-profit prison companies operated by CoreCivic and GEO Group. HHS is a part of the network of agencies that handle immigration and refugee cases in the United States. For example, the Office of Refugee Resettlement (ORR) is a part of Health and Human Services and ORR is responsible for coordinating services for refugees. General Dynamics provides information technology systems and support for managing refugee case files- specifically information technology (IT), caseworker support, file review and redaction, and data entry. These services are used to track and manage case files when children and families are in the immigration system. General Dynamics holds several government contracts for information technology and support services for many government agencies including the Department of Homeland Security.