From the revolving doors of the Pentagon to the Biden administration 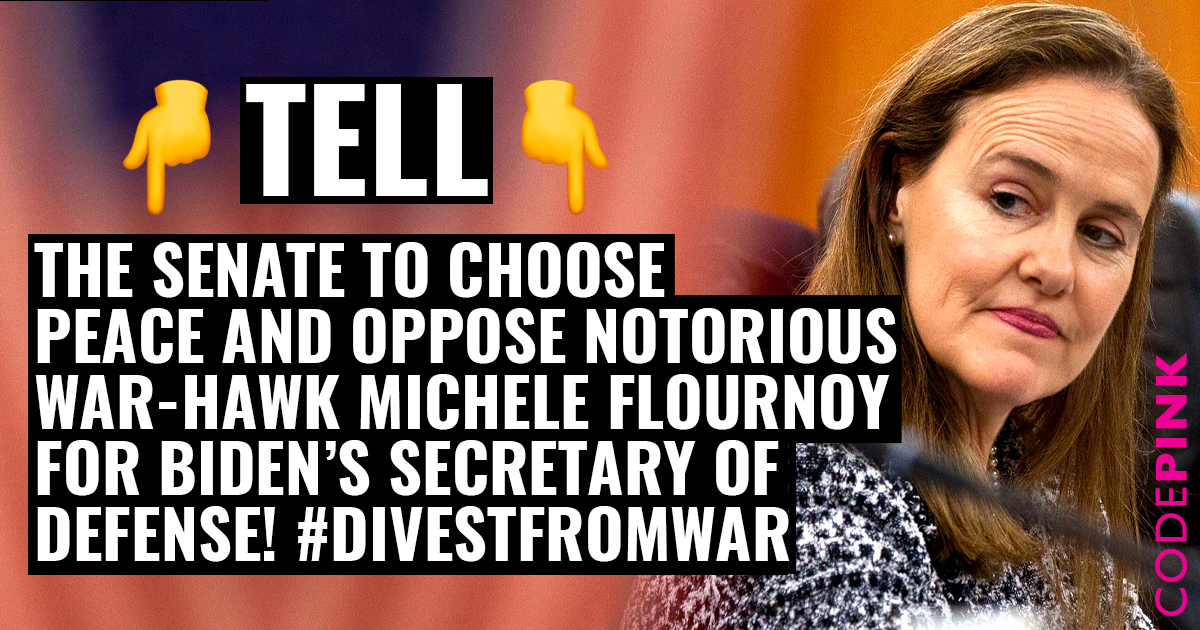 Do you want someone on the board of a company connected to the brutal Saudi war in Yemen to serve as the next Secretary of Defense?

President-elect Joe Biden is expected to select notorious war-hawk Michele Flournoy, who supported the wars in Iraq, Libya and Syria when she worked at the Pentagon and is on the board of military IT contractor Booz Allen Hamilton, as his candidate for Secretary of Defense. Contact your Senators right now and tell them: no weapons industry war-hawks in the President’s cabinet!

Flournoy's career has been marked by the unethical spinning of revolving doors between the Pentagon and consulting firms that help businesses procure Pentagon contracts. In 2018, she joined the board of Booz Allen Hamilton, an IT company that played an important role in Crown Prince Mohammed bin Salman’s 2015 drive to consolidate power. Booz Allen employs dozens of retired American military personnel to train the Saudi Navy and provide logistics for the Saudi Army. They deny helping the Saudi war in Yemen, and if you believe that...

This is urgent: President-elect Biden could officially select his choice for Secretary of Defense as early as Thanksgiving and we can’t let his foreign policy be dictated by a former Pentagon official who sits on the board of a company connected to MbS and the brutal war in Yemen. Since all cabinet members must be approved by the Senate, we are starting our petition to the Senate NOW to oppose the appointment of Flournoy or any candidate in bed with the military contractors. Contact your Senators now!

It’s true — we probably won’t like anyone appointed to Secretary of Defense. But we must firmly oppose the fundamental conflict of interest that occurs when the official selected to oversee the Defense Department is beholden to the same companies that stand to gain enormous profit under their tenure. We oppose Michele Flournoy and any candidate for Secretary of Defense with ties to revolving doors of the Pentagon because when the military contractors calls the shots, we get:

❌ The sale of even more weapons to Saudi Arabia and the UAE, further fueling those repressive regimes and their war on Yemen

❌ More money wasted on the Pentagon — despite the country being in dire need of resources to combat the pandemic, stop climate change, and guarantee universal healthcare

❌ An escalation of the US’s reckless cold war with China — which could turn into a hot war, endangering millions of people around the globe

With this new administration and new progressive voices in Congress — Cori Bush and Jamaal Bowman, for example — we have a real chance to prioritize peace over war. We already have efforts in the works to finally end U.S. support for the war on Yemen, slash the Pentagon budget, deescalate the growing conflict with China, and advocate for a New Good Neighbor Policy in Latin America. But these campaigns for peace, especially the work to end the war in Yemen, could be in serious trouble if Michele Flournoy, or anyone who shuffles between the revolving doors of the Pentagon and military contractors, is appointed to lead the Department of Defense. Tell Congress: Americans don’t want someone who has supported the war in Yemen running the U.S. military! Don’t support Michele Flournoy or any candidate with ties to military companies as Secretary of Defense!

We knew we’d have to hit the ground running with a Biden presidency, and it looks like our first urgent call to action is here. Contact your Senators now!