From Cairo to Madison: Hope and Solidarity are Alive

Here in Madison, Wisconsin, where protesters have occupied the State Capitol Building to stop the pending bill that would eliminate workers’ right to collective bargaining, echoes of Cairo are everywhere. Protesters here were elated by the photo of an Egyptian engineer named Muhammad Saladin Nusair holding a sign in Tahrir Square saying “Egypt Supports Wisconsin Workers—One World, One Pain.” The signs by protesters in Madison include “Welcome to Wiscairo”, “From Egypt to Wisconsin: We Rise Up”, and “Government Walker: Our Mubarak.” The banner I brought directly from Tahrir Square saying “Solidarity with Egyptian Workers” has been hanging from the balcony of the Capitol alongside solidarity messages from around the country. 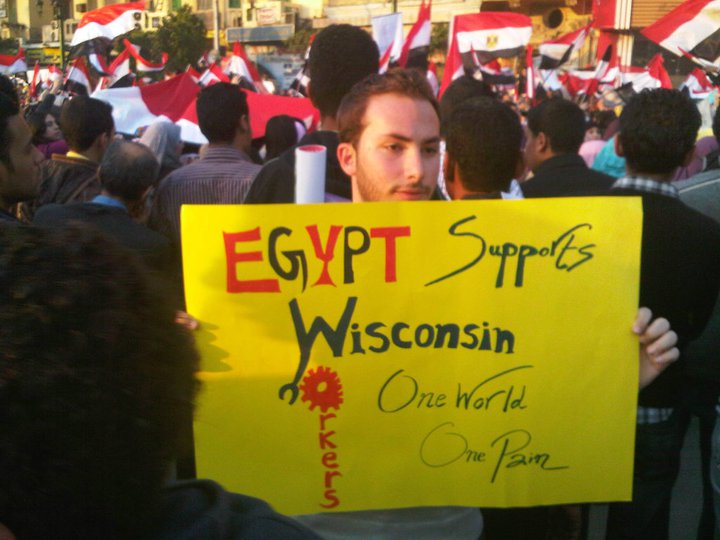 My travels from Cairo to Madison seem like one seamless web. After camping out with the students and workers in the Capitol Building, I gave an early morning seminar on what it was like to be an eyewitness to the Egyptian revolution, and the struggles that are taking place right now in places like Libya, Bahrain and Yemen. Folks told me all day how inspiring it was to hear about the uprisings in the Arab world.

Some took the lessons from Cairo literally. Looking around at the capitol building that was starting to show the wear and tear from housing thousands of protesters, I had mentioned that in Cairo the activists were constantly scrubbing the square, determined to show how much they loved the space they had liberated. A few hours later, in Madison’s rotunda, people were on their hands and knees scrubbing the marble floor. “We’re quick learners,” one of the high school students told me, smiling as she picked at the remains of oreo cookies sticking to the floor.

I heard echoes of Cairo in the Capitol hearing room where a nonstop line of people had gathered all week to give testimonies. The Democratic Assemblymembers have been giving folks a chance to voice their concerns about the governor’s pending bill. In this endless stream of heartfelt testimonies, people talk about the impact this bill will have on their own families—their take-home pay, their healthcare, their pensions. They talk about the governor manufacturing the budget crisis to break the unions. They talk about the history of workers’ struggles to earn living wages and have decent benefits. And time and again, I heard people say “I saw how the Egyptian people were able to rise up and overthrow a 30-year dictatorship, and that inspired me to rise up and fight this bill.”

Solidarity is, indeed, a beautiful thing. It is a way we show our oneness with all of humanity; it is a way to reaffirm our own humanity. CODEPINK sent flowers to the people in Tahrir Square—a gesture that was received with kisses, hugs and tears from the Egyptians. The campers in Madison erupted in cheer when they heard that an Egyptian had called the local pizza place, Ians Pizza, and placed a huge order to feed the protesters. “Pizza never tasted so good,” a Wisconsin fireman commented when he was told that the garlic pizza he was eating had come from supporters in Cairo.

Egyptian engineer Muhammad Saladin Nusair, the one whose photo supporting Wisconsin workers went viral, now has thousands of new American Facebook friends. He wrote in his blog that many of his new friends were surprised by his gesture of solidarity, but he was taught that “we live in ONE world and under the same sky.”

“If a human being doesn’t feel the pain of his fellow human beings, then everything we’ve created and established since the very beginning of existence is in great danger,” Muhammad wrote. “We shouldn’t let borders and differences separate us. We were made different to complete each other, to integrate and live together. One world, one pain, one humanity, one hope.”

From the trenches of Madison’s State Capitol Building, hope—and solidarity--are alive and well.