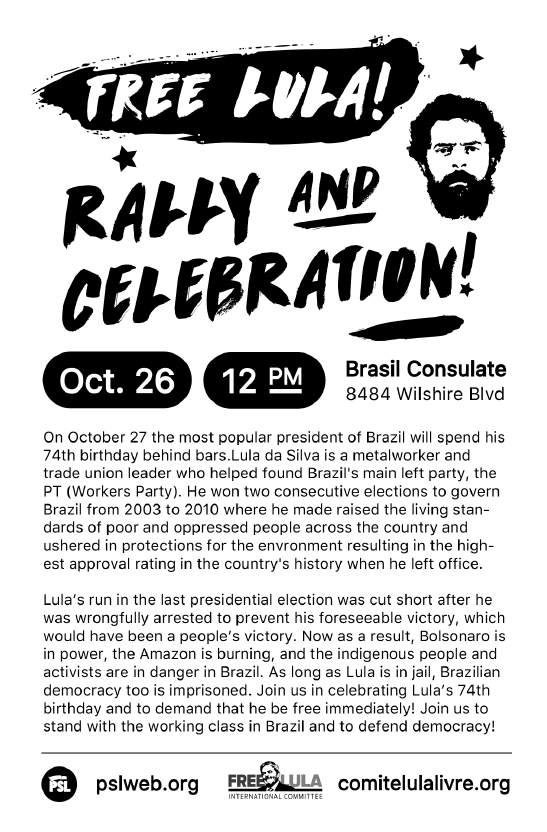 Join CODEPINK Los Angeles in celebrating Lula’s 74th birthday and to demand that he be free immediately and protest his illegal imprisonment. On October 27th, the most popular president of Brazil will spend his 74th birthday behind bars. Lula is a political prisoner, victim of a coup manufactured by the elites, the judiciary and the media in Brazil to prevent him to win the 2018 Presidential election.

An international campaign is taking place in more 62 cities. Join CODEPINK LA to take part of the movement for the immediate release Lula!

WHO IS LULA?
Luis Inácio “Lula” da Silva is a metalworker and trade union leader who helped found Brazil's main left party, the PT (Workers Party). He won two consecutive elections to govern Brazil from 2003 to 2010, where he made raise the living standards of poor and oppressed people across the country, lifting 40 millions out of poverty. He also ushered in protections for social and civil rights, and the environment, resulting in the highest approval rating in the country’s history at the close of his second term (86%). Lula’s run in the 2018 presidential election was cut short after he was wrongfully arrested to prevent his foreseeable victory, which would have been a people’s victory. He was leading in the polls in front of Jair Bolsonaro, prior to turning himself in. The most respected Brazilian and International jurists contest the legality and the arbitrary procedures that led to his conviction and imprisonment. Now, as a result, Bolsonaro is in power, the Amazon and the indigenous people and activists are in danger are the democracy is in risk in Brazil.

LULA IS INNOCENT
Lula was arrested on charges of corruption based on the testimony of criminals who were favored with reduced sentences (plea bargains). In none of the cases is there concrete evidence against him. And in addition, he is in prison even though the defense resources have not been exhausted (which is against Brazilian law).

The Intercept has been leaking in his Secret Brazil Archive conversations between the prosecutors and the judge Sergio Moro (who put Lula in jail, and is now Bolsonaro's Justice Minister), proving they were clearly collaborating to incriminate Lula, and showing their political motivations against the Workers Party. Lula's lawyers has always denounced he was a victim of Lawfare, a form of war consisting of the use of the legal system against an enemy, such as by damaging or de-legitimizing them with the help of main media.

A Free Lula campaign is not only a claim for just justice for an innocent man. It means freeing the dream and the hope of women, blacks, youth, LGBTQ+ people, native Brazilian, their defenders and human rights activists. As long as Lula is in jail, Brazilian democracy and progress too are imprisoned. Join us to demand Lula's immediate release. Stand in solidarity with the people of Brazil to defend democracy and human rights with our international brothers and sisters fighting for a brighter future in Latin America.