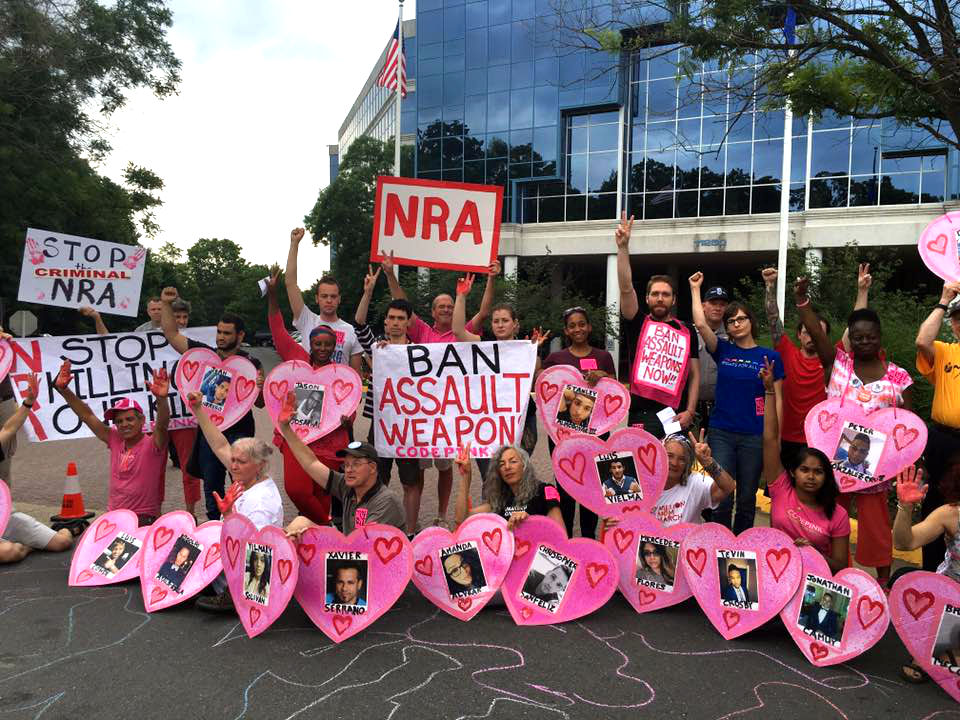 Last night more than 100 activists – led by CODEPINK – held an overnight vigil in front of the National Rifle Association (NRA) headquarters in Fairfax, Virginia, where 18 of us were arrested this morning for blocking the NRA entrance. We were there to memorialize the 49 victims of the senseless mass shooting in Orlando and to protest the roadblock the NRA has been to even the most moderate and widely supported gun control measures. Sadly but unsurprisingly, just hours before our vigil began, the U.S. Senate rejected every gun control measure before it, including universal background checks which are supported by more than 4 out of 5 gun owners.

Click here to contact your Senator and let them know how disappointed you are in the cowardice of the Senate and to demand an assault weapons ban now!

To be clear, the Senate wasn’t even considering the assault weapons ban we’re advocating for – a measure that is critically necessary to get weapons of war out of our communities – they were considering much weaker measures, such as universal background checks and banning gun sales those on the terror watch list. Thanks to the NRA’s stranglehold on Congress, not even these minor restrictions, supported by a vast majority of Americans, could pass.

With more than 30,000 gun deaths in the U.S. each and every year, the clear and present danger to our lives and the lives of those we love is the NRA. The outrageously powerful lobby firm has blocked gun control to the point where gun violence is now the leading cause of death for 15-24-year-olds.

It is time that we all rise up and demand action from Congress, NOW! Tell your Senator that you demand that they protect American lives and stand up to the NRA by passing an assault weapons ban now.

We are still in mourning for the victims of Orlando. We ask you to join us in working to make sure that a massacre of this proportion never happens in our country again.

P.S. The Supreme Court has spoken, as has President Obama. The reason it is still legal to buy and possess these weapons of mass destruction lies solely on Congress. Take action to demand that they pass an assault weapons ban TODAY!