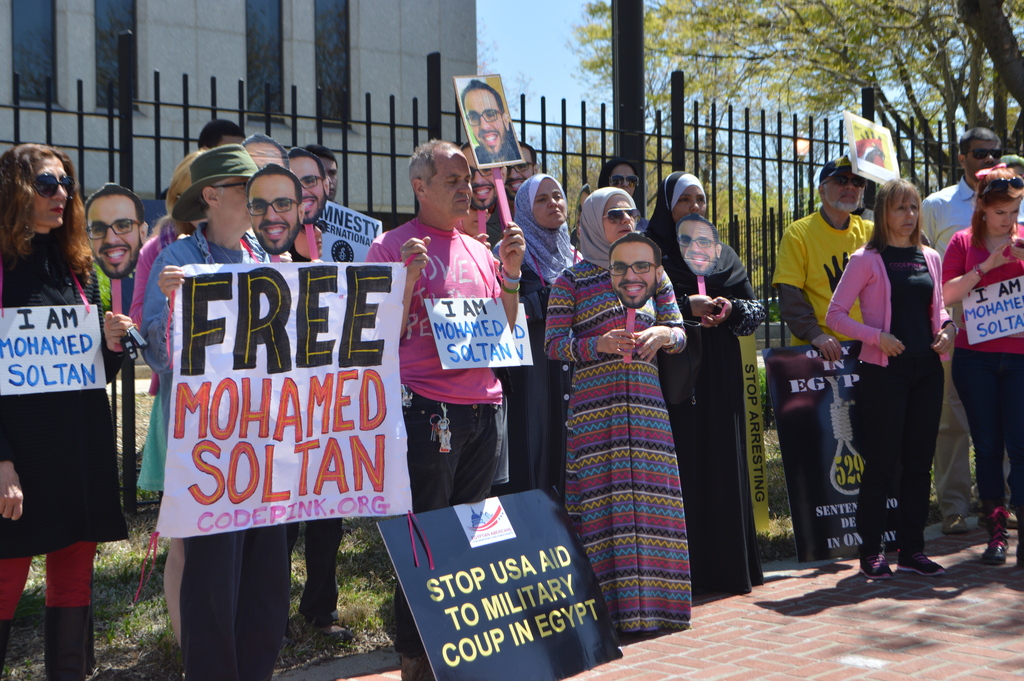 Since the ouster of President Mohammed Morsi in July 2013, human rights abuses in Egypt have been piling high. The new authority that came from protesting has now banned any political public expression. In the Raba’a Massacre last year, at least 800 supporters of the deposed president were killed by government forces, in what rights defender call the worst massacre in Egypt’s modern history. The police officers involved in breaking the Raba’a sit-in remain at large, and many still serving in their positions, while thousands of protesters and average citizens are serving severe sentences for expressing disdain.

Rights workers in Egypt report police arrested protesters and held hundreds, including children, in Central Security Forces camps where they reported being subjected to torture. Local rights groups say the number of detainees in the months following nears 80,000.

But the Egyptian government's attempt to silence and imprison activists were just beginning. Detainees report being subjected to solitary confinement, lack of proper medical care, inhumane and degrading treatment at the hands of officers and a bias judiciary system that serves power, not justice.

After handing Alaa Abdel Fattah a 15-year sentence, who stood outside the court not being allowed in to be present for his own court sentencing, the judge later excused himself from the case, due to the absurdity of the prosecution's evidence, which at some point included footage from music videos, a galloping horse and a homemade celebration tape of Alaa’s family.

Alaa is now back in prison and on a hunger strike.

Sana and Alaa are siblings, who lost their father, prominent human rights lawyer Ahmed Seif just weeks ago. Alaa entered a hunger strike on on August 19, while Sanaa followed him a few days later. Their family, mother and university professor Laila Sueif and sister and activists Mona Seif joined them in the strike.

"We do this because it's important to show solidarity," Sueif said in a tired voice over the phone from Cairo earlier this month. "This is our family and we won't back down."

Meanwhile news about the deteriorating health of Egyptian-American journalist Mohamed Soltan, 26, has captured attention. The Ohio State University graduate has been on a hunger strike for over 285 days since his detention and is now slipping into a coma, according to local reports.

On Wednesday, a judge refused an appeal from 12 rights groups for an immediate release of Soltan based on his medical condition.  Soltan is one of dozens of journalists currently jailed in Egypt for reporting on the opposition. Being on the front lines and doing one’s job is now a crime in the new Egypt. The list of charges against them included inciting violence against the government and defamation against the country.

Soltan’s alma mater, The Ohio State University, has been holding vigils and solidarity events in his name, calling on President Barack Obama to intervene on Soltan’s behalf. While the White House has largely remained silent during the 14 months Soltan has been held, the US finally in October spoke out for their imprisoned national.

According to local Egyptian newspaper reports, the US Embassy in Cairo has issued a letter calling for Soltan’s release. But nothing more. Obama, despite speaking out for imprisoned Americans in North Korea, has said nothing on Soltan’s case, likely not wanting to interrupt amicable relations with the new dictator in Cairo, President Abdel Fattah al-Sisi, despite the overhauling of crackdowns on people of conscience that appears to be a return to the dictatorial ways of Hosni Mubarak, who Egyptians forced from power, only for him to be replaced by an oppressive military power, desperate to not let it control slip out of its hands again.

One of those who went into a solidarity strike was Nermeen Yousri, an Egyptian cancer researcher and political activist. Many of her friends are in prison. She joined the strike last months and had to break it later due to medical reasons, and spoke about her reasons for joining the strike:

"I simply decided to go on hunger strike, when everything else we did to support the detainees, simply ended up with more people behind bars.. Literally everything.. Marches, silent stands, putting up posters, even wearing t-shirts with a picture of someone who's in prison, could send you too to prison.. And unlike what many people think, you're not really safe if you lay low and keep silent," Nermeen like tens others who joined the strike, highlights the importance of solidarity.

"Also, one very important reason of my strike, is solidarity with striking detainees.. They're in prison, subjected to all forms of pressure to end their strikes.. And threatened with solitary confinement and other forms of torture.. So the least we can do is to let them know they're not alone in this.. If I was in prison, I know it'd mean a lot to me if people were striking with me."

Egypt also had to defend it human rights record in front of the UN following the country’s Universal Periodic Review (UPR) examination earlier this month.

Amnesty called the Egyptian defense "cynical" and that the Egypt they tried to present  "was unrecognizable,”

“At best, they are completely disconnected from the scale of the human rights crisis engulfing the country. It was a pathetic attempt at a cover up.”  Said Hassiba Hadj Sahraoui, Amnesty Deputy Director for the Middle East and North Africa Program.

In the midst of the increasing crack on public and political freedoms in Egypt, the group of individuals who choose this hard fight, are not showing any signs of backing down, and they deserve our solidarity and respect.