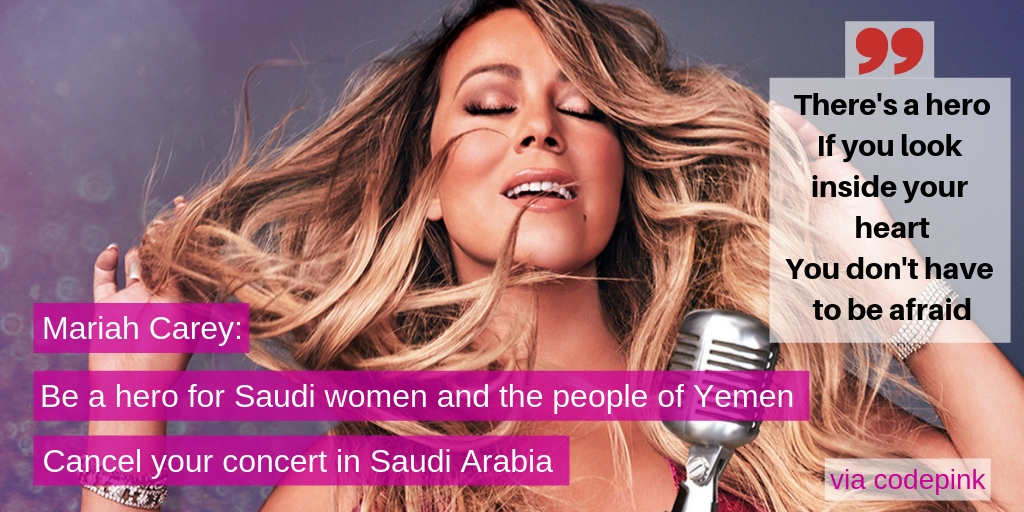 Sign our petition telling Mariah Carey and the others planning to perform at the Saudi international golf tournament in King Abdullah Economic City--Dutch DJ Tiesto, Yemeni-Emirati singer Balqees Fathi and Jamaican rapper Sean Paul--to cancel their performances and call for the an end to the brutal Saudi war on Yemen and imprisonment of Saudi women activists.

Since 2015 Saudi Arabia has been waging a war on Yemen so brutal that the country is now experiencing the worst humanitarian crisis on earth. Already, as many as 85,000 children under the age of five have died of hunger. Saudi Crown Prince Mohammed bin Salman has not been held accountable for barbaric murder of Washington Post journalist Jamal Khashoggi, and women activists are being imprisoned and tortured for speaking out for their rights.

Though women in Saudi Arabia have recently gained the right to drive, the kingdom has since arrested, imprisoned, and tortured a number of the brave women who campaigned women to drive. And under the oppressive male guardianship system, women in Saudi Arabia need permission from a male to travel, study, obtain a passport, marry, and engage in other life events.

Recently Saudi teenager Rahaf Mohammed al-Qunun fled after being physically and mentally abused by her family and threatened with death for renouncing Islam. Rahaf has been granted asylum in Canada, but millions of women in Saudi Arabia are still suffering.

If you perform at the Saudi international golf tournament in King Abdullah Economic City, you will be helping Saudi Arabia artwash their war crimes and repression of women, journalists, and anyone speaking out.

Please cancel your January 31 performances and speak out for an end to the Saudi war on Yemen and for the release of imprisoned Saudi women activists.