Does the NRA buy off your rep? 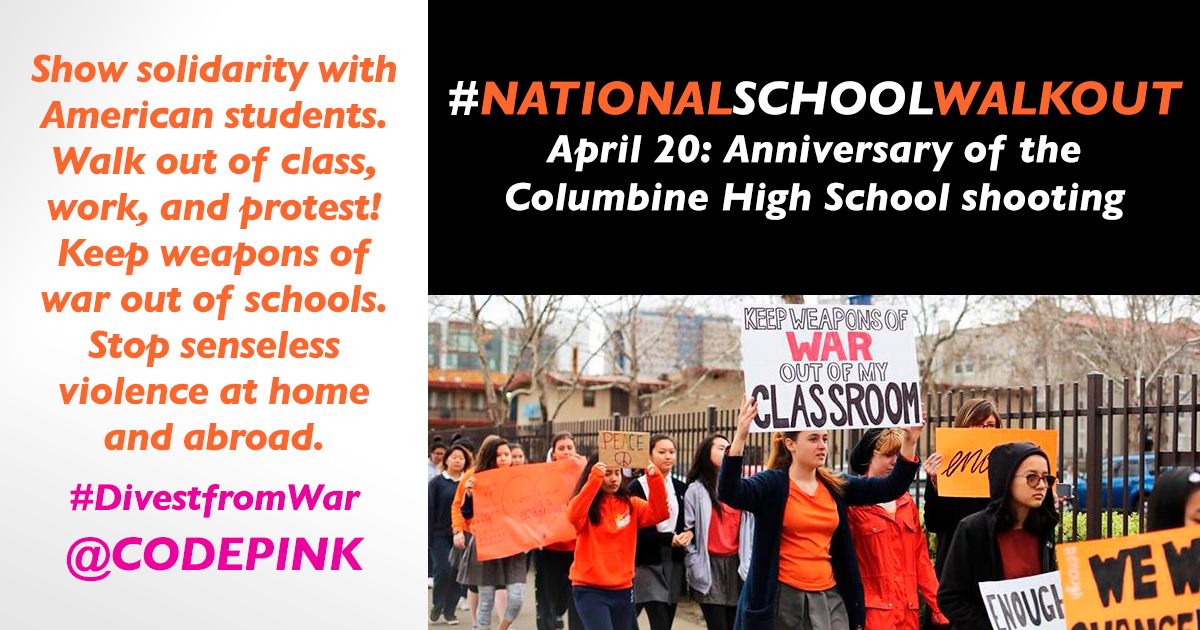 Nineteen years ago, two students at Columbine High School planned and carried out a massacre of 12 students. Eleven years ago, 32 people were massacred and 17 more wounded on the VA Tech campus with semi-automatic weapons.

Unfortunately, the violence has not stopped. From the shooting at Marjory Stoneman Douglas High School in Florida to last Friday’s strike on Syria, mass shootings and military attacks have become a routine, almost expected, part of American life.

It’s time for Congress to take action! Congress needs to protect children, not guns and weapons. One way to show us that they put our interests before those of weapons dealers is to stop accepting their money.  Tell your Congressional representative: Don’t take money from the NRA and weapons manufacturers.

While we are outraged at continued school violence, the tides are turning against those who profit from violence and killing. The March for Our Lives demonstrated that young people and their allies are not willing to accept this state of affairs as normal.  Tomorrow, our students are taking to the streets again, engaging in a National School Walkout, continuing to demand change.

And change is happening. The student movement is making investment in gun manufacturers bad business, and banks and investment firms are responding. Bank of America and Citigroup are among those companies that have stopped making loans to and investments in companies that make or sell military-grade firearms for civilians.

These are important victories. Consumer voices — citizen voices — are powerful, and the momentum following the tragedy in Parkland has demonstrated the power of collective action. Now it is time for Congress to pick up the torch. Tell your Congressional representative to stop taking money from the NRA and weapons manufacturers.

School massacres cause gun purchases to soar. Wars overseas, including the strikes in Syria, cause stocks in Lockheed Martin and Raytheon to rise. Lockheed Martin, Raytheon, and their investors are lining their pockets with profits derived from the devastation falling upon places like Palestine, Yemen, Syria, Iraq, and Afghanistan. But as we have seen from the movement to make our schools safe, we can turn the tide on these merchants of death.

It’s time to divest from war. We need to stand up against violence — in our schools, in our streets, in Congress, and in our own lives.