Do you call Congress more than you call your mom? 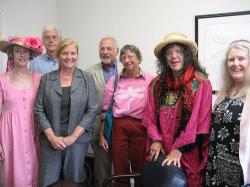 Sometimes we activists ask ourselves: how many times do we need to contact our elected representatives to let them know how we feel about out of control spending on the military?  When we call their offices, are they even listening? The staffers who answer their office phones are polite and assure us they will pass along the message. We can often develop a relationship with policy aides if we work at it. But are we really getting through?

This week a coalition of peace and justice workers teamed up to send a targeted message on the eve of the FY 2012 Defense Authorization vote. More than one hundred organizations, both national and grassroots, from all over the country, signed a letter to the Congressional Progressive Caucus (CPC) urging support for Rep. Barbara Lee's amendment to restrict spending on Afghanistan to getting out now in an orderly fashion, and demanding a NO vote on the $648.7 billion defense bill, including $118 billion to continue the wars.

The letter, which can be read online, called on the CPC to lead the way out of the wilderness of economic distress by bringing the war dollars home and reinvesting them in jobs, schools, and other real human needs. It pointed out that the U.S. Conference of Mayors overwhelmingly passed their own war dollars home resolution last month in Baltimore.

Rep. Lee referenced the historic resolution – the first time the mayors had addressed war spending since the height of the Vietnam War in 1971 – in her remarks on the floor of the House prior to the vote. CODEPINK played a leading role in drafting the resolution, and gathering mayoral support for its passage – so we were very excited to hear Rep. Lee mention it in the Congressional debate!

CODEPINK helped draft the CPC letter and the press advisory announcing it, and of course gathered many of the signatures. And we committed in the letter to support Progressive Caucus members of Congress who stick their necks out to speak against war funding demanded by the Obama Administration.

We know our representatives are pressured by their party leadership to toe the line and vote yes on legislation that continues to pour tax dollars into the coffers of weapon systems manufacturers. Reps who listen to their constituents rather than their own party face the threat of losing campaign funding for re-election.

How better to support your rep than by letting her or him know you're paying attention and you support them when they do the right thing, and vote to bring our war dollars home? 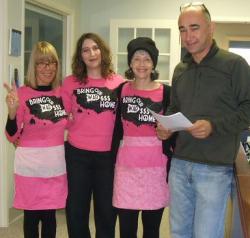 One sign that you're getting through: a return call like the one I had last week from Willy Ritch, Policy Advisor & Communications Director for Rep. Chellie Pingree. Willy wanted to send me links to media coverage of the Congresswoman from Maine speaking out about the need to bring the troops and the money home from Afghanistan. Her message made the front page of the Portland Press Herald, and re-reading it made me realize that I hadn't called her office today.