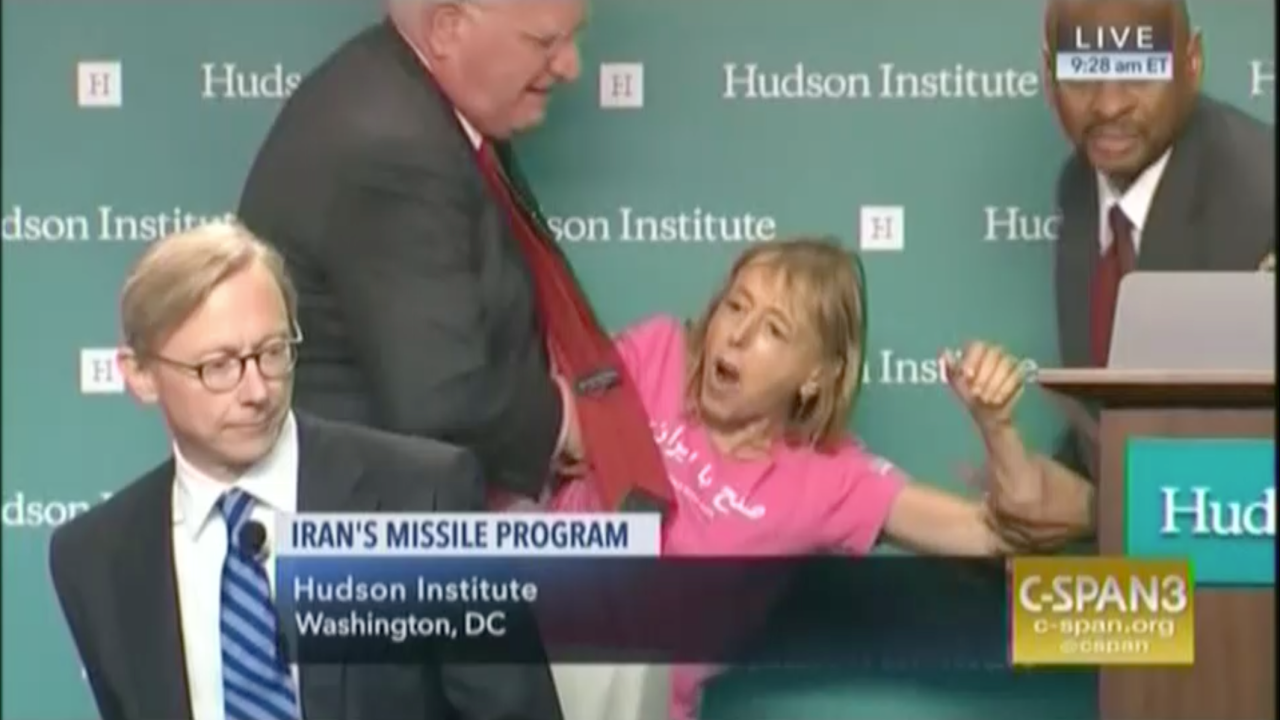 Her protest against Hook’s belligerent speech and the administration’s harsh sanctions struck a chord with people in Iran--CODEPINK has been bombarded via email and Instagram with messages from ordinary Iranians expressing their thanks and echoing the call for peace. “The messages from Iranians keep pouring in and are so beautiful,” said Benjamin. “People in both countries want to live in peace. We have to stop the Trump administration from dragging us into another unjustified, unwinnable, catastrophic conflict.”

Hook’s hawkish claims are similar to those made 17 years ago for Iraq. He drummed up anti-Iran sentiment by claiming that Iran was responsible for the deaths of American lives in Iraq and was the number one cause of terrorism in the region, refusing to mention the role of US ally Saudi Arabia in spreading Wahhabism and bombing Yemeni civilians, including schoolchildren.

Shortly after Hook’s speech, Benjamin stormed to the stage to counter Hook’s dangerous, misleading and false claims. While juggling between five different security guards, Benjamin called out Hook for paving a way for another war in the Middle East, given the catastrophic US military interventions in Iraq and Libya. She also asked if the sanctions were hurting the Iranian regime or the Iranian people. Hook refused to respond to Benjamin’s serious questions and concerns, instead joking “I think she had her coffee this morning.” The Hudson Institute went further, scrubbing Benjamin’s intervention from their livestream, as if it never happened. “It’s interesting how the Trump administration and ‘think tanks’ like the Hudson Institute are delighted by protests in Iran, but repress and try to erase any trace of protest against their warlike policies,” said Benjamin.

However, their attempts to silence Benjamin were unsuccessful as the protest has garnered much media attention among Iranians, including a tweet by Iran’s Foreign Minister, Javad Zarif.