Dispatch From the US/México Border: The Pizza Party at Contra Viento Y Marea 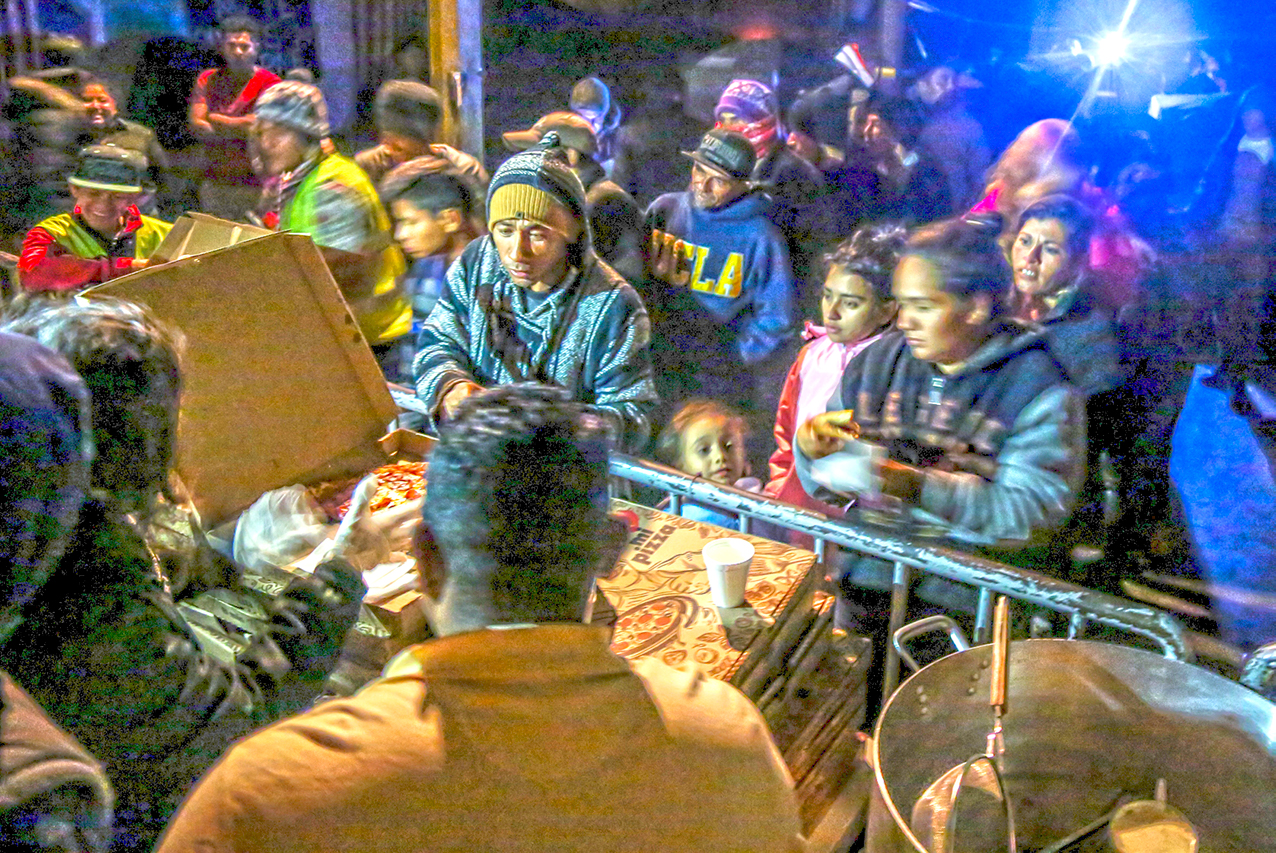 It took more time than I ever thought it would, but by around 7:45 PM we are able to bring the 70 pizzas from the beachside pizzeria to the warehouse. When we finish serving the long lines of women, children and men, many of whom told us they were preparing to go to sleep hungry, a man’s voice booms through a bullhorn and flashing police lights flicker in through the roll-up door, illuminating the mostly dark space.

A tiny patch of electricity generates enough energy to power a few spotlights here and there. But if too many people charge their phones or God forbid someone plugs in a coffee pot... KABOOM — COMPLETE DARKNESS. 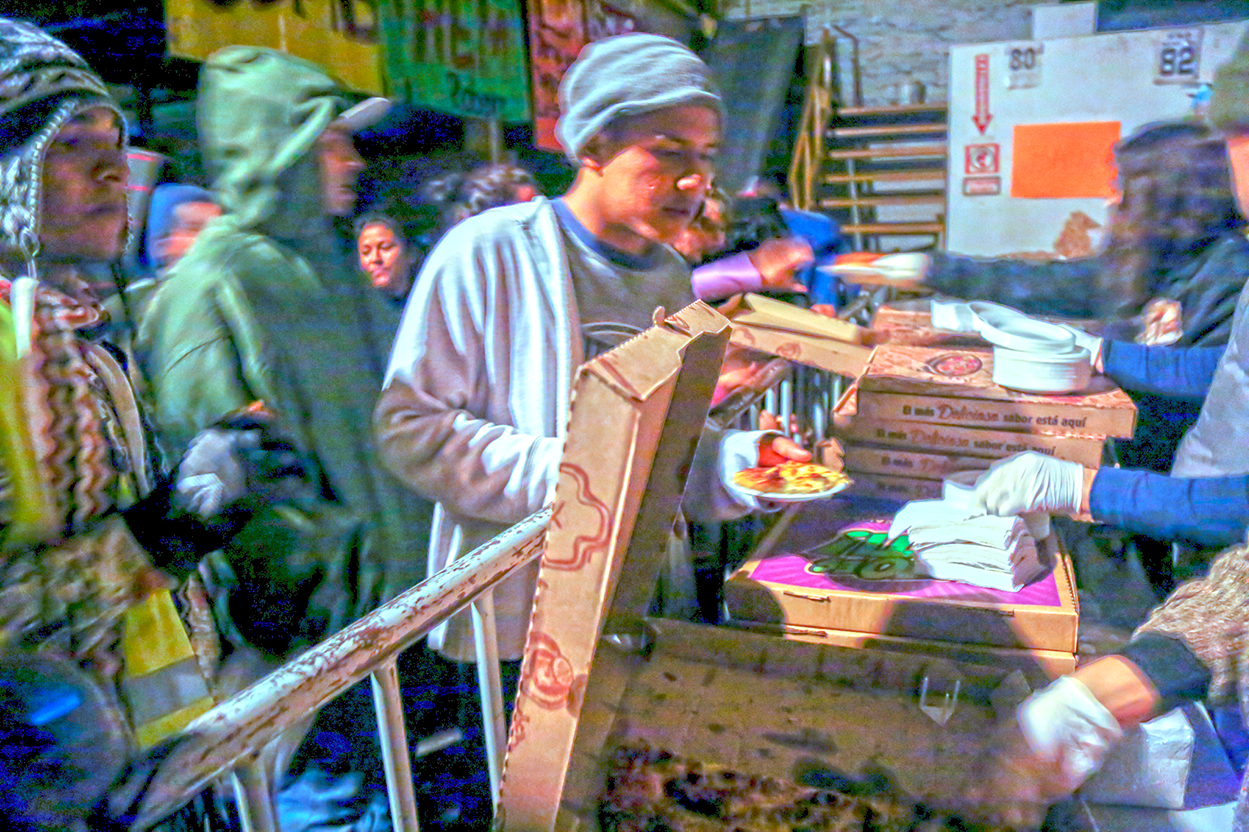 Right now, with the flashing lights creating gargantuan shadows on the high ceilings and folks milling about aimlessly, the moment has that sad feeling of being at a giant RAVE where the Police have shown up before the DJ. With the local law enforcement assembling outside and a rumor circulating that tonight the feds will make their move, raid the place and tear gas it...again...and try to forcibly evict and transport them to Beritol, the sad feeling is twisting into an eerie one.

As I see militia roll by on tanks outside, with automatic rifles mounted on top, soldiers donning full camouflage, helmets n’ all, I get the feeling I often have here in Mexico, that I’ve entered another world.

It’s in this moment that my good friend, my host at The Playas, texts: “How is everything?” The words, on my screen, at that moment snap me back into focus like clockwork.

I’ve done what I set out to do. I picked up the wire, got the cash, ordered the pizzas, met up with the crew of Hecate Society. Together we scooped the pizzas, brought them and served them to very grateful Caravaners at the warehouse at Benito Juarez.

Now, after the group of 200 + has had at least two servings and the resourceful, thoughtful leaders have stashed some for breakfast “there is no promise of food in the morning. Those stashed pizzas may be it,” my friend from Hecate Society tells me —I’m out. 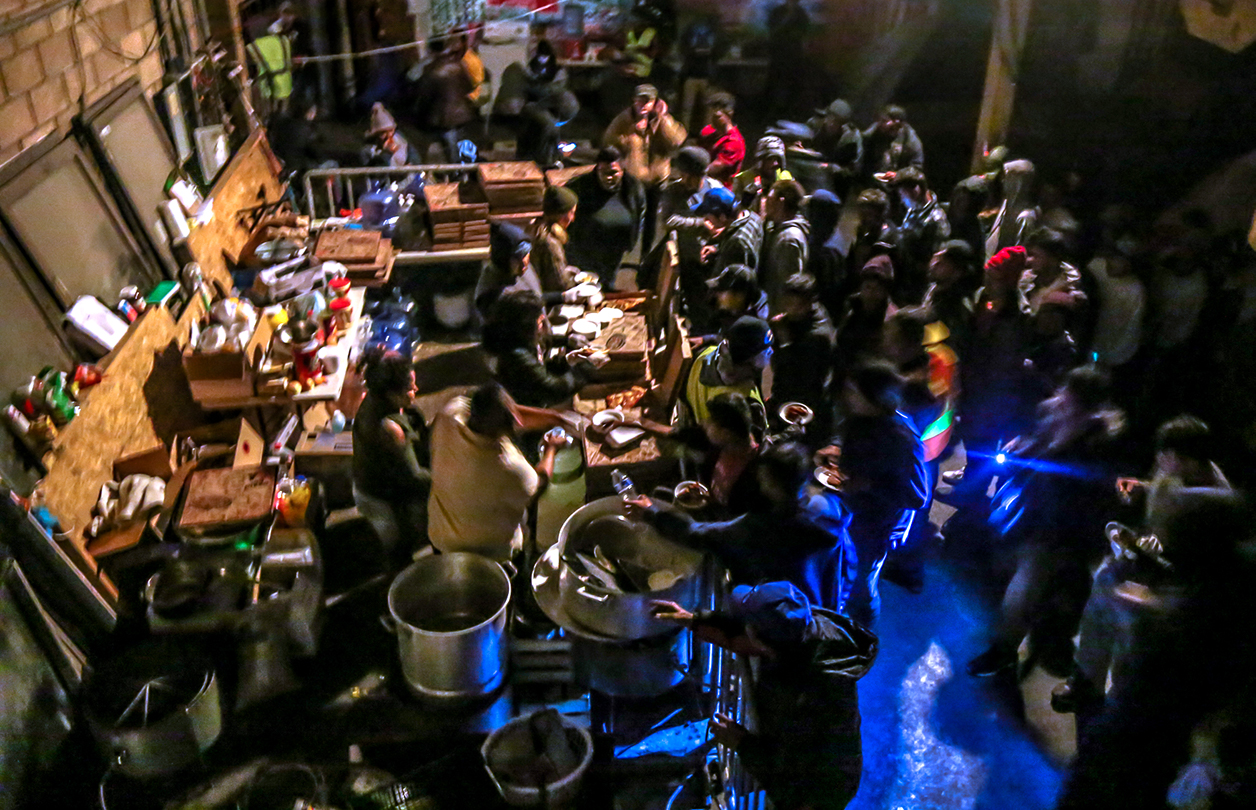 There is no time to celebrate this small and important community victory because another emergency is unfolding before our eyes.

Now, as heavily armed federal police in riot gear take their positions outside the warehouse and turn their vehicles and beam their headlights towards the entrance, perhaps to intimidate, perhaps to prepare, I’m not sure which, I pull out my phone, find my Uber app and stand in the headlights, the only available light, waiting for my ride back to the Playas.

As I pass the police vehicle and get into the car, I look one last time back at the group inside...the children, their moms, grandmoms, granddads...the young men willing to lay down their lives to protect... the artist-organizers, from Hecate Society, who are standing in firm and solid allyship... I realize in my heart that this is all about Freedom... and the passion that burns in the hearts and Souls of these couple hundred folks, to fight for it... with their lives.

This morning, around 9 am, I was given a tour of the warehouse at Benito Juarez.

Hecate Society and I were greeted by an Elder Brother, bearded, easy going and kind. He jokes that when he saw us, he thought we were there to “take him to the other side.” 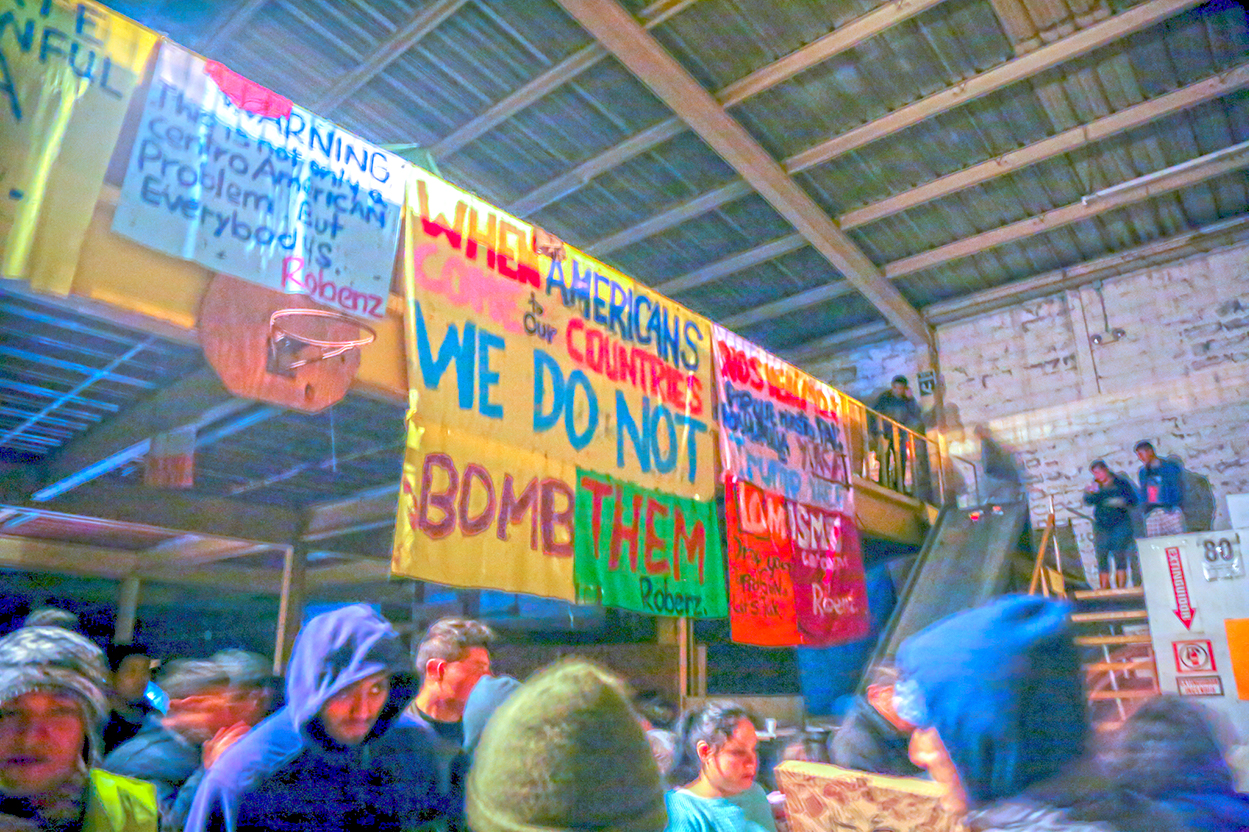 The “other side,” is the United States.

He is the spokesperson and guiding force at Contra Viento Y Marea or Against Wind and Tide.

Unfurled at The entrance of Contra Viento Y Marea are giant, painted fabrics with proclamations, prayers of freedom, solidarity, health and community wrapped like a protective skin around the cold, clean vast space that is lined neatly with tents.

The tents of varying shape and size, dimension are the private dwellings of the folks who live here temporarily, while they struggle to maintain their humanity and gain a foothold in what is turning out to be a long, complex, arduous journey to safety and freedom as they apply for asylum in the US.

As I stand and take in the immensity, a twenty-something freckled face kid comes over and introduces himself as Herman. His eyes are calm, tender and twinkling. He offers to tell us anything we need to know about the warehouse, where he is part of the 24-7 security detail. 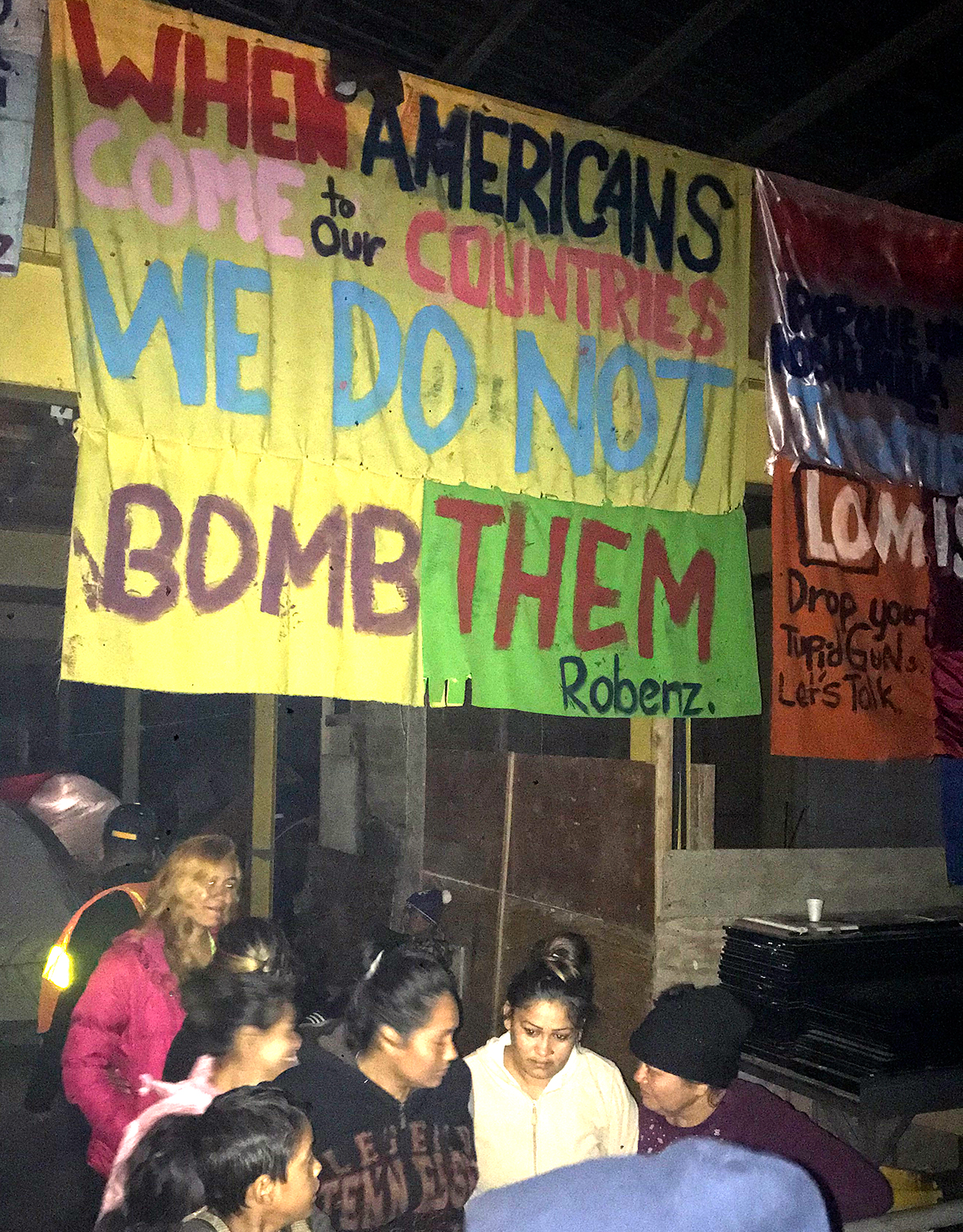 He is proud that this is a safe space for women, girls and other vulnerable groups.

As he shares this I see a young woman sweeping the floor with a giant, industrial push broom. She is quiet, focused and diligent as her daughter traipses around her feet, dancing and playing. There are similar scenes of morning rituals; folding clothes, feeding children, tidying...some folks are in line for steaming hot morning coffee where behind metal dividers folks are aproned up, serving breakfast.

The organization and intentionality of the assembly stands in contrast to the usual images splashed across newspapers and phone screens chronicling the mayhem and discordant pieces of the day to day life of The Caravan. The folks at the warehouse seem to be more of an indigenous collective than a hodgepodge of desperate refugees scraping by on a wing and a prayer. When I ask Hecate about this they tell me that decisions are made collectively, through vote and group decisions. Duties and positions are clearly outlined and community is respected by the close-knit group of folks that is learning quickly that they must be organized and ready at a moments notice to respond to emergencies.

On December 29th the emergency was 300 plus federales in riot gear and 6 busses assembled outside the warehouse with the imminent plan of herding Nay, Herman and everyone in Contra Viento Y Marea to Beritol.

Beritol is the open-air stadium on the outskirts of town where the majority of folks from the Caravan have been deposited by force, compliments of the federal government which seems intent on sweeping the Caravan out of public view and behind God’s back...where anything can and does happen.

Hecate describes Beritol as a “make-shift refugee camp. It is unsafe, unsanitary, and dangerous for the vulnerable.”

According to eyewitnesses, when good Samaritans drop off donations such as food, blankets, tents, water, clothes and other items, the federal and local militia surrounding the stadium place the donations in a storage lock up and do not distribute them to the thousands in the stadium who are hungry, cold and sleeping out in the open air.

On December 29th, the night the police come to take Contra Viento Y Morea to Beritol, the leaders organized a quick voice vote “stay and risk whatever comes our way or leave?”

The people voted to stay.

So they locked down and chained themselves to the inside of the warehouse and negotiated, reminding the police that the women and children involved deserved not to be harmed. Even though they’d been tear gassed in the process, Nay and the other leaders organized a deal to remain at the warehouse.

Though the police have agreed to let them alone until the 24th of January, this morning there is a heavy police presence and according to our hosts, collective members are anxious all the time and sleep with one eye open.

Herman, the young freckled faced cat with the twinkling eyes tells us that the constant stress is overwhelming. He thinks a good idea is having recreational games like cards, bingo, people to teach English, do herbal remedy workshops and teach healthy ways of de-stressing for them, since mostly they leave for whatever little work they can get, or they’re shut in, waiting, worrying what will happen next,

The stress and the lack of support and helpful media attention is upsetting to my friends at Hecate Society, who say the media either ignore what is happening or prefer the gelatinous portrayal of the damaged, dirty, sick and desperate migrant.

That attitude is reflected in the frustration of a young woman who scoffs at us as we walk around talking to people.

“Journalists come and write what they want, everybody’s sick, it’s filthy, they’re struggling. We’re doing good, we use the donations, we’re clean people, sure people are coughing, but we’re fine. We’re doing the best we can with what we have.”

My friends from Hecate agree.”The folks at Contra Viento Y Marea are intelligent, brilliant, capable people who just need help. I am not here, we are not here to do charity, we’re here to do mutual aid.”

The resilience of Contra Viento Y Marea, their powerful ability to remain organized and not turn in on themselves and their best interests is a good thing but also challenging when seeking support from volunteers and journalists who are working from the charity model described by Hecate.

Nay, Elder Brother, tells us that he is no longer interested in going to the other side. He would like to stay here and grow Contra Viento Y Marea and continue it as a safe space for women, children, LGBTQ, men and whoever needs to be safely housed when they land from Honduras, on their path to freedom.

Currently, there is another Caravan exodus planned for January 15th, 2019.

Please click this link to read more about Local Peace Economy at The US/Mexico border and what you can do for Peace.