Diane Wilson, a fourth generation shrimper from the Gulf, poured oil on herself at today’s Senate Energy Committee hearing in protest to the committee’s co-chair  blocking the Big Oil Bailout Prevention Act. The co-chair, Republican Lisa Murkowski, blocked the bill that would have lifted the oil companies' liability cap. Wilson was removed from the hearing and arrested. Read the post-action press release here.

Here is her statement to Senator Murkowski: 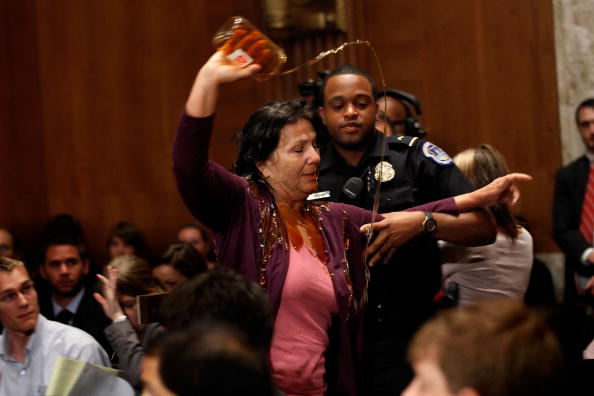 My name is Diane Wilson. I am a fourth generation shrimper from the Gulf. With this BP disaster, I am seeing the destruction of my community and I am outraged. I am also seeing elected representatives like Senator Lisa Murkowski blocking BP from being legally responsible to pay for this catastrophe. She stopped the Big Oil Bailout Prevention Act and wants to keep the liability cap at a pitiful $75 million. This is outrageous. How dare she side with big oil over the American people who have been so devastated by this manmade disaster.

Senator Murkowski, shame on you. You must stand with the shrimpers, the community, the wildlife, the earth, not big oil.

Over the decades I have seen the oil and chemical companies destroying our air, water, our wildlife--and the government going along with it. Politicians like Murkowski take campaign money from big oil and then get in bed with the same oil companies. This must stop. Our livelihoods, the health of our coasts and our childrens' futures are at stake. Enough is enough.

Diane Wilson, founding member of CODEPINK, is author of An Unreasonable Woman: A True Story of Shrimpers, Politicos, Polluters, and the Fight for Seadrift, Texas.  Read her most recent article, “The BP oil gusher is just the latest in a long line of assaults on the Gulf of Mexico” published on Grist.com