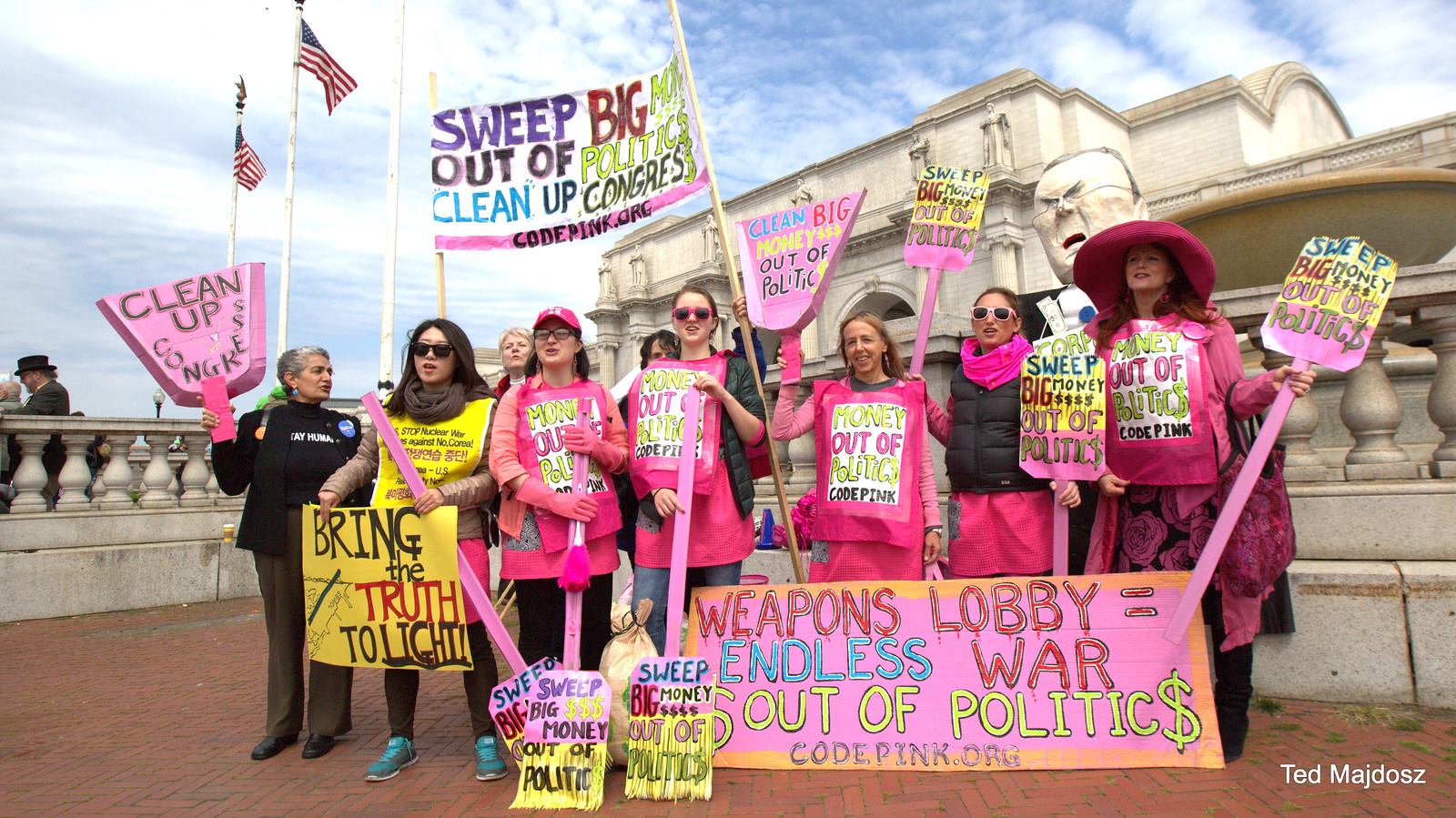 Democracy Spring went into full bloom yesterday as over 400 activists got arrested at the steps of the Capitol in Washington, DC. Medea Benjamin, Jodie Evans, Rebecca Green, Tighe, and the rest of the CODEPINK contigency helped to lead the march to the sit-in; later Jodie, Rebecca and I got arrested and spent much of the night in a holding cell with the police. 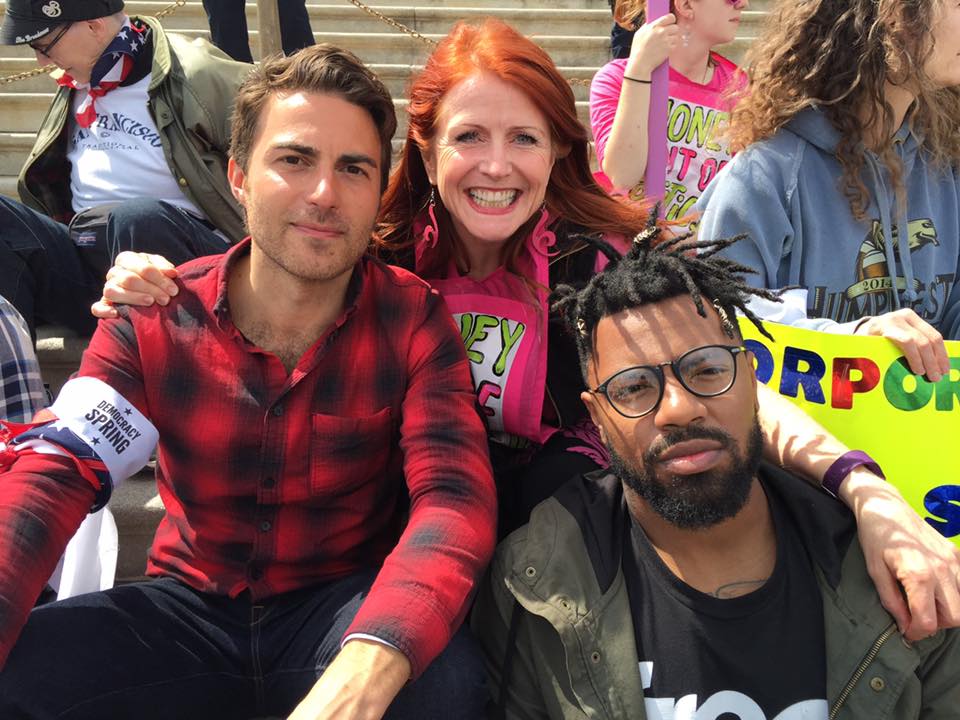 Yesterday's rally began at Columbus Circle, where a thousand plus protesters gathered to hear speeches and mingle with the marchers from Democracy Spring. Cenk Yugur from The Young Turks and other leaders for campaign finance reform delivered inspiring messages before marching in mass to the Capitol to stage a demonstration that demanded our politicians act on four bills before Congress that would address the terible plight of money corrupting our politics.

An amazing energy pulsed through the crowd as activists took over the streets with banners, signs and chants that called for the people to reclaim their democracy: “Whose house? Our house! Money out, voters in!” and “Yo, Washington, don't give me no sass, you all been taking orders from the donor class” echoed from the buildings that lined our path to the People's House. 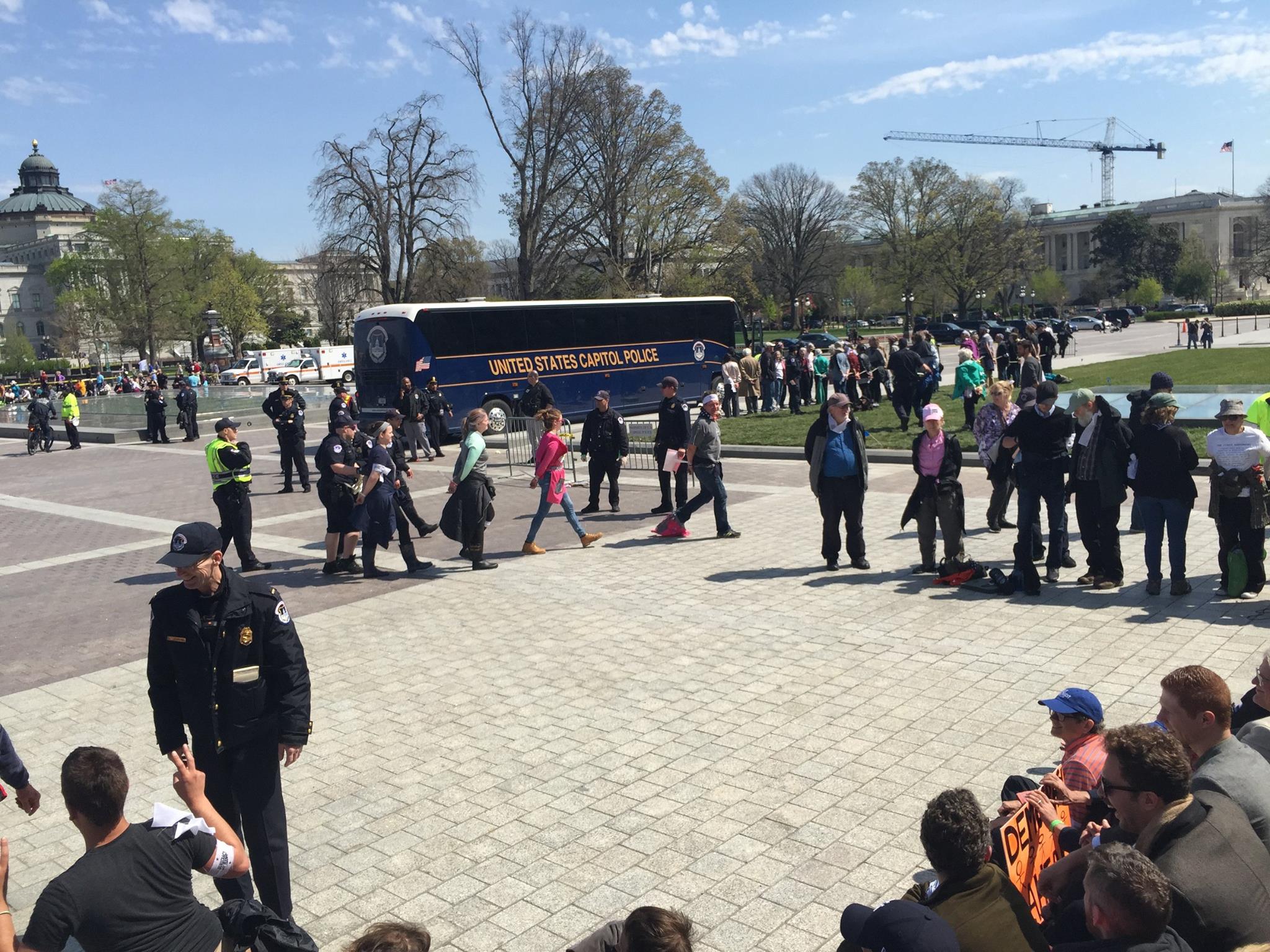 For those who had walked 10 days from Philly to DC to begin a weeklong sit-in, the march provided a climatic moment where all our energy, pain, joy, compassion and desire for a unified republic flowered into a demonstration of beautiful people simply asking that our politicians do their job and represent us instead of wealthy oligarchs. For all the effort, those sitting in at the Capitol steps got handcuffed and led off to a warehouse to spend the rest of the day and evening in lockup.

No matter. As I exited the police station after paying my fine just an hour ago, I watched over 200 elders march by and  carry the torch for another day of demonstrations that would lead to arrest, all for asking that our politicians stop their form of pay-to-play politics and begin behaving as representatives of the people. Once these elderly folk are processed through the system, another group will take their place, and then another, and another, until Democracy Spring morphs into Democracy Awakening over the weekend.

For all of us gathered here in Washington, and for those hearty souls who marched from Philly, we know that change is coming now. We energize and unite each other. Ask any of the protesters gathered here and they will tell you this is the place to be. Our movement is growing. Our discontent is finding its voice. And we are finding each other.

Please join us in retaking the People's House and making this a government of, by and for the people —  and not the oligarchy busy destroying our planet. When we find each other, we find our voice. The time has come for the people's voice to be heard.

Cenk Uygur was arrested for peacefully protesting corruption at the capitol yesterday with Democracy Spring. The largest arrest at the capitol ever and yet not a mention in the media. He has some poignant reflections on his thoughts and feelings around the incident — well worth watching: