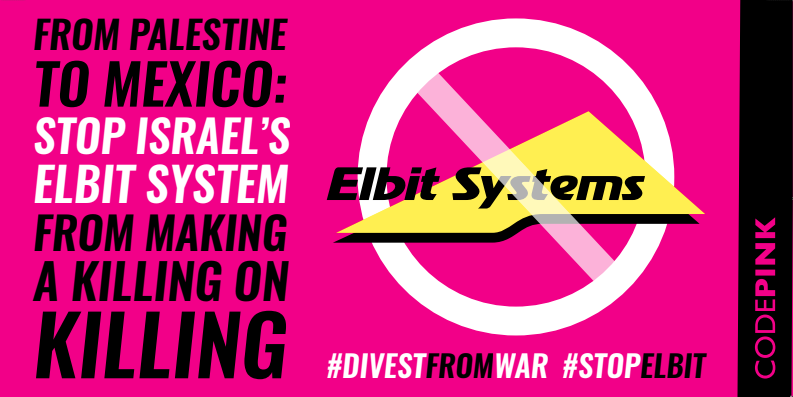 Every 10 minutes a child in Yemen dies from war-related hunger and disease—a humanitarian crisis of epic proportions. In Gaza, Israeli snipers have killed over 200 Palestinians demanding their rights as part of the Great March of Return and severly injured thousands more. In the name of "homeland security," the border between the US and Mexico becomes more militarized and more deadly for migrants year after year.

Meanwhile, weapons companies like Lockheed Martin, Raytheon, and Elbit, and the financial firms like BlackRock and BNY Mellon that invest in them, make billions of dollars. Shame on all these war profiteers!

Join CODEPINK on Monday, December 3rd to shine a light on how BlackRock and BNY Mellon are profiting from killing, repression, and settler colonialism around the world.

BlackRock and BNY Mellon are just two of the banks making bank from investments in Elbit, Israel's largest "defense" company. Elbit manufactures part for drones that fly over Gaza and for the tanks that are destroying Palestinian fields. Since 2009, Elbit has been building surveillance towers on the US-Mexico border.

At BNY Mellon, we will be delivering a letter to Heidi DuBois, BNY Mellon's Global Head of Philanthropy and Corporate Social Responsibility (CSR) calling on BNY Mellon to divest from Elbit Systems. The company claims a commitment the US Sustainable Development Goals. We know there is nothing sustainable about occupation and militarization so we'll be letting DuBois know all the ways that Elbit violates the principles that BNY Mellon claims to embrace.

Join us at one or both locations to expose how BlackRock and BNY Mellon are making a killing from killing. Together, we can #DivestFromWar and #StopElbit!