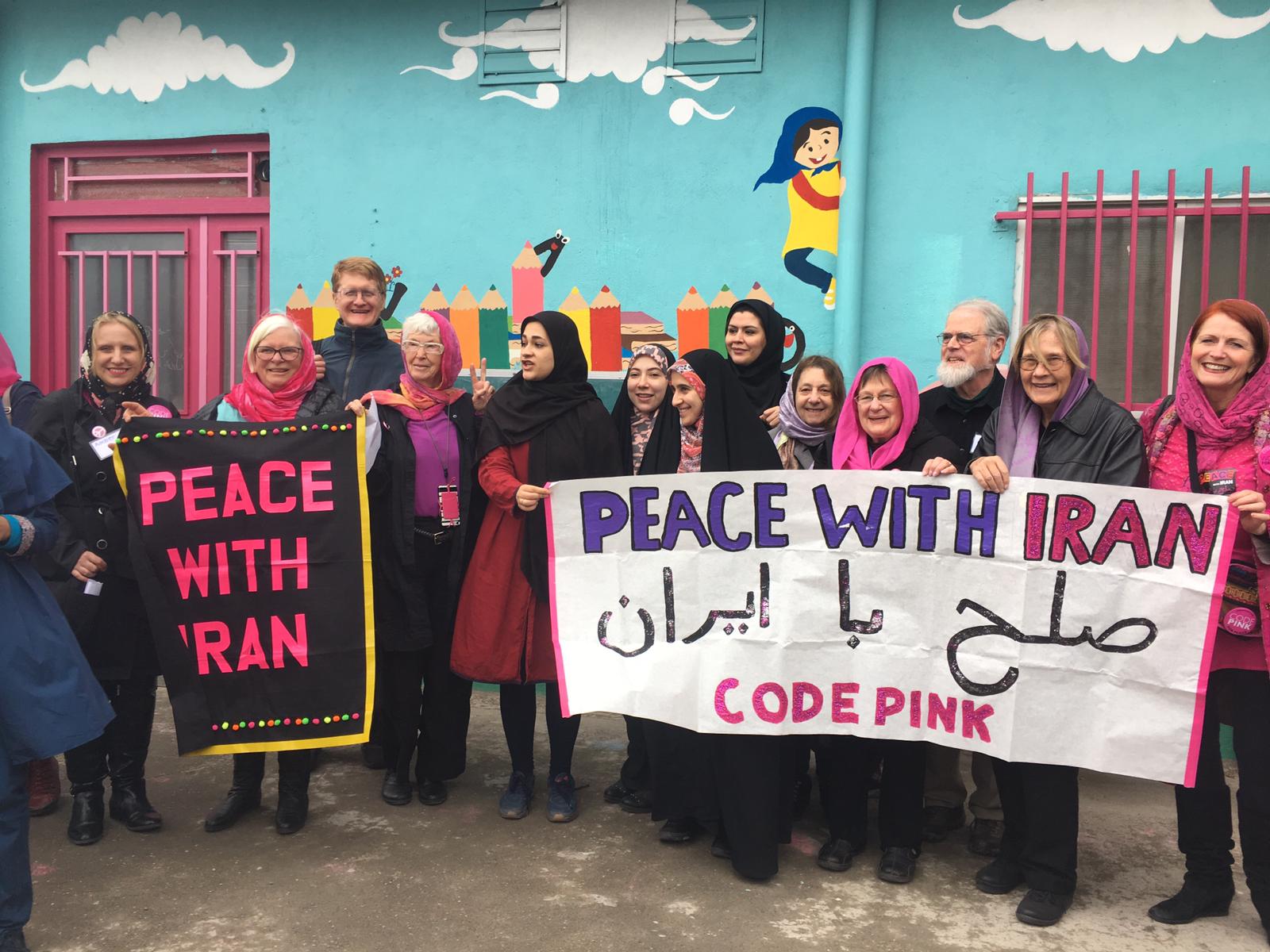 The day started  with interviews for the local media in the lobby of Medea, Stephen and Ann while the rest of us  enjoyed another abundant  breakfast and actually getting  on the bus on time.

We traveled for almost an hour through the crowded streets of Tehran to a new neighborhood. For the first time we start to see narrow beat up streets and distraught buildings. In what feels like an industrial zone we park behind a large fence with playful children painted across them. On the ride we had been cautioned about the children we were coming to see, maybe 30 of them, who work in the streets and have no parents, they might have visible wounds and be misbehave so we needed to be cautious and not take photos as it would disturb them. We are not prepared for the outpouring of love and joy of the next 2 hours. It is a school of 700 children ranging in age from 7 to early teens. There are 2 sessions a day, 8 to 12:30 and 1 to 5. It is apparent that the leadership of the school is someone and something very special. We are told they learn through play and it could be felt.  Art 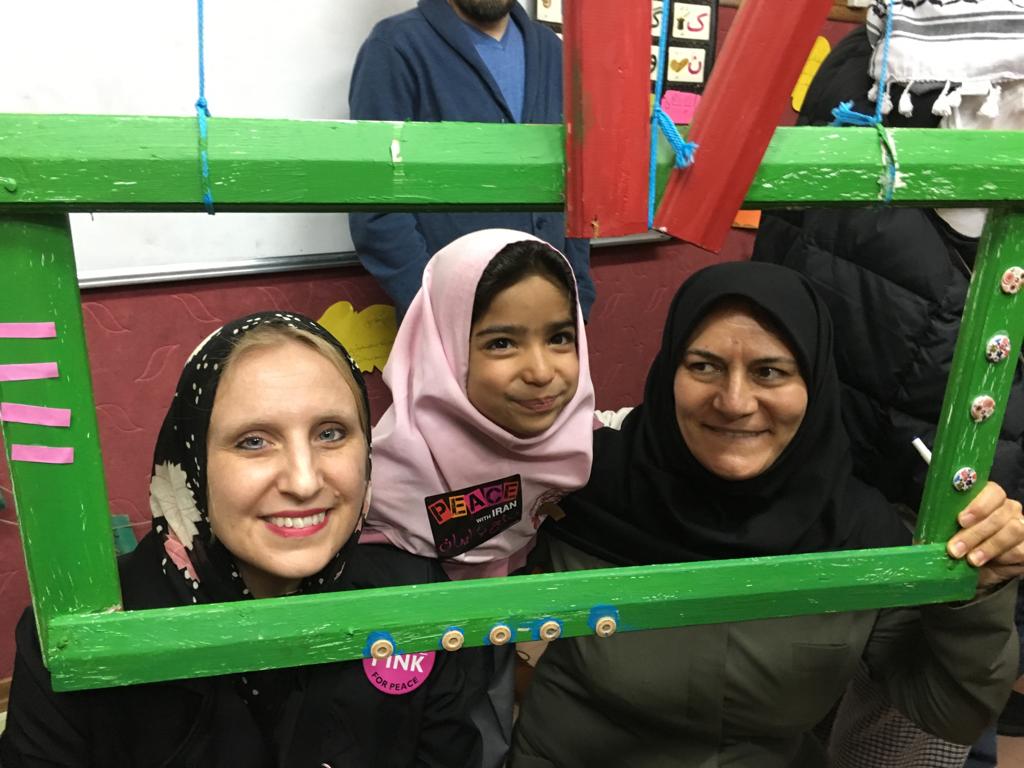 projects decorate each hallway, projects that tell stories and reflect the engagement of the students. Toothbrushes have been transformed to sculptures. We sing to them and they sing their song back to us about their mom and dad getting them ready for school. Peace with Iran stickers are very popular as they practice their few words of English and we share our few words of Farsi.  What is so striking is the love of the teachers to the students and the love of the students for each other, and the welcome we feel from both.  Curiosity and sharing is the energy from the minute we arrived. The cautions of the drive over had melted into a love fest of paintings and stories shared ending in robust open-hearted goodbyes. We load the bus nourished and hopeful, as we compare stories many  shared comments of the teachers to them, of the hope our visit brought them. Amber who is an educator was enormously impressed with the new thinking they were using at the school and very sad that the psychologist and administrator who founded the school were not able to come to the US. It is obvious the toll Trump presidency has taken on Iran during this visit. The enthusiasm for Americans and all things America has been dampened from my early trips here. 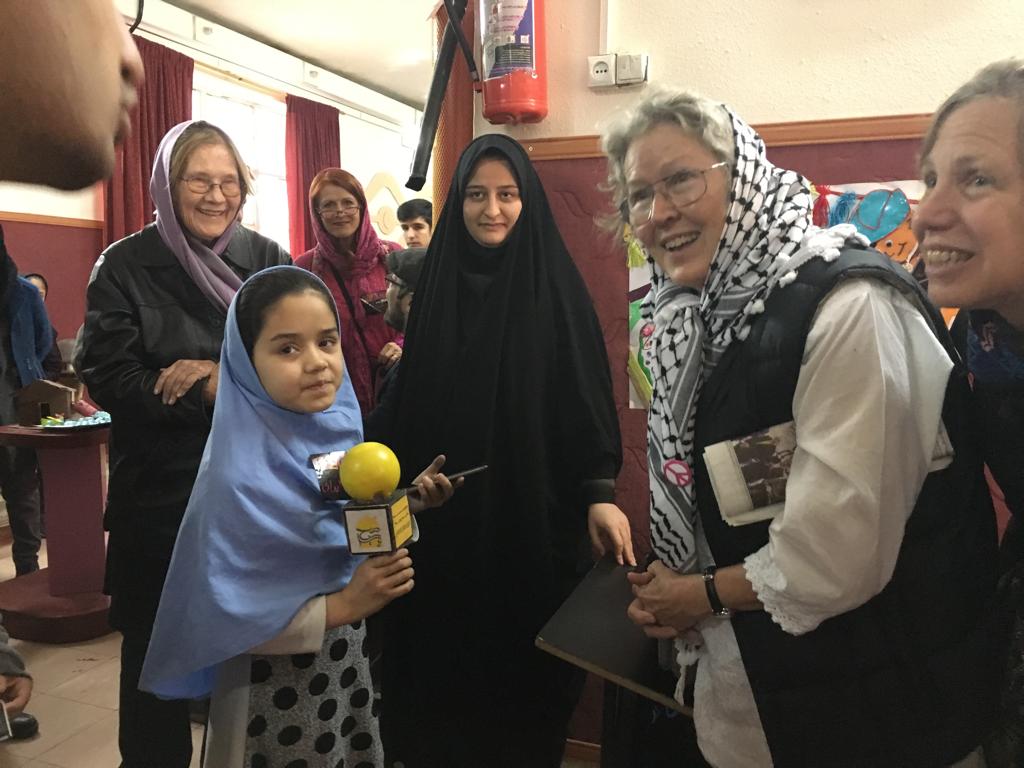 Our next bus ride is even longer, we passed the Great Bazaar of Tehran a market we are told days to cover the whole grounds. We drive past the city park which is their central park and known for an abundance of tulips when in season. Margaret Flowers mentioned how beautiful it was to be in traffic because the Iranians just melt in the flow of traffic like water. “Fabulous to see grownups who don’t get angry if the traffic isn’t going their way but find a way to flow to their destination, even if it takes them hours.”  They do need to something about transportation here, we learned from the head of the City Council of Tehran last night that 2.2 million people ride the subway everyday but he needs to triple that and get more people in the buses. The air is really suffering, I have watched over the last 15 years the bright skies of Tehran turn gray.

A nuclear reactor site was our next stop, advertised as the lab for their nuclear medicine, a non-negotiable stop, as much as we fought back this seemed the ticket for our visas.  It seems every time we push back on something they want us to do, the threat is that it will cost them their heads, and we get to go home, they have to stay.

“This is one of the weirdest things I have ever done, a nuclear reactor site in Iran”, was the immediate reaction from many of our group. What were we doing there and why did they want us to see this?  I think just a few of us had ever seen a nuclear reactor so it was fascinating for most, but with the translation hard to comprehend what we were seeing and what it was used for.   Their response was isotopes for medicine and teaching. But Jack, who went to Reed College and had seen the reactor there, said they were about the same; what was different was in the US there was great care around exposure security. Barbara questioned if was a good idea to build a nuclear reactor in the middle of one of the largest cities in the world. The response was, “This started 50 years ago, Tehran was smaller, and you have one at MIT in the middle of Boston.”  Barbara’s retort, “just because the US does something doesn’t mean it is a good idea.” We were running late and had to dash out before sitting to enjoy the tea and cakes they had laid out; we were the rude Americans who were tired of being used by the Iran nuclear story.  Competing interests clashed. 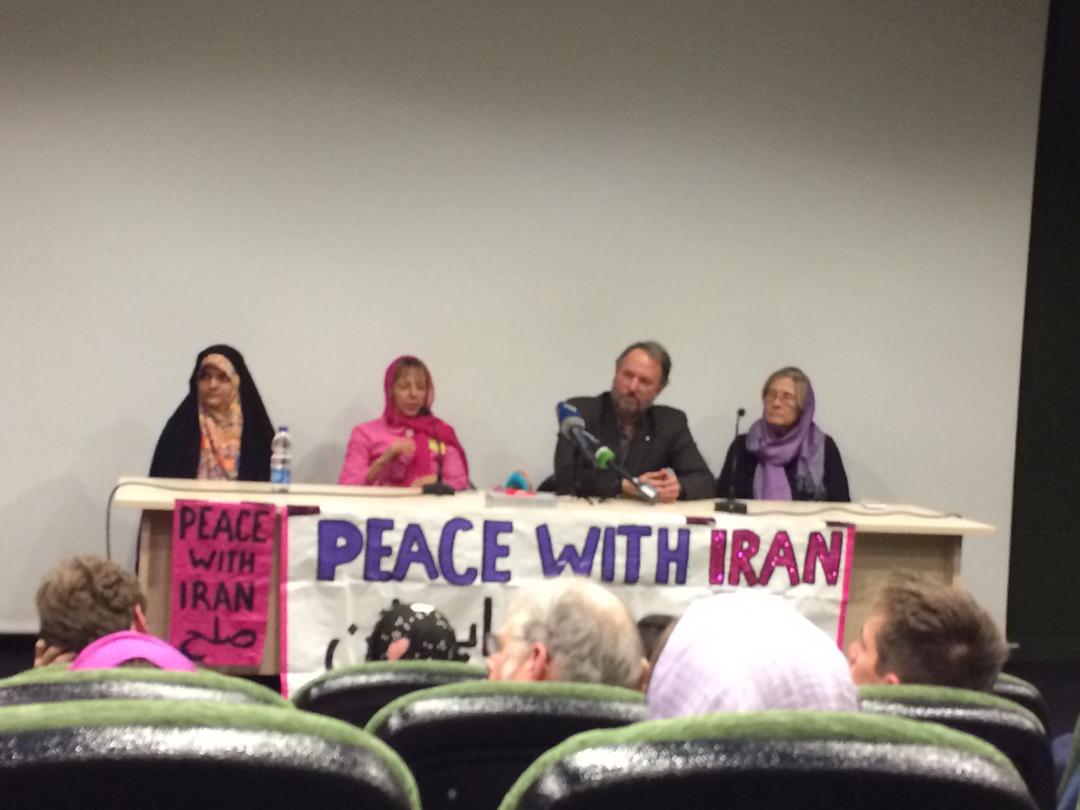 The press conference was 10 minutes away, the shortest time we had spent in the bus, at the Milad Tower, ‘the 6th tallest communications tower in the world’. Obviously a center of gathering for shopping and cinema. I found my way to the ladies room which was connected to a prayer room; many young women were sitting inside scarves off, gossiping and giggling. The press conference was about 90 minutes long as we all shared our experiences and reasons for being in Iran. One of the last questions was what those who hadn’t been thought of Iran, what surprised them?  “Despite the 40 years of sanctions, life goes on, you have less, things that have been invented outside of Iran they can’t have, despite all that you are not bending to the needs of the west and clearly not really suffering for it. You are a strong and resilient society.” said the always diplomat Ann Wright who reminds us that we are all citizen diplomats.

Stephen Zunes followed with, “Studies show Iran is the most hopeful people; they have great pride in their culture and history. Being here helped him to understand why they were so hopeful.”  I was struck by the questions, they too are begging to understand Trump and learn what we can all do to stop him. Iranians don’t want to lose faith in the US yet again, but you can feel palpably how Trump tearing up the Nuclear agreement feels like for them. They had moved forward for years in good faith and negotiations. They had come to an agreement that had already meant them giving up much and agreeing to much and they had held up their end. The abuse felt by the entire country, even those who are not in agreement with their government and united against US behavior to them. The sanctions instead of turning the country away from their government had yet again united a country against the US.

We drove 90 minutes through more bad traffic ending in a neighborhood layered with snow, we stepped out into the falling snow and 30 degrees. The meeting was with a Professor of Middle Eastern Studies from Tehran University who we discussed what we can do after our trip in conjunction with the University to educate both the US and Iran about each other’s governments and peoples. He discussed we live in an era of public diplomacy, informal levels, as formal diplomacy is failing.

The snow had finished as we left and we realized we were far far above Tehran, our translator had never seen the breathtaking view. Our last night in Tehran was an elegant restaurant with many guests our hosts arranged to learn about our work for peace with Iran. 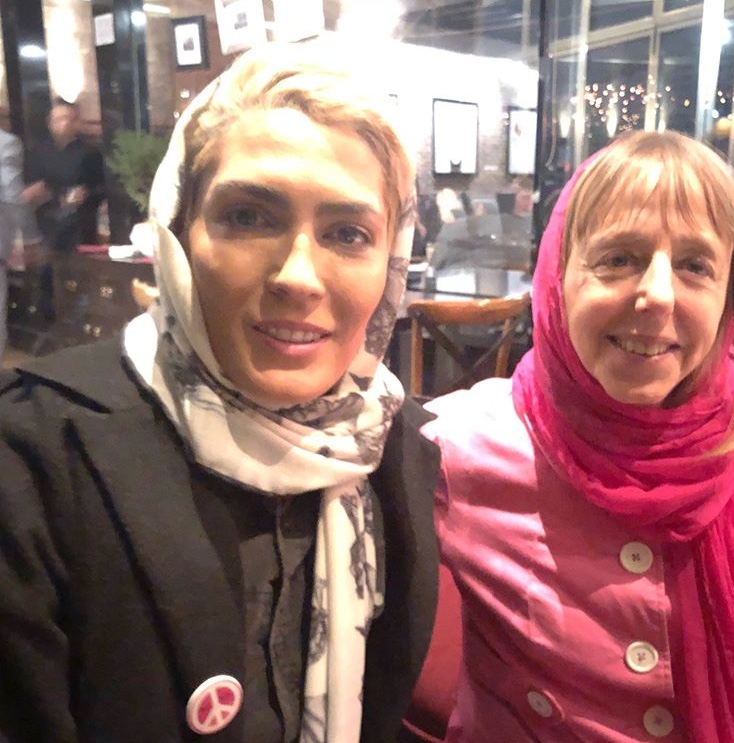 It was  overwhelming  the breadth  of Iranians who joined us:
Leila Taheri an entrepreneur who heads Takra, a rural development center, has felt the effects of the sanctions because her funding was from the European Union but she can’t stop her work as it takes years to build the trust in the  rural  communities. She is heartbroken and works to find the needed funds  that were promised to projects in the rural communities. Elahe Mansariyan a gold medalist in kick boxing who moved from poverty on a rural farm to starting a business to keep organic fruit fresh. She struggles from sanctions because much of her boxing money is made outside Iran and she is not allowed to open a checking account to bring the money in so she has to carry large quantities of cash, and it limits what she is able to do globally.  Actress Fariba Kosari who uses her privilege to raise funds for those waiting execution for manslaughter and save their lives.  Actresses, Negin Gooya and Ela Karimi who were delighted that we work for peace and are as frustrated with wearing their scarves as we are. Zahra Naghavi makes lab equipment for research and has been hit hard by the sanctions.  We were also joined by the wife and daughter of a nuclear physicist killed by Mossad from Israel, she is also a professor and was wounded by two of the bullets.  They brought their friend a widow from the Iran/Iraq War. 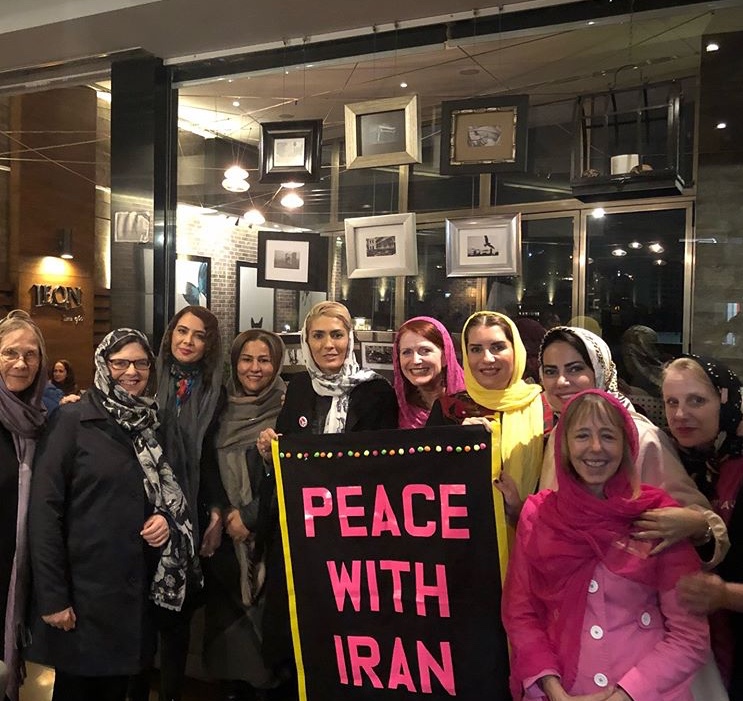 We finished the night talking about how we change the narratives in both countries with Professor Faoud Izaty from the faculty of World Studies. Exhausted but overwhelmed by all we encountered in our 16 hour day.