Medea and I (CODEPINK co-founders) are spending the week in Iran on a citizen's diplomacy visit, engaging with Iranian women's groups and officials to build bridges and create peace from the ground up. We arrived Friday. Here's a bit of our experience Monday (bit of time delay in getting this up…sorry!)

It is our third day in Iran and we feel like we’ve been here a month. We are all a bit bleary eyed, with too little sleep.  Poor Ann Wright has been hit with the flu, but she doesn’t miss a meeting.  Leila Zand, our trip leader from Fellowship of Reconciliation is managing three jobs while trying to handle her wild bunch (Medea and myself.)  Medea and I aren’t great at following rules, especially when they don’t make sense.  So to be in a form of a straight jacket probably brings our rebellious spirit.  Leila has to carry too much of our pent up energy and desires to see and do as much as possible in this short trip.  We are all walking the tightrope of wanting to bring more groups back.  This is the purpose of the trip and what we complained to Ahmadinejad about in September—the complaint that led to this trip.  To break open the knot between Iran and the U.S., we need more citizen diplomacy, and Medea and I surrender to the need and agree to what I am now calling Slow Activism.  (I think there is something in this I want to develop further with my Slow Food and Slow Journalism friends when I get home.)

There are people we have introductions to that we can’t meet because it would upset the government, at whose very consent we are here--having been denied entry previously.  So we are ALL on our best behavior.  I even think I have been able to keep my scarf on much more than the last trip.  It also helps us to better understand the terrain.  Our friends here learn how to navigate the political land mines.  International recognition here is a ticket to a freedom most Iranians who are politically active don’t have.

Habib knows how to use a vacuum and seems to know they are inherent in the structure of our visit.  Promises of meetings melt away and he is there with the replacement.  We were supposed to be at the U.S. Embassy this morning, a tour prepared by the government—it was even announced in the press.  But that and a meeting with the Foreign Minister were announced cancelled when we woke.  So Habib whisked us off to the a War Library at the Center for Artists. 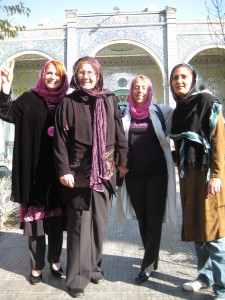 A pretty serious library of books about war from around the world including 800 they had published or arranged to publish themselves.  The director had been a journalist in the 8-year war and has given his life to telling its story to make sure another doesn’t happen.  A great partner for our War is So Over message....and a reminder it takes a lot of pictures, words and movies to tell that story.

Rostan came over to meet us when we returned from our daily dive into the horrors of war. Lucky we love Habib so much because he manages to spend most of his time with us breaking our hearts and taking us deeper and deeper into the devastation of the 8-year war.  I think when I leave I will feel like I was there.

We wanted to ride a subway and we wanted to go shopping—if meetings cannot be arranged, then please take us into the belly of the city!  We walked for blocks to the subway entrance.  Public transportation is priced right—20 cents for the subway and 2 cents for the bus.  It was about 3:30pm and getting close to rush hour so the train was packed and we had a choose between the men’s train or the women’s.  We chose the men’s train and it was packed. We had to push our way in to fit and of course all eyes were on the Westerners.  We went five stops standing and mashed together, the other women on the train were young or with a partner.

We emerged from the train to a bustling street.  There were hundreds if not thousands of women in long black chadors.  We had arrived at a community much more religious than the middle of downtown were we live.  It was a fantastic bazaar which, unlike that of Isfahan where it is mostly crafts, seemed to cater to the needs of the community (housewares were in abundance.)  Rostan told us that a wives’ family has to buy what is needed to create the new home, and all around us, young girls and their mothers where laden in housewares.  A tiled, arched entrance swallowed us and we got lost in catacombs of alleys laden with wares and Victoria's Secret-styled stalls with sexier lingerie than I have ever seen.  We found our way to a center with vaulted tiled ceilings.  Medea found a fantastic set of pink silverware, 33 pieces for $20.  Needing a toilet we learned there are mosques almost everywhere and they are the best place to look. We found a mosque just outside and were greeted with warmth and invited in. 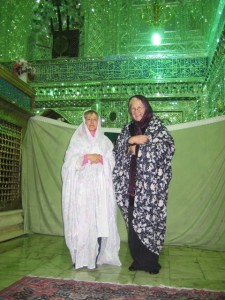 We were a happy bunch on an adventure, Medea making friends with the beet sellers and bent on finding a manteau that wasn’t so hot. 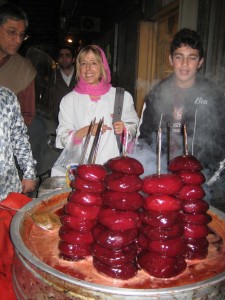 As darkness engulfed this neighborhood and the stalls closed at the call to prayer, we descended to the subway again.  There were hundreds of people, all in black, pushing to get through.  It was awesome to behold.  We thought of going up to take a cab but realized at rush hour it would take even longer.  So we poured ourselves into the throng and decided this time we would try the women’s car. 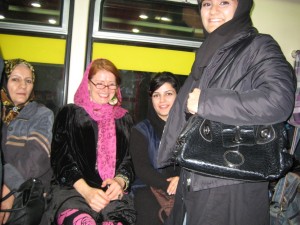 What fun! We had a delightful conversation facilitated by a young woman who knew a bit of English.  I love the curiosity of the people in Iran—they simply stop us on the street to know where we are from and it reminds me of our visits to Iraq. As I would come home to Venice Beach after being in Iraq and know just how closed a society I live in.  There is no curiosity in those streets. Just people going somewhere, and when I have the openness that lingers when I come home, people think I am crazy.

All the young women in the subway car have graduated from college—an urban planner, sociologist, doctor, teacher and mother’s with their young children.  It is much saner than the men’s car and we get the wisdom of the separation. We went a stop past ours to find chador stores for Medea.  We walked for blocks and blocks with no luck, finally there seemed to be one that was made of cotton.  She went inside to try it on and I met a student who came up to ask if I was serious about the big peace sign on my back. "Glad you are here for PEACE,”” said Essa Abrahani, a student of mechanical engineering. "Congratulations for being here, US idea of Iran is colored by revolution and 8 year war. Come visit and see who we really are,” was his message to Obama.  Medea emerged with a new outfit that they even managed to hem for her.

We had dinner in a richly layered restaurant full of music, courting couples, big families and the ever-present kabob. We had a fast dinner to be home for our weekly staff conference call on Skype from the internet café—and a late night of catching up on emails and blogs.