Day 2-Waiting for Delegates to Arrive 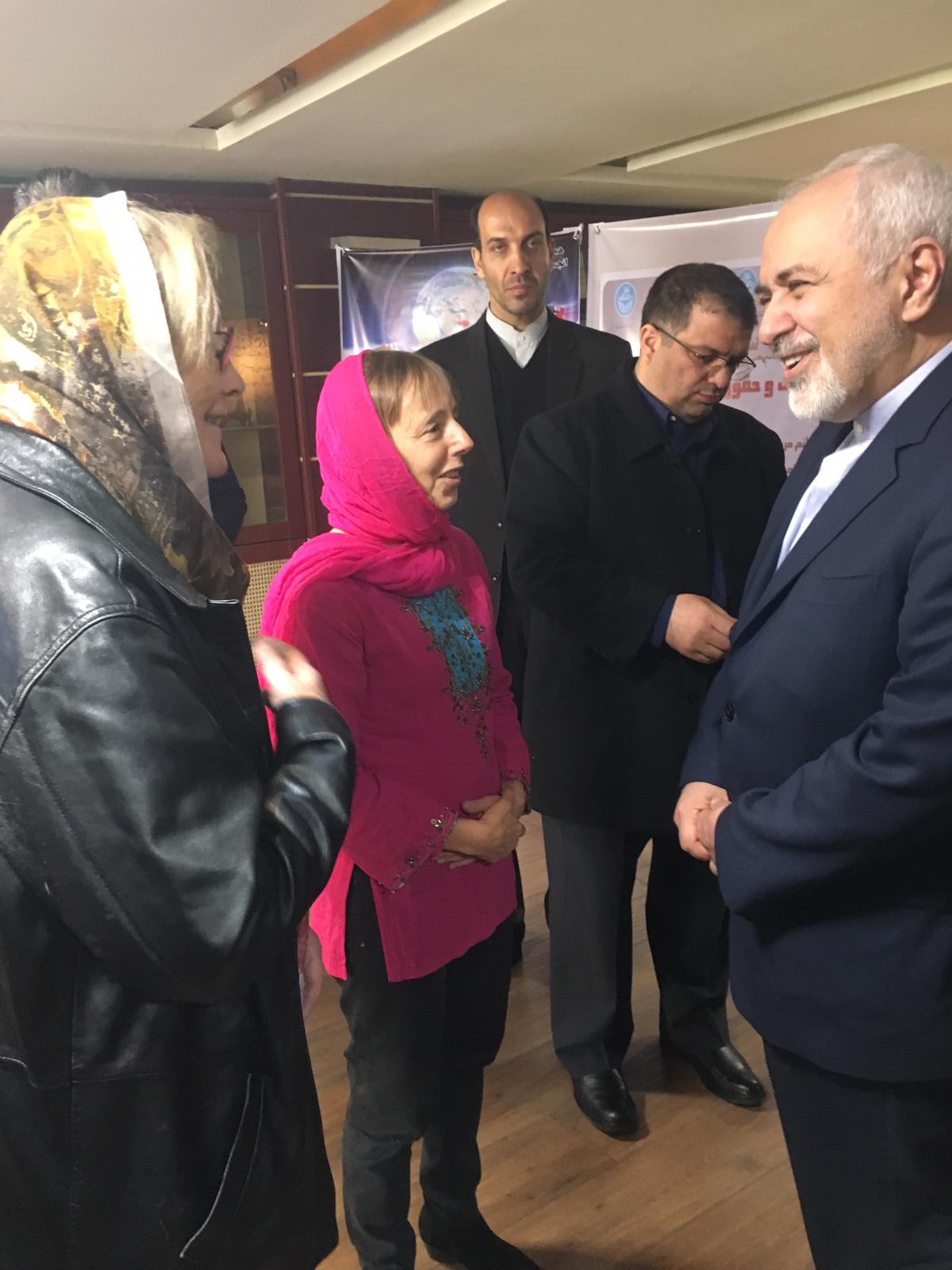 We’re waiting for the full delegation to arrive late this evening, but in the meanwhile Ann Wright and I had a full day.

I usually don’t write about breakfast, but the breakfast in this hotel is quite extraordinary—with items such as fresh honey you scoop out from the honeycomb, locally made red and green cheeses, fresh celery and carrots juices made from scratch in front of you, and about 20 different herbs you can pick out and combine for your custom-made tea. 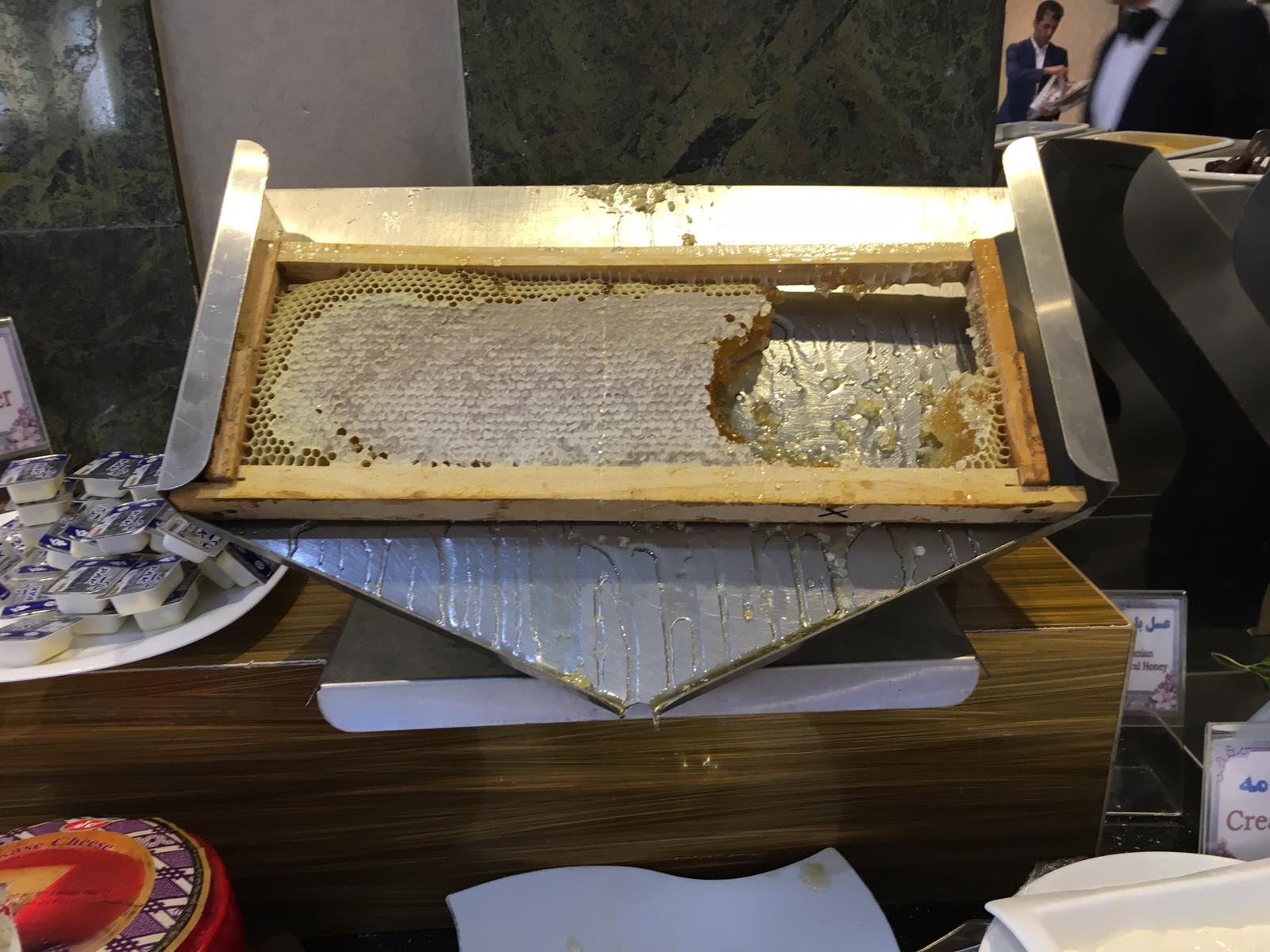 After breakfast we visited the University of Tehran’s Faculty of World Studies. We met a fabulous professor Foad Izadi who teaches US relations, as well as two professors who teach Middle Eastern studies. Foad did his studies, including a PhD, in Texas and Louisiana, and he also runs a new NGO Center for Peace and Justice (http://cfpj.ir). The Faculty of World Studies looks like a lovely program. It started in 2004, first with the Institute of North American and European Studies and then expanding to look at the entire world. It is not only for Iranians, but for foreign students who want to get an MA or PhD in Iranian Studies or Persian Language. And get this—the tuition for the language course is $900 for the year, while the MA and PhD programs are $3,600 a year. That’s quite a deal compared to US universities!

When we walked into the university lobby, we saw two big posters. One was for the symposium we are going to have at the university tomorrow (I was shown my name in Farsi, which was completely unrecognizable to me), and the other was for a seminar that Iranian Foreign Minister Javad Zarif was going to be giving today. Of course, we asked our hosts if it might be possible to meet the foreign minister. So just after he finished talking to the students, we rushed down to the lobby to get a chance to say hello. What serendipity. We got a chance to chat and also asked if it was possible for our group to meet with him tomorrow. We did have a meeting set up at the foreign ministry tomorrow, but not with the head honcho. He said, “I was supposed to go to Geneva tomorrow but my meeting was cancelled, so yes, I’d be happy to meet with your group.” Bingo. We are so happy that on the first official day of the delegation, we’ll hopefully get to talk to the foreign minister! 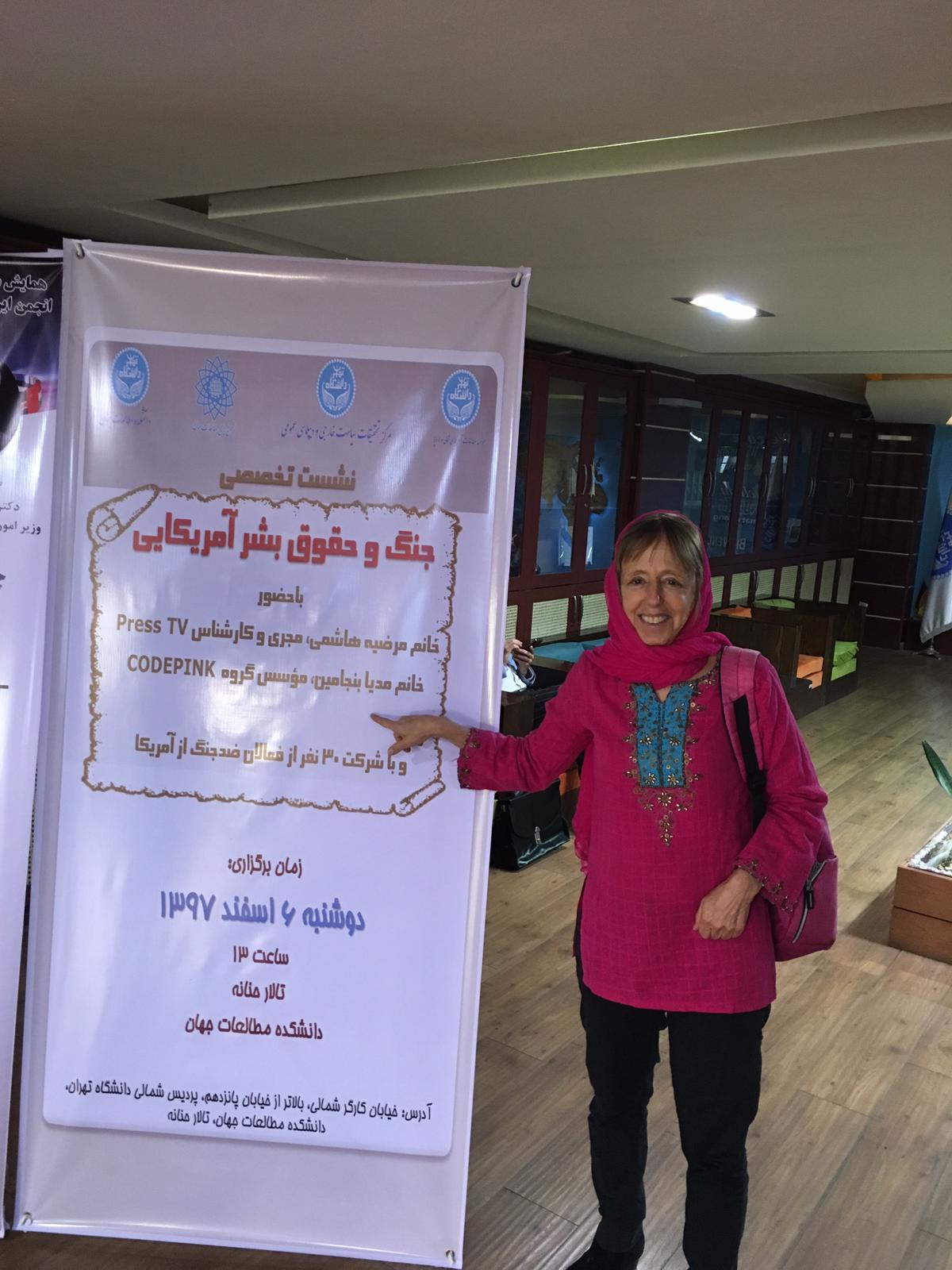 After the university we were taken to lunch in the posh northern part of town to eat in a lovely restaurant where many diplomats go. We got a chance to talk with one of our host groups, a NGO group that provides services to about 500 poor families, helping them with food and medicines. All of their work has become more difficult with the sanctions because so many more families are in need. Some of the people they work with are drug addicts, which is a big problem in Iran because of the vast quantities of opium shipped from Afghanistan through Iran.

The codirector of this NGO, Reza, told us about his brother, who had been held prison for 7 years in Iraq during the 1980s Iran-Iraq war (after Saddam Hussein invaded Iran). He was tortured in prison and as a result, his kidney malfunctions and he needs dialysis three times a week. He said there are now new, small machines where you can do this at home, but they can’t get the chips for them from the US. So they have to use the old, painful process of going to the hospital for six hours as a time.

After lunch we stopped by the government-run TV station Press TV and the Spanish version, HispanTV. Their studios were very simple and basic compared not only to US TV stations, but also the studios of rich Al Jazeera (from Qatar) or Russia Today. We had quite an intense talk with some of the folks who work there about what is and isn’t allowed in terms of press freedom. All national press has to fit within the framework of the Islamic state. There is, however, a lot of foreign press here—CNN, the New York Times, France 24, etc. In our hotel room I was surprised to see that we get CNN, BBC and Al Jazeera—all of which are pretty hostile to this government.

Our ride back to the hotel gave us a glimpse of the terrible bumper-to-bumper traffic in Tehran—and the accompanying pollution that by mid-day hides the beautiful snow-capped mountains just outside the city. To try to ease the congestion, the government only allows public transport in the city center and adds other driving restrictions. But the city is still teaming with cars and crazy drivers. Sometimes it’s better just to close your eyes and hope for the best.

Back at the hotel we met a fascinating young American who lives in Tehran and works for a Swiss pharmaceutical company that sells things like multivitamins and calcium pills that are very popular here. He explained some of the issues that make doing business with Iran so difficult, if not impossible. Overseas banks don’t want to deal with transactions to and from Iran for fear of running afoul of US government sanctions. Prices fluctuate every day. Most of all, he said, people’s purchasing power has become so restricted that they don’t have money to buy the products. He was going to try working here for another year and if it doesn’t get better, leave. Most of his business friends have already left. “I don’t see how this economy can function for long like this,” he said. “People’s best hope is to hang on until Donald Trump is out of office and a new president lifts the sanctions.” We are starting to hear that thin ray of hope from many people, which puts the well being of millions of Iranians in our hands. 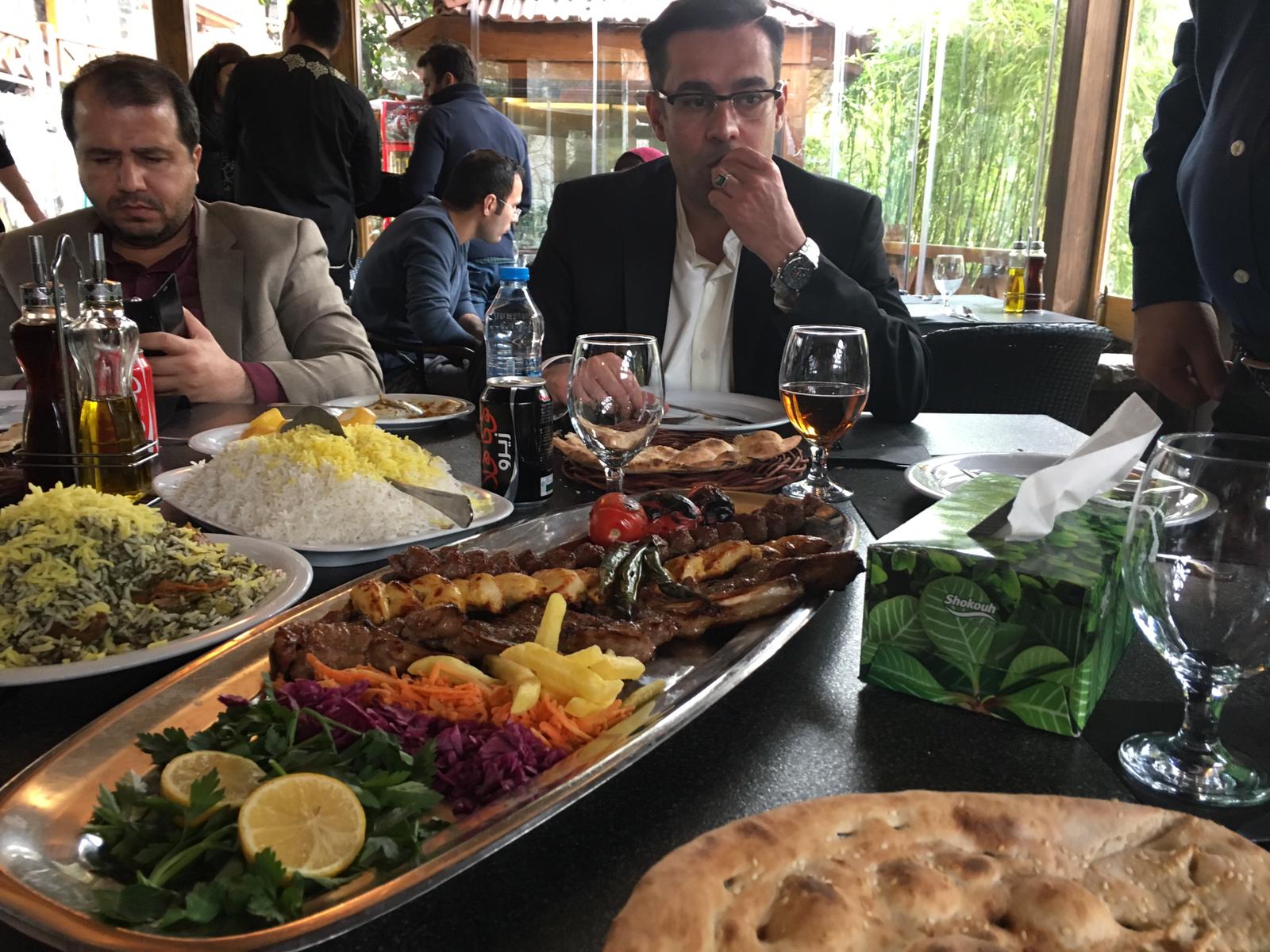 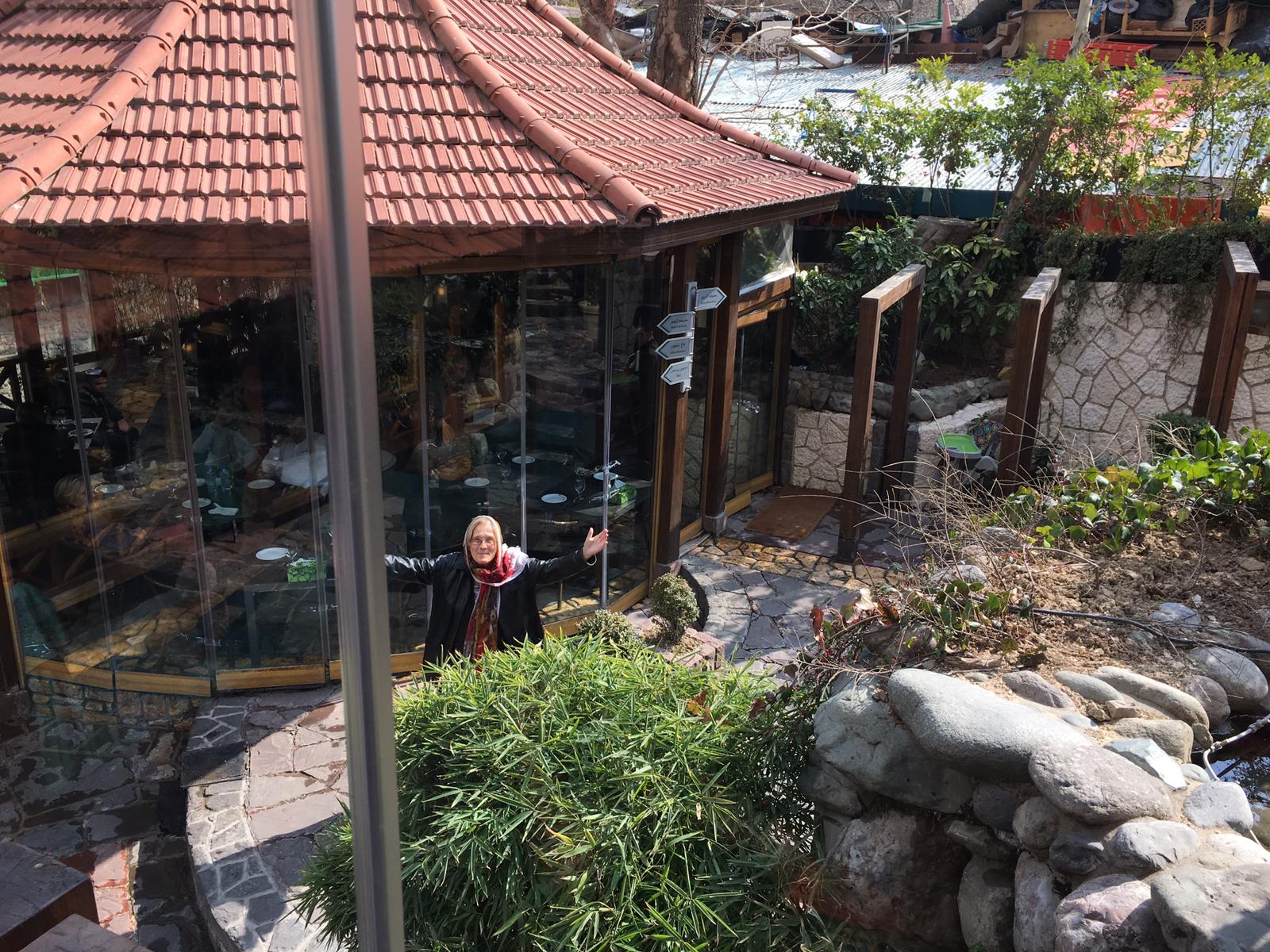