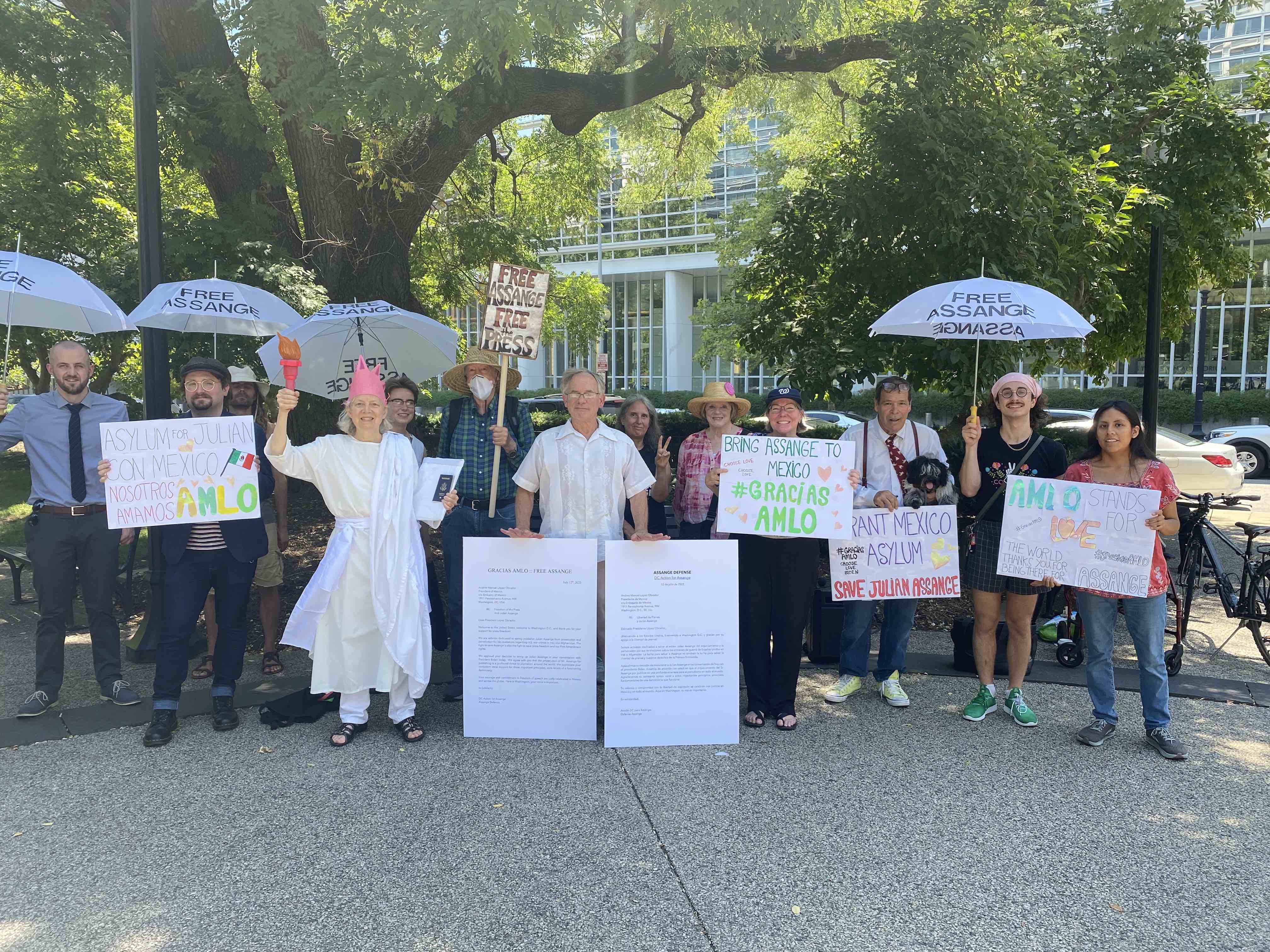 As Mexican President Andrés Manuel López Obrador met with American President Joseph Biden in Washington on Tuesday, activists from various press freedom and peace organizations delivered a letter to him at the Mexican Embassy. The coalition thanked López Obrador for his support for publisher Julian Assange and freedom of the press. Carrying “Gracias AMLO – Free Assange” signage, local activists celebrated Lopez Obrador’s announcement that he will raise the issue in his conversation with Biden. Below is the English translation of the letter in full.

Welcome to the United States, welcome to Washington D.C., and thank you for your support for press freedom!
We are activists dedicated to saving publisher Julian Assange from prosecution and persecution for his revelations regarding U.S. war crimes in Iraq and Afghanistan. The fight to save Assange is also the fight to save press freedom and our First Amendment rights.
We applaud your decision to bring up Julian Assange in your conversation with President Biden today. We agree with you that the prosecution of Mr. Assange for publishing is a profound threat to journalism around the world. We appreciate your consistent vocal support for these important principles, core tenets of a functioning democracy.
Your courage and commitment to freedom of speech are justly celebrated in Mexico and across the globe. Here in Washington, your voice is important.

Speaking at the rally held across from the Embassy of Mexico, Chip Gibbons from Defending Rights and Dissent explained “This isn’t just about the first amendment. Julian Assange is not a US citizen. Wikileaks is not a US publication. The US empire is asserting for itself the right to go anywhere in the world, hunt down one of its critics, torture them, abduct them, and bring them to stand trial in a kangaroo court in the Eastern District of Virginia under the Espionage Act, a law that for 105 years has cast a dark shadow on our first amendment. This is the law they indicted Daniel Ellsberry under. This is the law they put Eugene Debs in jail under. This is the law they used to keep democratically elected Socialist Party representatives out of the US Congress. It’s well past time we take on this law.” 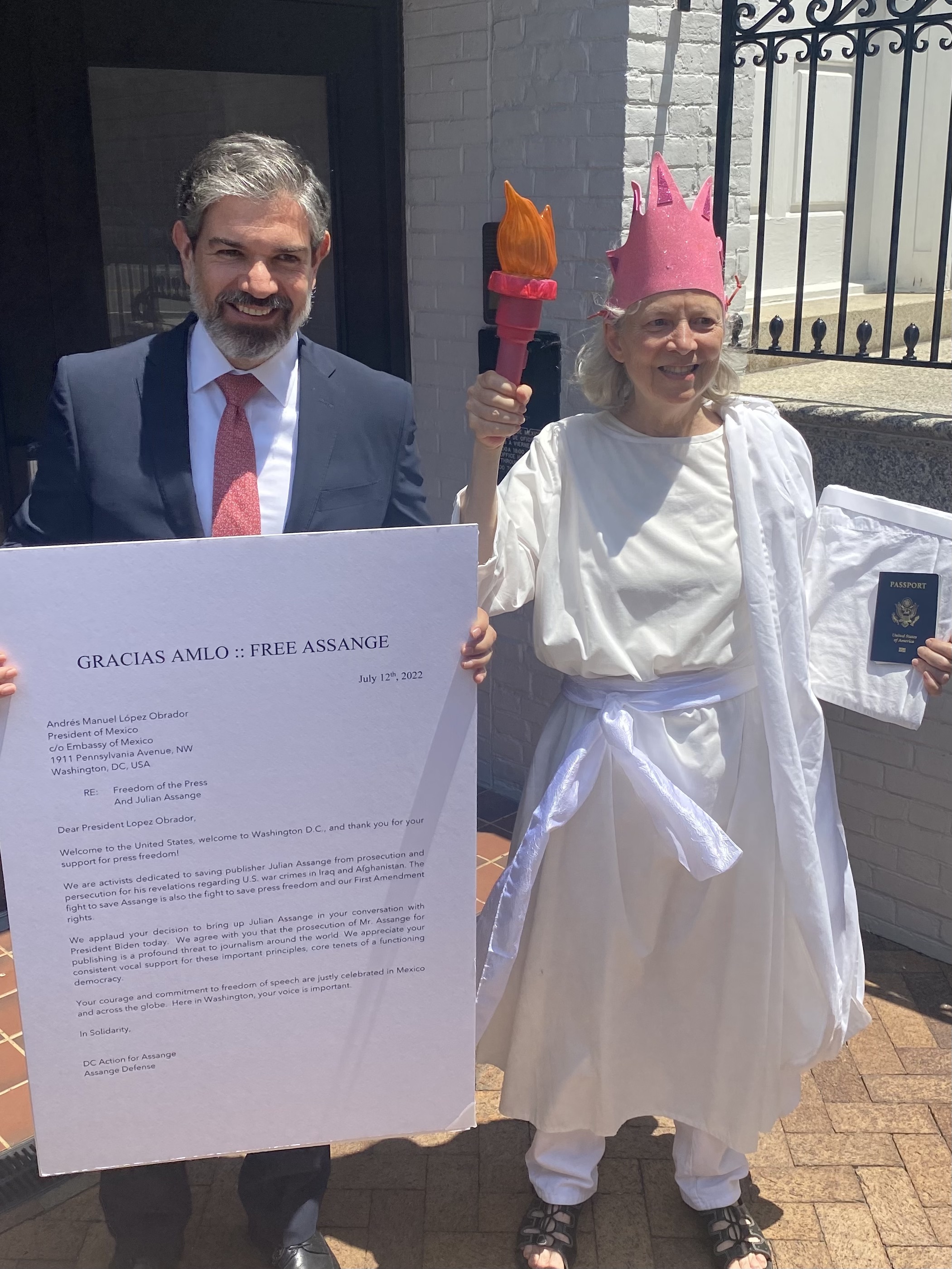 Prior to the visit, the Mexican President was quoted as saying “If he is brought to the US and sentenced to the maximum penalty, to death in prison, it will be necessary to start a campaign to dismantle the Statue of Liberty in New York, donated by the French, because it will no longer be a symbol of freedom,” offering Assange political asylum in Mexico should he be released from prison.

Attacks on Assange coming from the United States must be viewed as deliberate attempts to silence truth-telling about the crimes of the US empire as it continues to expand and militarize not only the United States, but many other regions which host its military bases and bear the environmental and human impacts of its operations.

As we struggle to invest in life-giving services for Americans and people everywhere rather than more weapons and technology for military and police, we must fight for the right of truth-telling journalists such as Julian Assange to expose the realities of America’s brutal, unchecked militarism and imperialism.