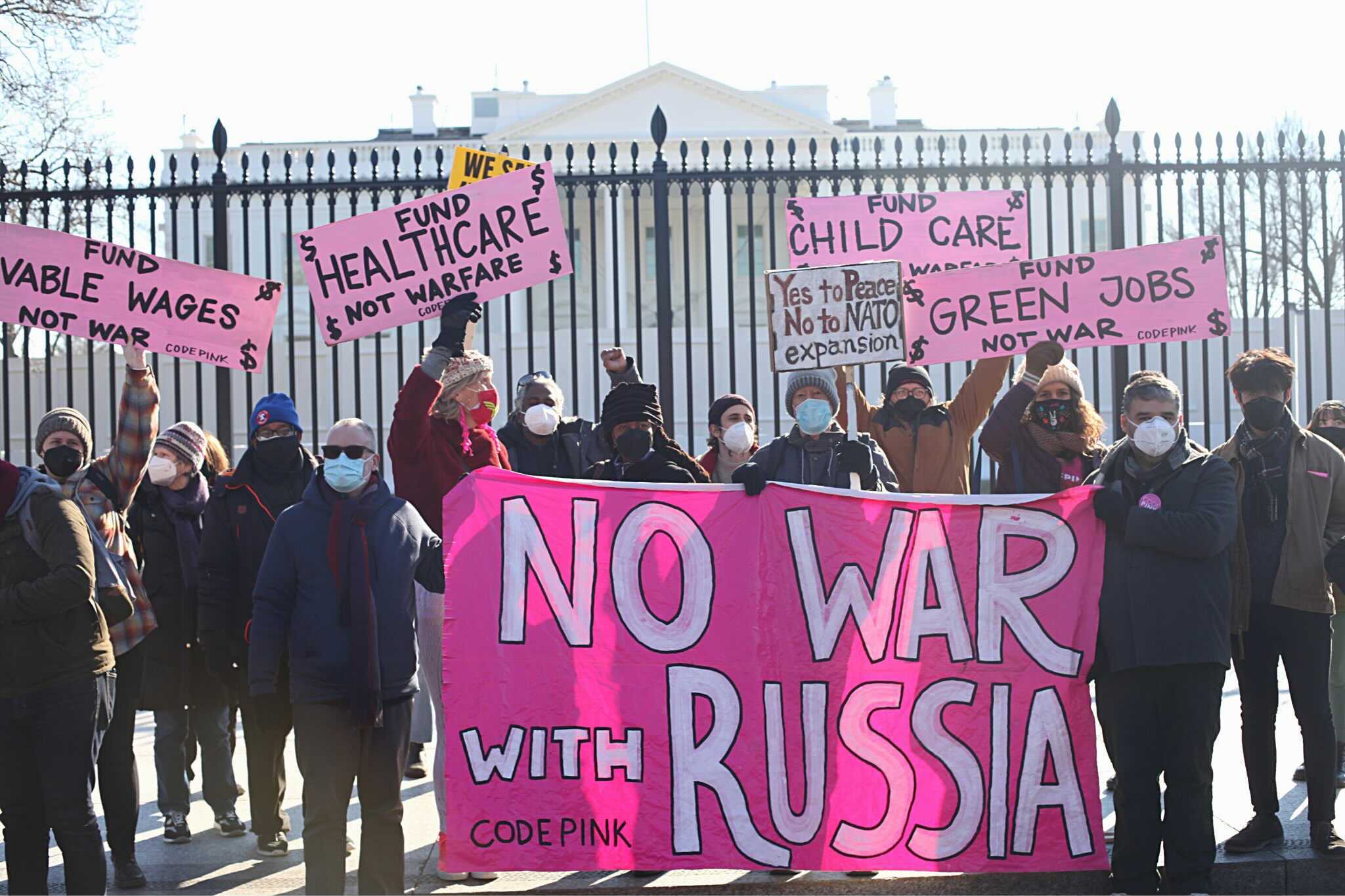 Today with Black Alliance for Peace, the Answer Coalition, Maryland Peace Action, and more we rallied outside of the White House calling out against a war with Russia.

President Biden has just ordered 8,500 US troops to be on heightened alert for possible deployment to Eastern Europe, as the dangerous escalation at the Russian/Ukrainian border standoff intensifies. Biden is also considering sending more warships and aircraft, and has already delivered more “lethal aid” to Ukraine. The $500 million Congress is set to pass through a fast-track vote, could and should be used on communities and climate. The Pentagon has said that there is the possibility of sending as many as 50,000 troops.

Some of our remarks during the rally:

The majority of people in the U.S. do not want war. For those who can, please mobilize, organize, and have demonstrations in the streets if you can and conversations and pressure those in power to not bring us into yet another war. The US and Russia are home to 90% of the world’s nuclear weapons. Our opinions about Putin and Russia while they may be strong are irrelevant to the danger and potential loss of life posed by a US war. Have we not learned our lessons in Afghanistan and Iraq?

For me, I was 11 when the US went into Afghanistan and 20 years later we’ve spent (that we know of) over $21 trillion on war, destruction of people and the planet, surveillance in other countries and here at home disproportionately hurting and harming Black, brown, Indigenous, poor and low-income communities.

Just last month, Congress passed a $768 billion dollar military spending bill. Who benefits the most from this? Weapons manufacturers, arms dealers, and intelligence companies: Lockheed Martin, financial institutions like Blackrock, the list goes on and on. If $768 wasn’t enough, Congress is ready to speed through legislation that would give $500 million MORE.

What IS national security and what should we be investing in instead? Since September, we launched a campaign to Cut the Pentagon budget and when asking people what they would fund instead it’s been housing, healthcare, childcare, quality education, covid relief, a liveable wag, green jobs, reparations for Black communities in the US and communities in the global south who have suffered under US imperialism.

The largest threat to national security is the climate crisis rooted in white supremacy, patriarchy, capitalism, and colonialism fueled by militarism as the Pentagon is the largest consumer of oil and emits more fossil fuels than over a hundred countries. We have 800 military bases across the globe and here at home. Right now, the ongoing Indigenous-led movement to demilitarize Hawai’i is working to shut down red hill after 100,000 homes have been affected by the navy jet contaminated waters.

The US continues to support the Saudi-UAE coalition in their imperialist war on Yemen that included a communications blackout this week, and funds and supports the ongoing Israeli occupation of Palestine with continued cleansing of neighborhoods. What is on the brink of happening with Russia is a moral, financial, and environmental nightmare. The United States and NATO have played a major role in exacerbating this conflict and we must now call on them to play a role in its de-escalation and stop war profiteering!