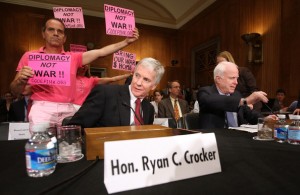 Today, June 8, the Senate Foreign Relations Committee held a confirmation hearing to examine President Obama’s nomination of Ryan Crocker, to serve as the new U.S. Ambassador to Afghanistan.  A retired diplomat and Dean of the George Bush School of Government and Public Service at Texas A&M University, Crocker received strong praise from all present senators for his past ambassadorial work in Iraq, Pakistan, Syria, Kuwait, and Lebanon.  Before the pitch of their softball questions, senators vowed their support for a quick confirmation process.  When confirmed by the Senate (the hearing left no doubt that he would be confirmed), Crocker will be replacing Ambassador Karl Eikenberry, a retired lieutenant general who, during his two-year term, developed strained relationships with U.S. military leaders as well as Afghan President Hamid Karzai.

The nomination in itself exemplifies the Obama Administration’s failure to create true regime change.  In his capacity as U.S. Ambassador to Iraq under President Bush, Crocker reportedly worked well with then-Commander of U.S. forces in Iraq, Gen. David Petraeus, who is currently serving as the Commander of U.S. forces in Afghanistan.  The reunification of the marketed Crocker-Petraeus “dream team,” credited with supposedly turning around the Iraq War, has been lauded by the likes of neoconservative political analyst and commentator Bill Kristol.  This suggestion that Crocker’s tenure in Iraq was “successful” is mind-boggling.  Over eight years have passed since President Bush’s “Mission Accomplished” speech and tens of thousands of U.S. troops remain in the country.  Nearly 5,000 U.S. troops have died and hundreds of thousands of Iraqi civilians have died as a result of the violence that has ripped apart their nation.

In the role of U.S. Ambassador to Iraq, Crocker advocated for the continued presence of U.S. troops in the country.  He consistently urged Congress to remain patient when deliberating the prospect of troop withdrawals, for he argued that Iraq required a strong U.S. presence in order to ensure stability.  This fact provides even greater reasoning to oppose Obama’s nomination.  At this time, President Obama is awaiting the Pentagon’s recommendation on the withdrawal of troops from Afghanistan.  Although U.S. civilians and even top U.S. officials are decrying the unsustainable nature of the Afghanistan War, top defense officials, including Defense Secretary Robert Gates, are pushing for a “modest” troop withdrawal.  Crocker could tip the balance in their favor, slowing down the process of channeling money from warfare to health care, education, and other life affirming activities.

At the hearing, Crocker did not comment extensively on the proposed troop withdrawal from Afghanistan in July.  He did, however, insist that the United States cannot afford to walk away from the war.  Furthermore, he emphasized that the chief goal in Afghanistan and additionally, Pakistan is to “disrupt, dismantle and defeat al-Qaeda and to deny it safe haven in those countries.”  Sen. John F. Kerry questioned exactly what it would entail to achieve a “safe haven,” as there are never any guarantees.  Crocker’s stated purpose could be utilized to extend the U.S.’s engagement in a war that, as Kerry stated, “in troops and dollars, is neither proportional to our interests nor sustainable.”  Needless to say, none of the senators present at the hearing spoke to Crocker directly about the real issues at stake:  the fiscal and very human costs of the war and how these staggering costs far outweigh any posited benefits.

Instead of effectively vetting a nominee who promises to uphold the same tired, failed policies, the Senate chose to applaud Crocker as a hero, a national treasure even, without a second thought.  One must remember that President Obama was ushered into the White House Crocker under a banner of “Change.”  Crocker is a recycled and reused nominee for U.S. Ambassador.  He will not bring any fresh perspectives to the table and thus no change that “Americans can believe in.”  This disappointing nominee and even more disappointing confirmation hearing should serve as a call to rebuild the flailing anti-war movement in the United States and abroad.  The longer U.S. troops stay in Afghanistan, the more money and lives that will be lost by this generation and the next.