Creech Air Force Base: A Place of Disbelief, Confusion & Sadness

Creech Air Force Base, just north of Las Vegas, is the headquarters of the Air Force's Predator and Reaper "hunter-killer" unmanned aerial vehicles (UAV), commonly called drones. The base is one of the epicenters on the war in Afghanistan. 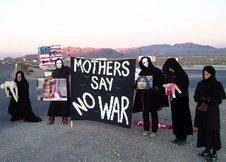 Beginning November 24, a dedicated group of CODEPINK women began holding a creative non-violent presence outside of the east gate of Creech Air Force Base every morning in the shivering desert cold and warm afternoons. The nine-day presence included a mourning mother’s costumed funeral procession with child-like coffins, a four-day fast, climate change action and civil disobedience. They were joined and supported by members of the Las Vegas faith-based, veterans and military family communities.

Each day they witnessed, young Air Force pilots commuting into the base to fly the UAVs to scout over the Pakistan and Afghanistan border and launch Hellfire missiles into the region often missing their intended targets, resulting in the deaths of many innocent people including children. Most problematic are attacks in regions where coalition forces don't even go and most of the dead are civilians.

There is a disturbing contrast between aggressor and victim. The aggressor zooming around Las Vegas in a posh automobile, living a luxurious life style and launching missiles onto a target that is far away and the victim located in a village or inside a building on the Afghanistan Pakistan borders. There are over 200,000 people in internally displaced camps (IDP) in Afghanistan because of US bombardment and war. The number one enemy in Afghanistan is poverty.

For many of those holding a presence outside of Creech Air Force Base, there is a look of total disbelief, confusion, and sadness. As the US troop presence in Afghanistan increases, the unmanned aerial vehicles (UAV) program will ramp up.

Read about the actions in the local spotlight here and in the news here.

Nancy Mancias is a CODEPINK activist and organizer who lives in San Francisco, CA.