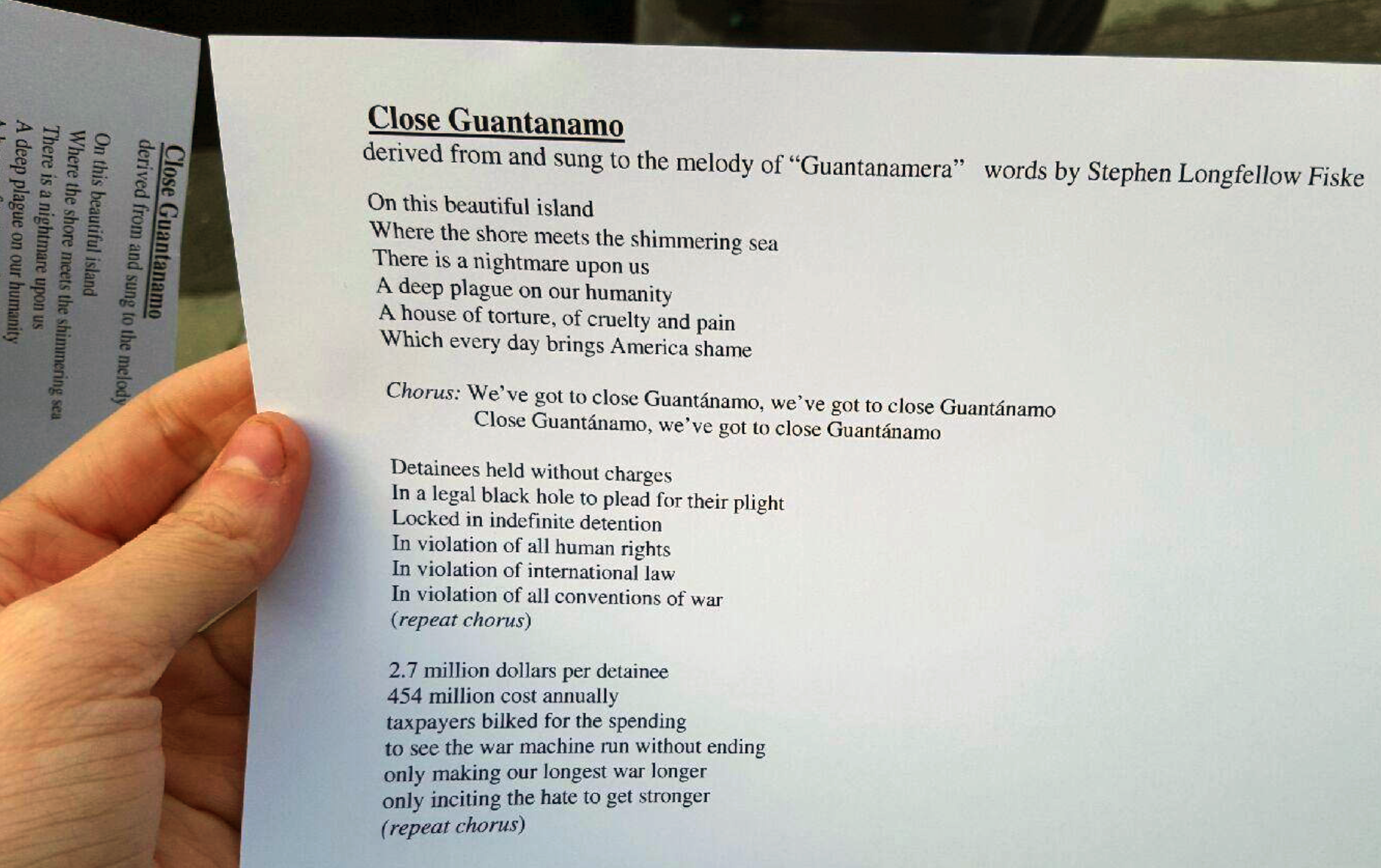 Get inspired to sing for peace at your actions by listening and reading lyrics to songs by Betsy Rose and others.

When the code is orange there's terror in the air
If it's flashing red go hide your head and say your prayers
They're trying to keep us frightened, like we're always on the brink
But I've got better things to do-so today I'm wearing pink

My mama thought a new pink dress would bring her daughter joy
But I just wanted blue jeans, I was running with the boys
She tried in vain to change my style- what would the neighbors think
Well mama, take a good look now- your baby's wearing pink

I never thought a color that's so dainty and so sweet
Could fire up all my engines, get me out onto the street
Just goes to show how womanpower can change the way you think
Throw out your basic black and gray and show the world you're pink!

We have tried negotiations
Signed petitions, walked the line
But the government doesn't see us
And he might as well be blind.
Now our new ways aren't nice
When we deal with men of ice,
But if that is Freedom's price,
We don't mind.

They're sending troops on new invasions
They've made a nightmare of Iraq
People dying by the thousands
And all our prayers can't bring them back
We'll raise our voices, pay the price
So don't you tell us we're not nice!
Cause if that's freedom's price

See the Code Pink activists,
The peaceful activists are having a lovely
Time today
But our goal is serious
And it's no picnic to play the big war game
Don't you mess with pacifists
We'll go wherever the call of duty still exists
This is how we serve and protect
The country we hold dear
That's why we're strong peaceful activists!

Hall of Shame Induction Song
(dowloads/Betsy_Rose_Hall_Of_Shame.mp3)
By Betsy Rose
(to the tune of "My Favorite Things")

Bring the troops home!
Use diplomacy!
Don't attack Iran!
And simply remember the oath that you took
And wake up and change your stand!

It's a Small World

It's a world of spying a world of lies
It's a world where you kiss your rights goodbye
It's a jail and a fine if you speak your mind
It's a small world after all!

It's a world of government waste and fraud
Spending our tax dollars on wars abroad
Lousy schools for our kids, health care just for the rich
It's a small world after all!

It's a world of terror right here at home
For our Constitution is overthrown **
Civil Rights disappear, now they rule by fear
It's a small world after all!

It's a world of people like you and me
Standing up for truth and Democracy
We are strong, we are free,
We can make history
'Cause it's our world after all!

By Betsy Rose (to the tune of "My Favorite Things")

Bring the troops home!
Use diplomacy!
Don't attack Iran!
And simply remember the oath that you took
And wake up and change your stand!

Singing For A Peaceful

I'll sit down, I'll hold a banner sing out my song
I'll even stop traffic cause this war is just wrong
I won't back away there's people's lives on the line
It's in the Constitution I can speak my mind

We Are The Old Women

You've caused too much care and woe
Out the door, there you go
Bye bye Gonzo
You've been Bush's legal tool
Broke the law, changed the rules
Bye bye Gonzo
You fired Federal DA's for no reason
You called it loyalty-we call it treason
So pack up your old law degree
We won't give you amnesty
Gonzo, bye bye

The list of all your dangerous views
Shocked the world, made the news
Bye bye Gonzo
Geneva Conventions are passe
Torture has its rightful place
Bye bye Gonzo
We won't even talk about Katrina
We'll just issue you a big subpoena
So now your time is finally done
The people's court has finally won
Gonzo, bye bye