Goldman Sachs is going down. 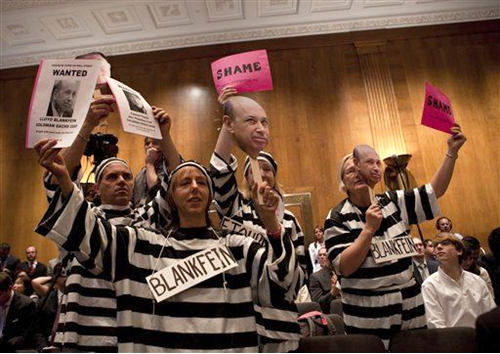 CODEPINK made the front page of the New York Times, holding placards during a Senate Committee on Homeland Security and Governmental Affairs hearing on Capitol Hill, where senators grilled financial behemoth Goldman Sachs for lying and defrauding clients in “shitty deals.”

The Securities and Exchange Commission has filed a civil action against Goldman Sachs for allegedly selling investment packages that were designed to fail, betting against its own clients. Basically, Goldman created mortgage investments without informing buyers they had been put together with help from a hedge fund client, Paulson & Co, that was betting on the investments to fail.


Newly released company emails also show that Goldman Sachs executives boasted about the money the bank was making while the US housing market was collapsing in 2007. Talk about having no shame.

"They're buying something from you, and you are betting against it. And you want people to trust you? I wouldn't trust you," Senator Levin said pointedly to the CEO of Goldman Sachs, Llyod Blankfein.

Senator Levin also made the hearing quite amusing by using the word "shitty" 11 times in questioning Dan Sparks, the former head of Goldman's mortgage department, on how long they had knowingly given "shitty deals" to their clients. Sparks only had non-answers:


Senator McCain also drew some kudos for stating that, "I don't know if Goldman has done anything illegal,” but “there's no doubt their behavior was unethical, and the American people will render a judgment.” The American people have made a judgment: Main Street does not trust Wall Street and Goldman Sachs will have to negotiate a settlement. What we really want though is for Congress to break them up.


In the meanwhile, someone tell Goldman Sachs to sit down, stop arguing and take whatever "slap on the wrist" given to them because the longer they stay in the limelight, the more their shares would fall on the market.

And instead of the civil trial they are facing right now, they might embolden more Congressional members to sign on for a criminal case against them. Indeed, the number has doubled from 18 to 44 members of Congress after the hearings today.