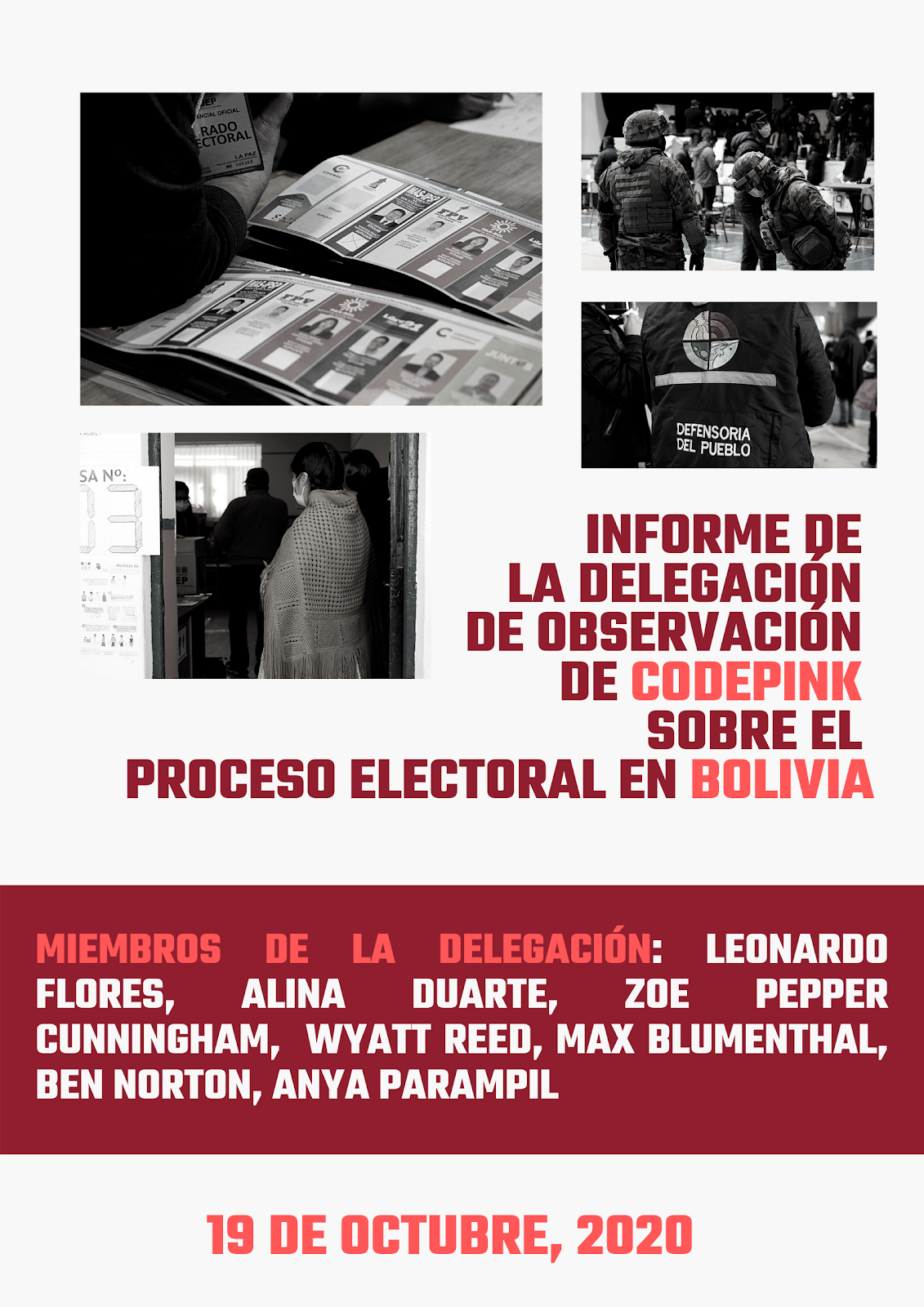 The CODEPINK observation delegation, composed of 7 people, had the honor and the pleasure to participate in the observation of the electoral process in Bolivia on October 18. We would like to point out that it was a successful day with high participation of citizens who exercised their right to vote in a peaceful and democratic way. We would like to congratulate the Bolivian people for these historic elections.

During the agenda established by the Supreme Electoral Tribunal (TSE) our task was to observe the electoral process and document any irregularity. In this sense we present the following report with the objective to share what were the irregularities that we saw as observers from our arrival until the night of October 18. 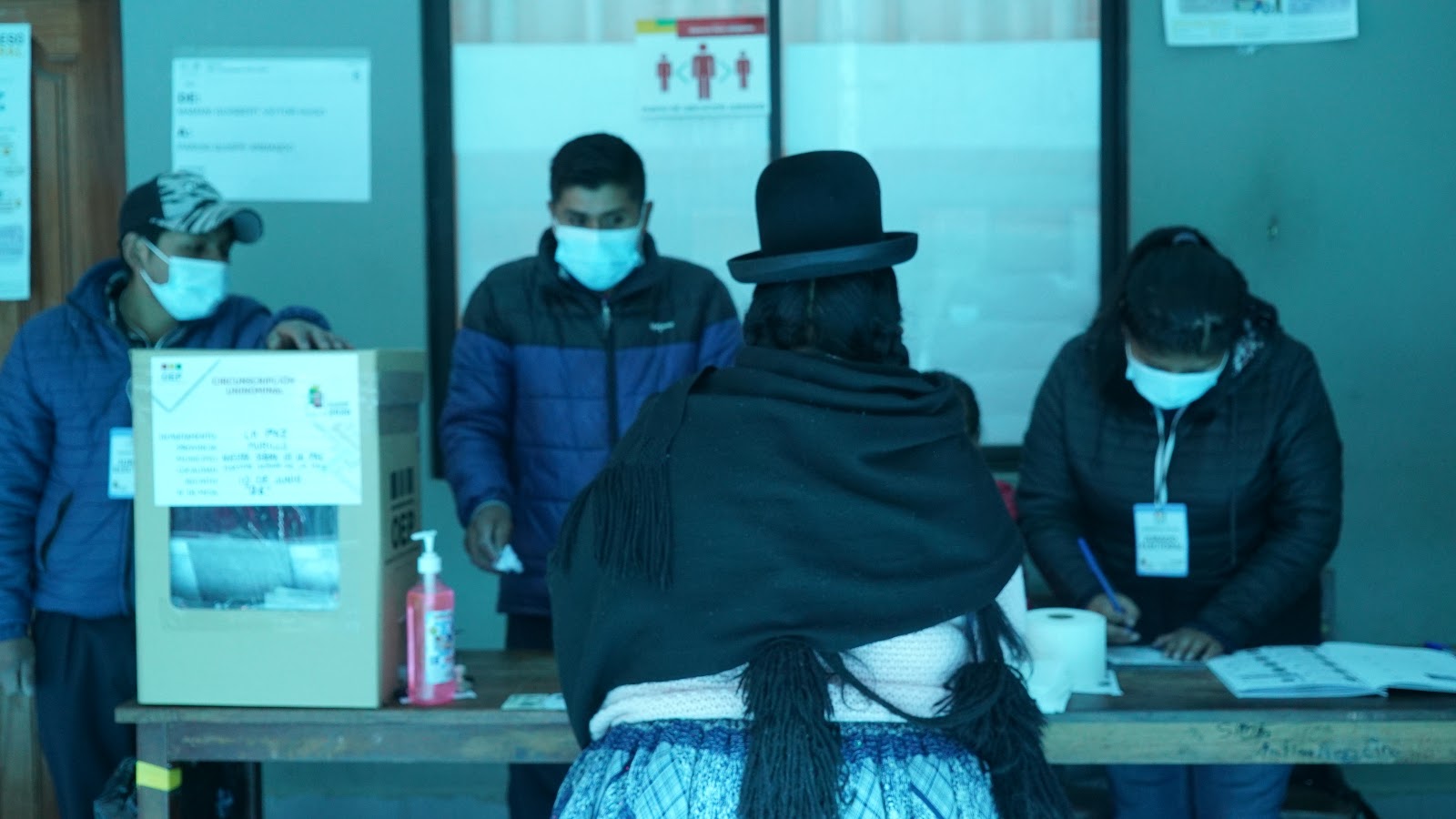 In order to address the different aspects of our observations, we have divided our report in four sections: 1) Threats to delegations; 2) Observations about the activities organized by the TSE; 3) Irregularities in the voting process; 4) Delay in the counting and polls.

This report was carried out with basis in the observation of the electoral process in the following voting stations:

1. Threats to the delegations

The hostile treatment towards the international observers was constant and caused us worry before and during the elections.

The harassment of electoral observers began even before their arrival to Bolivia, including threats and publications on social media calling members of our delegation “terrorists” and sharing photos of them boarding the plane in Santiago, Chile. We do not know if those who harassed and photographed us were private citizens or members of the intelligence apparatus of the de facto government of Jeanine Añez. 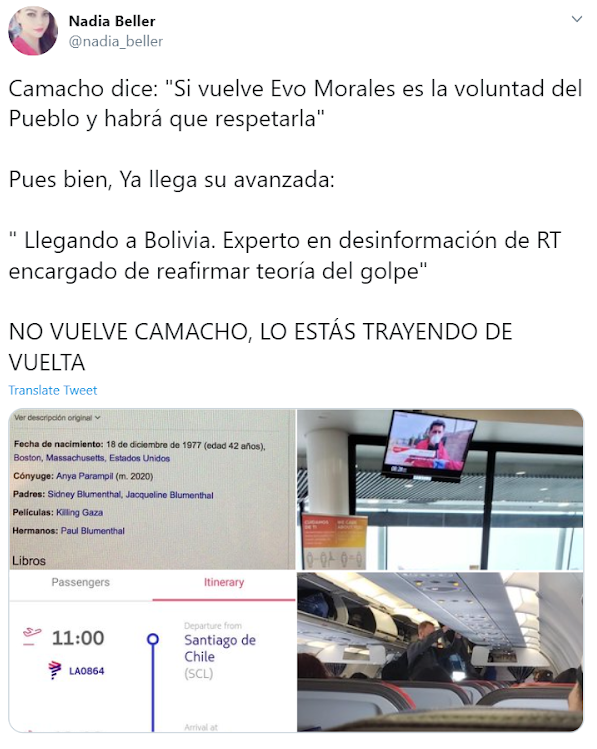 The general director of Bolivian Migration, Marcel Rivas, on his twitter account was part of this hostile environment declaring that: “The [Supreme Electoral Tribunal] sent invitations to 4 known agitators of the extreme left linked to the criminal regime of Maduro to ‘monitor’ the elections. The Ministry of Migration will enforce the law 370: those who violate the determined objective of their entry will suffer the consequences.” 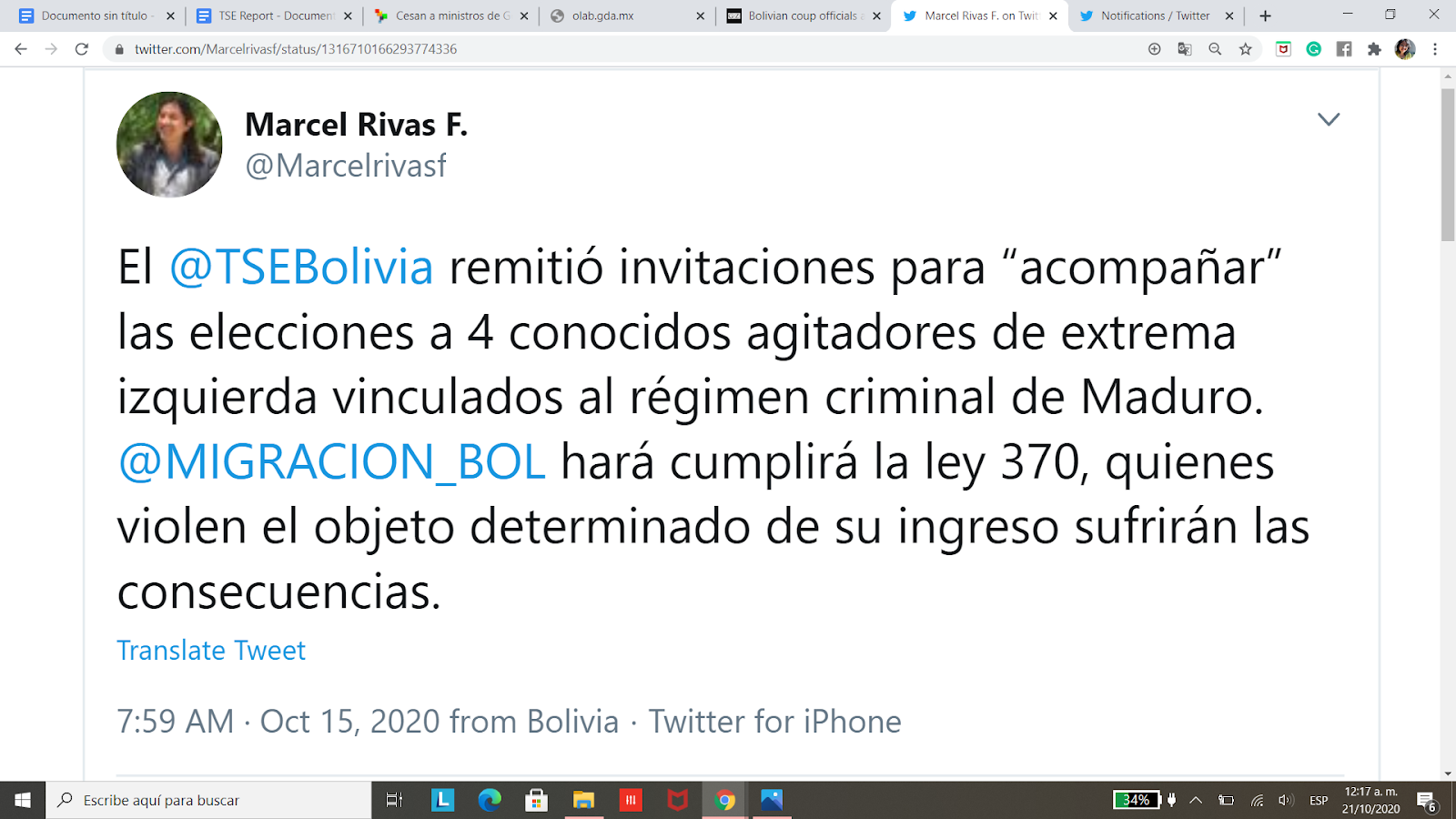 Hours after the photos were published of us on social media, it was the Minister of the Interior, Arturo Murillo who launched threats on social media: “Our elections will be a democratic party, the more observers there are, the better it is. We warn the agitators and the people who would like to generate violence, that they are not welcome. We will put them on a plane or behind bars. Behave, we know who you are and where you are.” 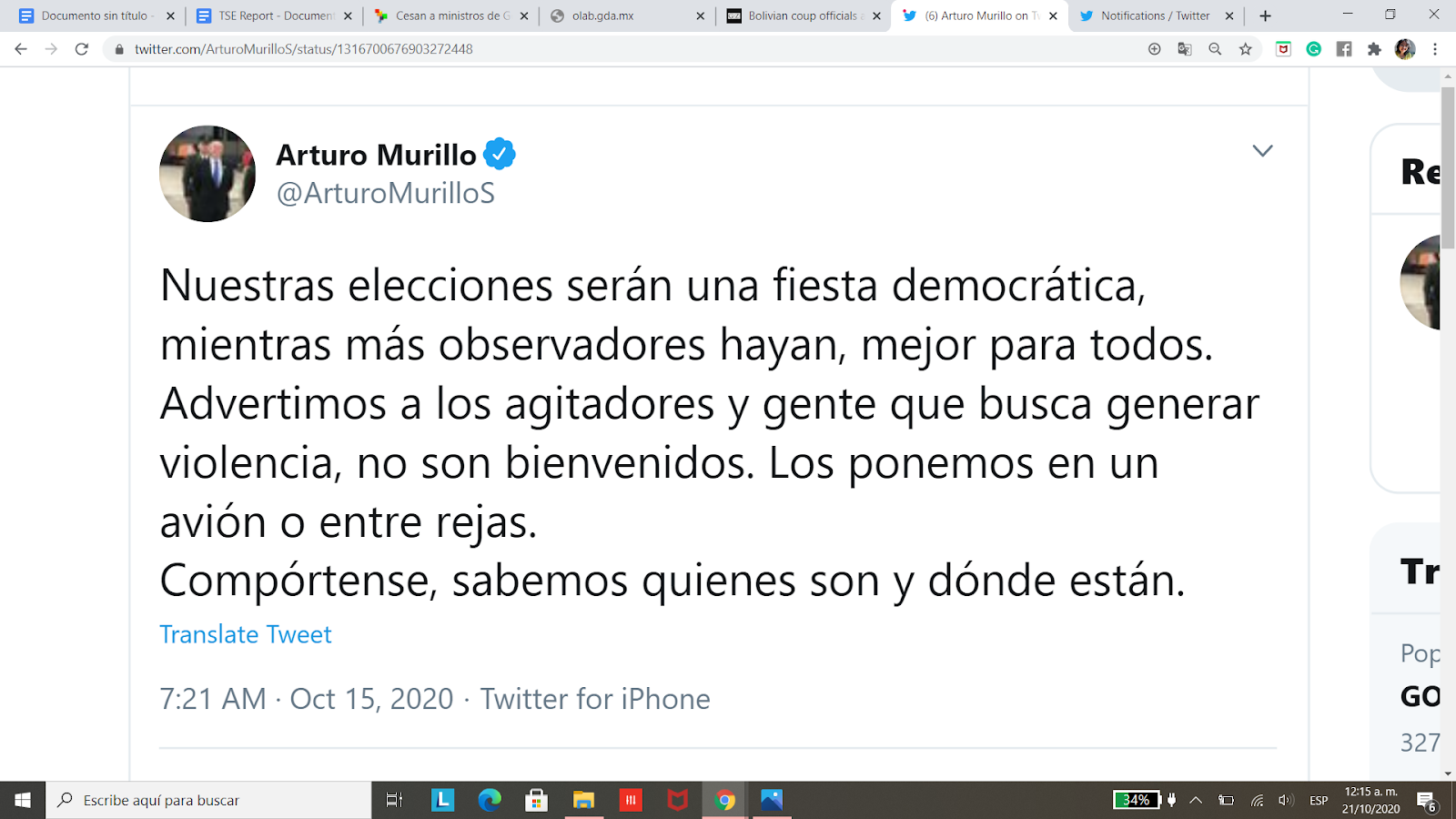 On the same social media accounts a campaign was unleashed against us, even reaching the extreme of classifying Max Blumenthal, member of our delegation and who works as an editor of the page, The Grayzone, as a “dangerous terrorist” and “propagandist” that supposedly arrived to Bolivia to “set the country aflame.”

An activist named Nadia Beller, published our photos on Facebook and Twitter, making it clear that they were monitoring us closely while we were in the airport in Chile. They also published photos of Blumenthal while he was boarding the plane in Santiago along with our flight itinerary, which we consider could implicitly encourage their followers to come to the airport to threaten electoral observers.

These photos that were completely harassing were later shared by well known personalities of Bolivian media close to conservative and reactionary positions like Agustín Zambrana Arze: others asked to create groups in order to stalk Blumenthal, follow him, “supervise” and film everything he does.

The campaign against us did not stop, the faces of four of the members of our delegation Alina Duarte, Ben Norton, Anya Parampil and Max Blumenthal, were shared along with those of 10 observers under the slogan “communist observers arrive to Bolivia.”

Electoral and governmental authorities did not say anything about the series of aggression and threats, we even expressed our worries directly to the president of the TSE Salvador Romero and we asked for a declaration affirming the right of all the electoral delegations to carry out our tasks in peace and tranquility; Mr. Romero refused to make a statement regarding this. The only thing he offered was to provide a police agent as security for electoral observers that received threats.

2. Observations about activities organized by the TSE

The Supreme Electoral Tribunal (TSE) did not train observers in an adequate manner. Although the TSE organized two training sessions, neither of these was helpful and they failed to impart information on the role observers were supposed to play.

During these training sessions, the responsibilities and tasks for observers was not made clear. A member of our delegation went to the headquarters of the Plurinational Electoral Body (OEP) to request a map of the precincts, but staffers their said they did not have any.

TSE officials also failed to respond to direct questions about the vote count process. Observers attempted to ask the TSE about the process and about photographing vote tally sheets, but the responses lacked clarity.

The training sessions were politically biased. There was no representation from the Movement Towards Socialism (MAS) party or MAS-friendly speakers. However, many of the speakers who participated in the panels are affiliated or sympathetic towards the Comunidad Ciudadana  party of candidate Carlos Mesa.

One expert said that the MAS party and the Indigenous community are linked to “drug trafficking”, although he offered no proof to justify this accusation.

During these so-called training sessions, the TSE screened videos it had aired as part of its electoral promotion campaign that, according to officials, sought to encourage voter turnout by presenting the elections as an opportunity for the country to “find itself” again. Although we applaud the sentiment, we note that the videos were completely biased. 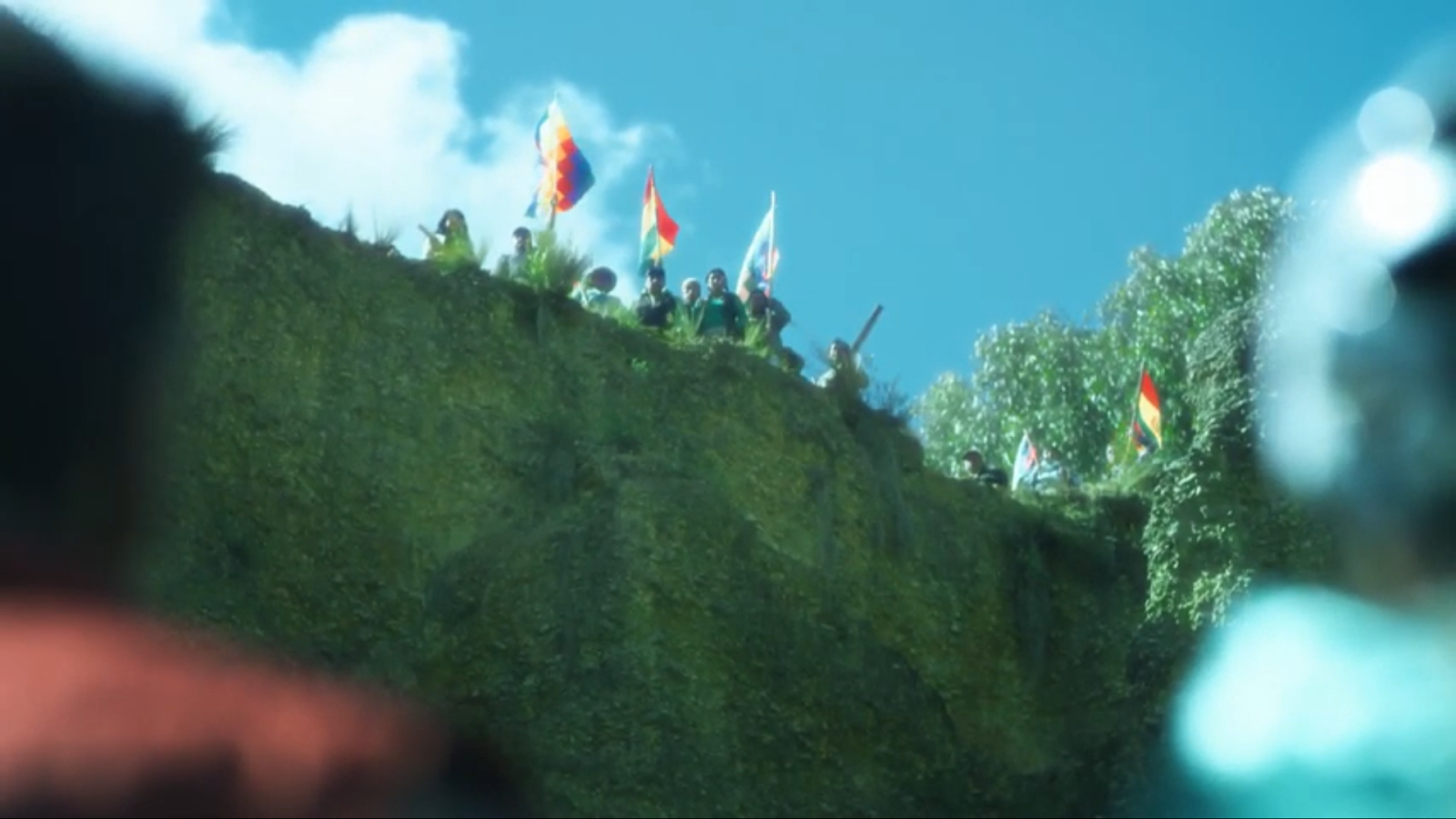 Both the Inter-American Commission on Human Rights as well as Harvard University Law School’s International Human Rights Clinic have documented the abuses of human rights committed by Bolivian security forces after November 10, 2019. However, the promotional videos suggested that the violence the country experienced was the fault of protesters, particularly Indigenous protesters who were featured in the promotional material. This coincides with the narrative put forward by the Comunidad Ciudadana and Creemos parties. The TSE should have been more careful in making these promotional videos and should not have endorsed such a biased discourse. 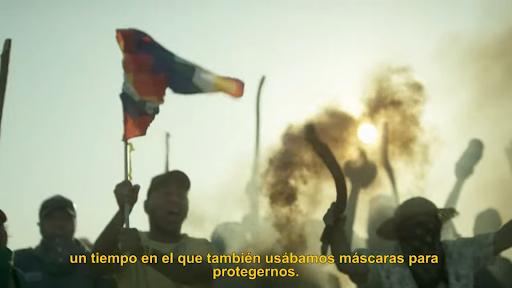 3. Irregularities in the voting process

As was mentioned previously, the elections were carried out in peace, and in a free and fair manner. At no time did we witness acts of violence or an alteration of the vote, yet we did observe a series of irregularities during the voting process.

Upon arriving at the Franco Boliviano school, a member of the military was carrying out logistical tasks that correspond to electoral authorities, telling the population details about which voting stations they were assigned to or if they had to go to a different polling center. 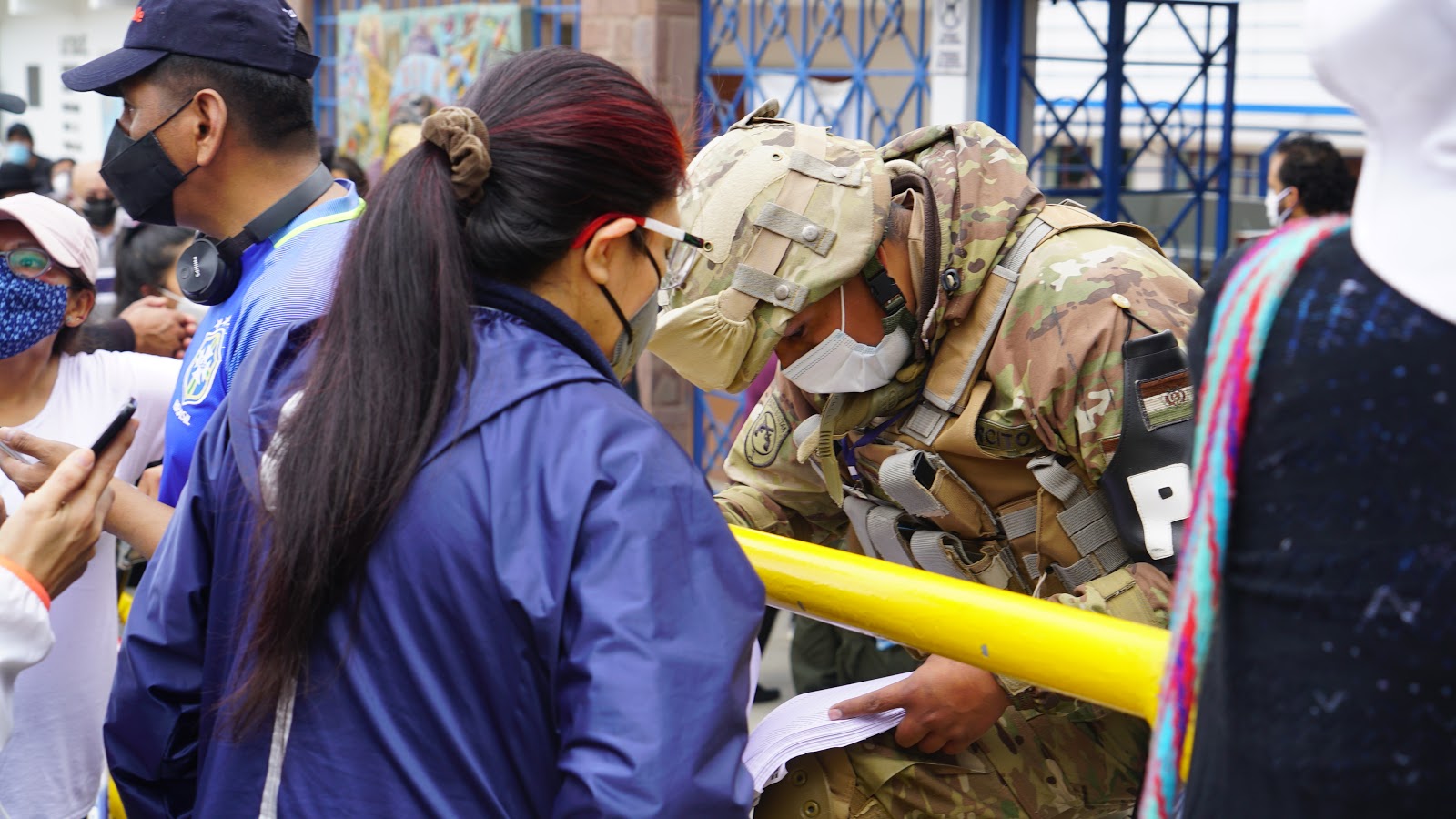 On two occasions, we were told that the military presence made voters uncomfortable. 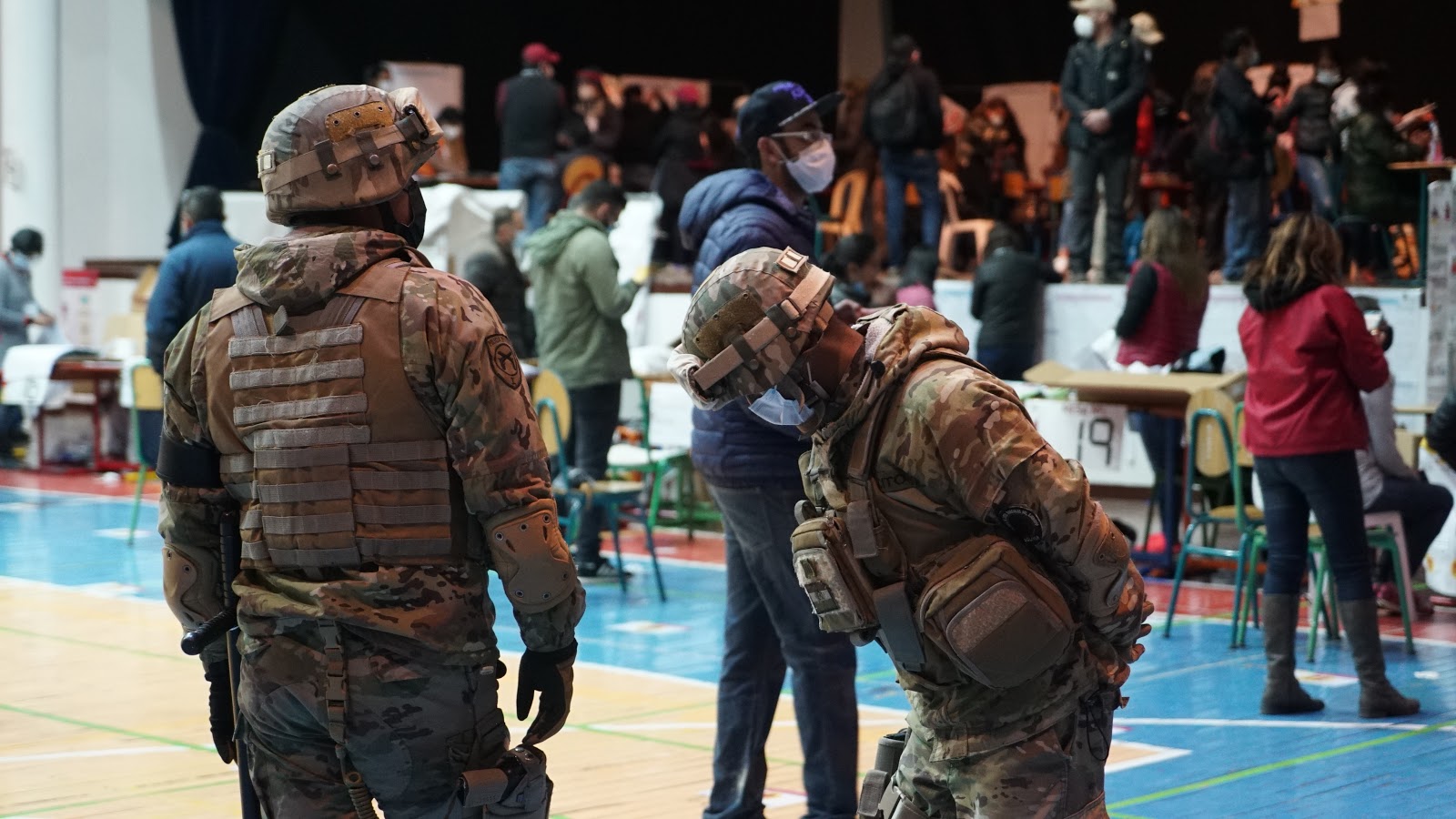 We witnessed two cases of people purged from the voter rolls without knowing why:

In Colegio Franco Boliviano, where 11,700 people are registered to vote (one of the biggest precincts in La Paz), delegates from the Comunidad Ciudadana (CC) party, identified by their CC bracelets, were in charge of managing the lines of voters and taking voters to their voting stations. These delegates are tasked with observing the vote, therefore their carrying out logistical tasks was irregular. 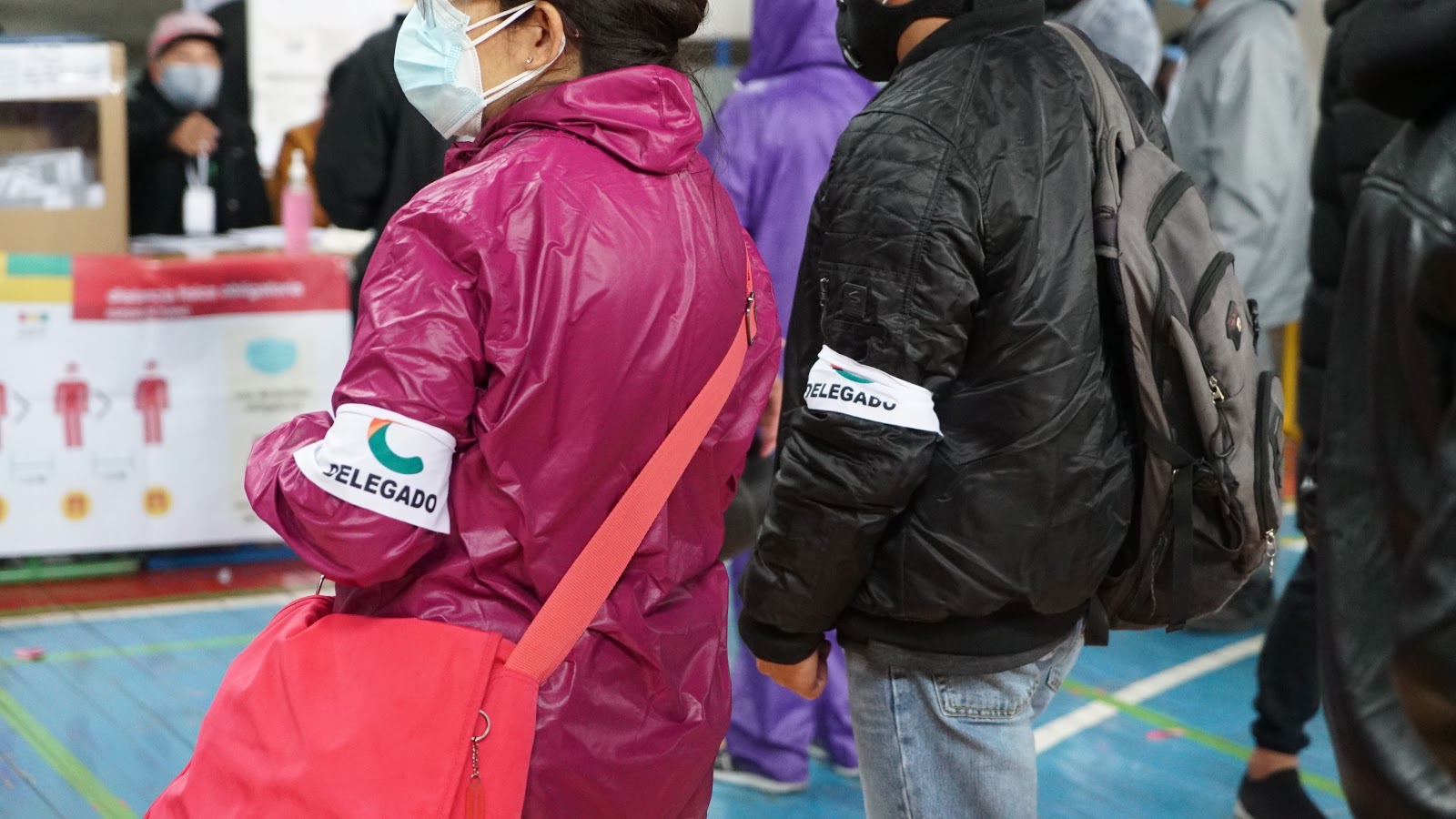 During the vote count at this precinct, our delegation observed two men attempting to intimidate a MAS delegate. Security officials were alerted to the situation and calmed things down.

Holding elections during a pandemic is a challenge of enormous proportions. In this regard, the CODEPINK delegation congratulates the Plurinational Electoral Body (OEP). Each voting station of the 14 precincts we visited had antibacterial gel and cotton swabs for the application of ink on peoples’ thumbs. Every precinct had stickers on the floor for voters to maintain social distancing. The use of masks was universal.

Nevertheless, concerns in this regard should be mentioned: 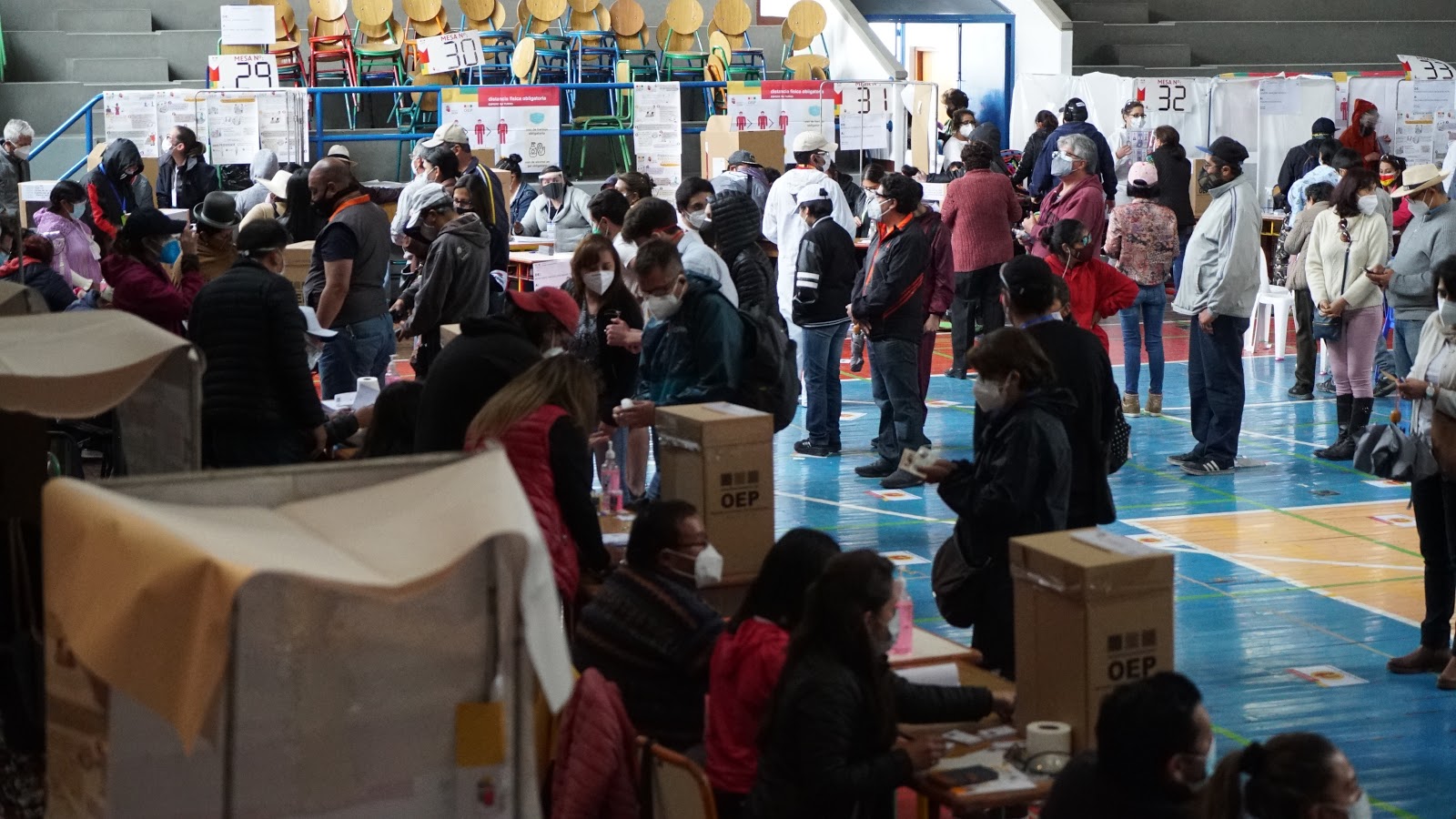 Our delegation spoke with over twenty poll workers who complained about the COVID-19 prevention protocols. Specifically, they mentioned the following:

We mention these concerns and complaints not to criticize the OEP, but to inform other electoral authorities throughout the hemisphere that will carry out elections in upcoming weeks and months. 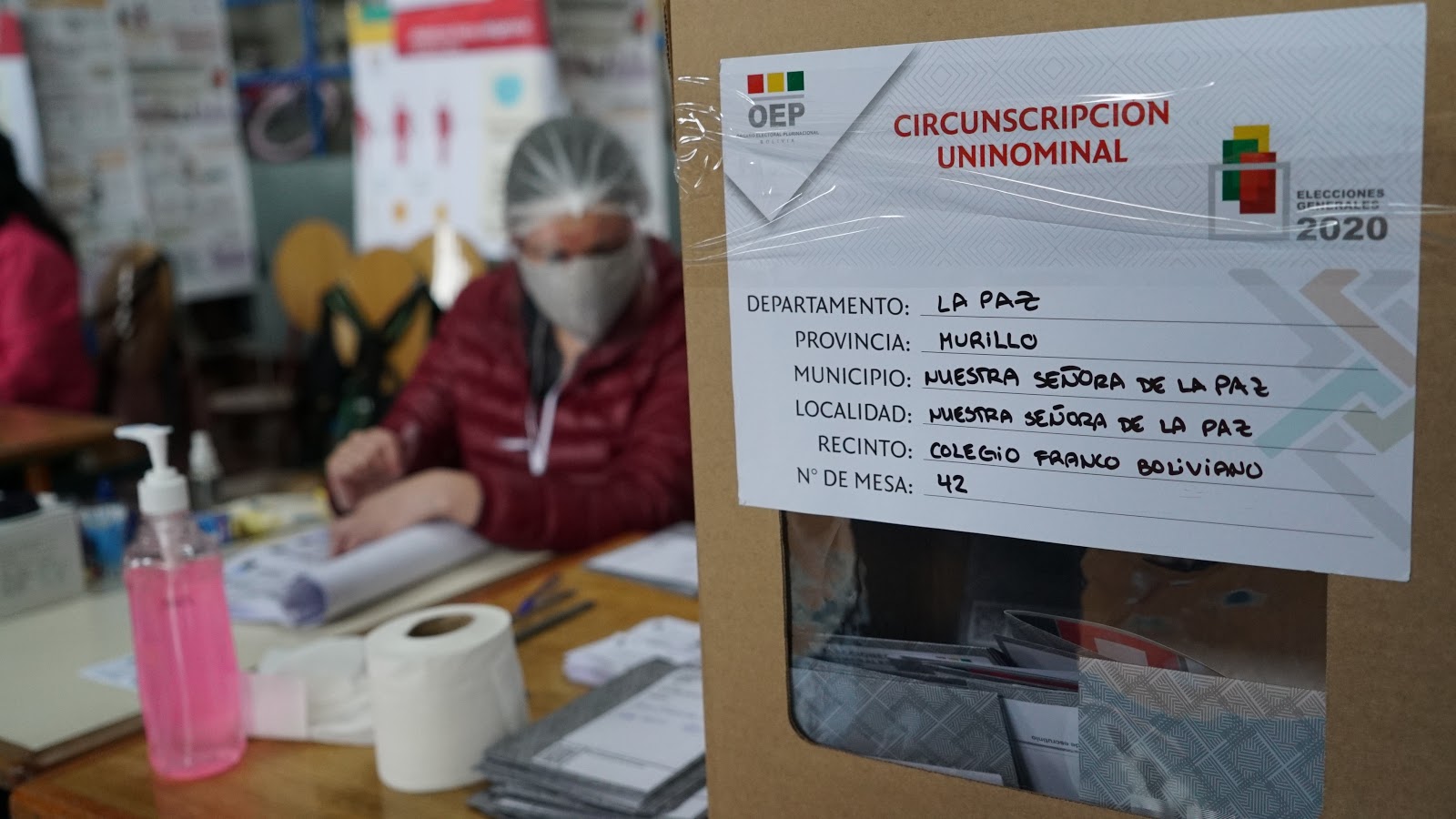 4. Delay in the count and in polls

We were concerned by the lack of information following the end of the voting day in Bolivia, as corresponding institutions and other bodies that had previously agreed to report on results failed to do so.

We must add that authorized pollsters refused to publish results while mass media did not publish exit polls, as they had agreed to. They published results at midnight, four hours after the agreed upon time (8p.m.). These actions did not contribute to the calmness and trust that should accompany the voting process. We noted a pattern of a lack of clarity during the process on the part of electoral authorities. One example is the suspension of the system for broadcasting preliminary results (DIREPRE) hours before polls opened.

We reiterate that the elections were carried out in an atmosphere of peace, civility and with widespread participation. Regarding the series of irregularities we documented, we consider that these did not alter the vote in a substantial way. Nevertheless, we suggest they be taken into account in future elections, not just in Bolivia, but in the region, considering that the challenge of carrying out elections in the middle of a pandemic is complex.

We congratulate the Bolivian people for their willingness to go to the polls in order to resolve their conflicts and we suggest that electoral authorities guarantee the people’s will emanating from the historic day of October 18 by respecting the unquestionable suffrage in line with constitutional law.