On International Women’s Day, March 8, about 50 LA activists gathered at the entrance to the Universal Hilton Hotel where the annual AIPAC fundraiser was being held.  We arrived about 30 minutes early to eight cop cars lined up in wait.  The press outreach had been effective as three local cameras were arriving along with photographers from  all the papers.

As the more than 1,000 guests arrived, they were greeted with a stretch of banners and signs, reading, "AIPAC/Supports Israel’s War Crimes" and "AIPAC/supports Apartheid."  Our giant pink banner read "Hafrada Means Apartheid in Hebrew --  Open the borders, NOW".

Their cars were caused to stop and wait as a fantastic street theater team acted out a check point.  Some actors were in full Israeli soldier costumes with fake guns and some dressed as Palestinians wearing in black with white masks. Each time ‘walk’ was allowed in the cross walk, the theater piece was played out.  It was emotionally hard to be near.  The immediate disregard, disrespect and abuse of humanity was unnerving.  The signs said "Jews Only," as the cars were waved by the check point. 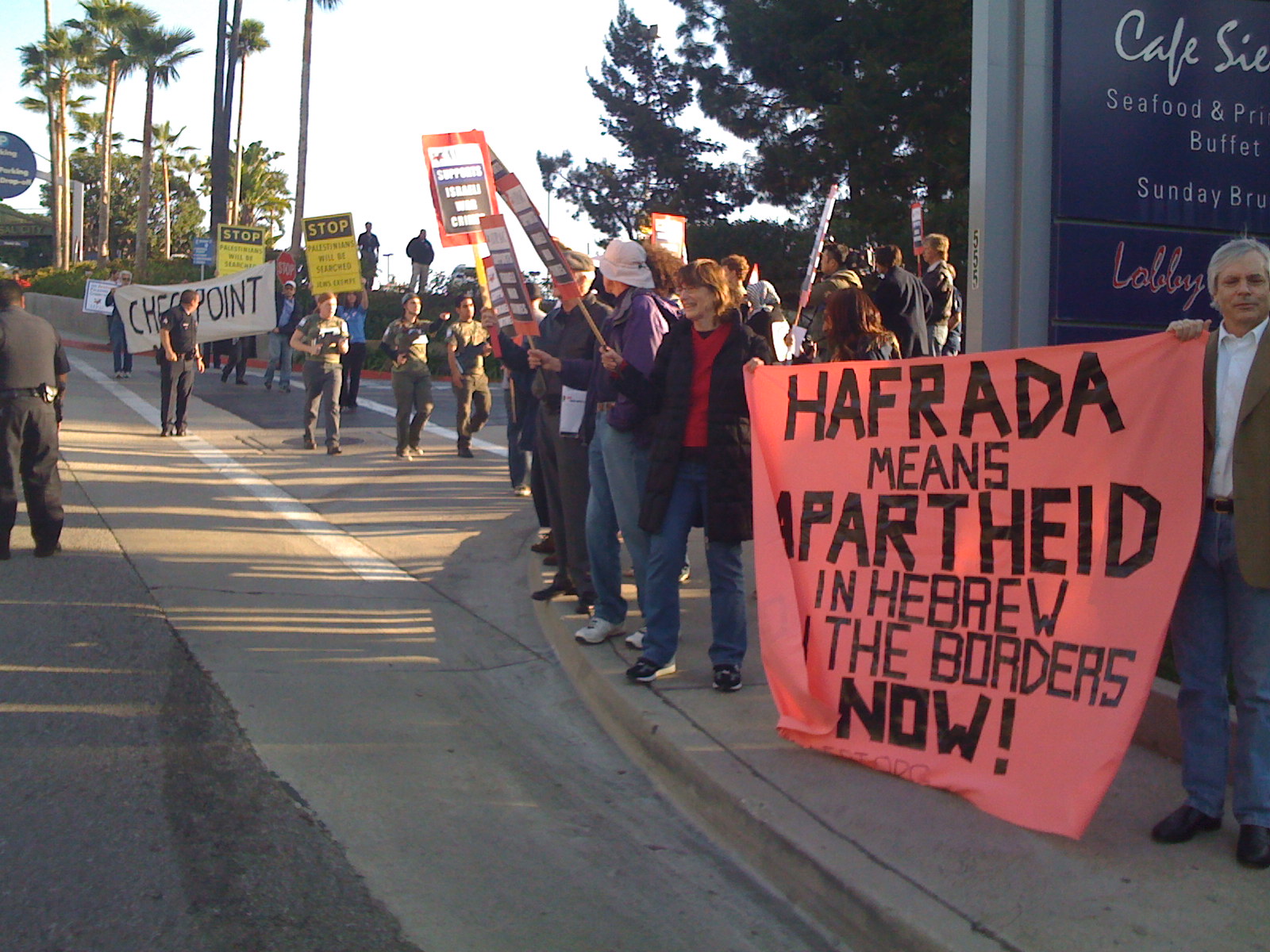 This went on peacefully for an hour, as heads in the cars shook angrily, women screamed at us, and various expressions of disgust were displayed. I answered with a peace sign. We chanted when the skit was not happening. "Congress, AIPAC, Can’t you see/Palestine Must Be Free!" "Hey Hey, Ho Ho/Apartheid has got to go," "Missiles, Tanks, and Guns/All were bought with US Funds," and "Angelenos (or AIPAC) Pick a Side/Human Rights or Apartheid."

The passion on both sides was palpable but it did not erupt and the police were respectful to those on the sidewalk and those in the cars.  Creating space without intruding.

This felt like the right thing to be doing in solidarity with our CODEPINK sisters delivering aid this week to the women in Gaza. We left as the sun set, I walked through the event lobby to get to my car and everyone bristled as I passed.