Two Activists Arrested after Mock Drone Attack on Wedding Party Blocks Drone Base Entrance. Our drone resistance presence at Creech Air Force Base this year was overshadowed by the tragic Las Vegas mass shooting incident just days before our arrival, that stole the lives of 59 innocent concert goers, injured hundreds more, and left thousands of witnesses changed for life.  All week long we contemplated and discussed as a group how we could thoughtfully tie in the senseless violence of the mass shooting event with the routine, intentional and well-disguised mass violence of U.S. foreign policy that occurs daily around the planet, to which few Americans give much thought.  We came from 5 states: Indiana, California, Arizona, Nevada, and Hawaii, plus some Las Vegas locals, and Ruben, our courageous ally, who lives in Indian Springs, across the highway from Creech AFB.  This key U.S. Reaper/Predator drone base is referred to by the U.S. military as “Home of the Hunters.”

As we held daily themed vigils (see press release), we continued to discuss the connections within our culture’s long-standing marriage to violence and war.  Veterans for Peace member, Michael Kerr, had brought his own sign that succinctly and successfully expressed it:

Prior to the Las Vegas massacre and before arriving for the week, CODEPINK member Eleanor Levine had proposed doing a re-creation of a drone wedding party attack. On Friday, Oct. 6, during the early morning commute into Creech, Cecile Pineda started our nonviolent civil resistance action by reading loudly through a megaphone the real stories of many of the wedding parties that had been brutally bombed by U.S. forces.  In hearing range of the MP’s and Las Vegas police, the “wedding ceremony” then began.  (Watch here).

After the “ceremony,” our wedding party then processed up to and along highway 95, led by bride and groom, Eleanor and Joseba. A sign was held high over the wedding procession, “USA WEDDED TO WAR,” as hundreds of Creech personnel whizzed past us in the early morning light, flooding into the base. Reaper and Predator drones were already “buzzing” over the Nevada desert landscape, by pilots in training for future remote-controlled killing.  All the while, throughout the entire wedding procession, the grim killer reaper drone, played by black veiled Michael Kerr, was always lurking in the background, “surveilling” and “calculating” the correct moment to strike.  Eventually, we took our wedding procession back down the highway to the main commute entrance into the ever-expanding Creech killer drone base.  We immediately crossed onto the entrance road, in a “celebration wedding circle dance,” that created an immediate barricade for any cars entering the base.

Though only two folks had expressed willingness to fully risk arrest, the entire wedding party agreed to participate in the “die-in” for as long as possible, and, as the lurking drone made it’s  “attack,”  the wedding party collapsed to the ground as best as they could.  We give special appreciation to our elders, JoAnn Lingle from Indiana and Cecile Pineda from California, both regular “Creech Resisters,” who participated in the “die-in” with assistance as needed, to get to and from the ground.  The Las Vegas Police made a fast approach, but followed expected police and military protocol, and did give their five-minute warning, allowing us to dramatize the real tragedy of a wedding party massacre. 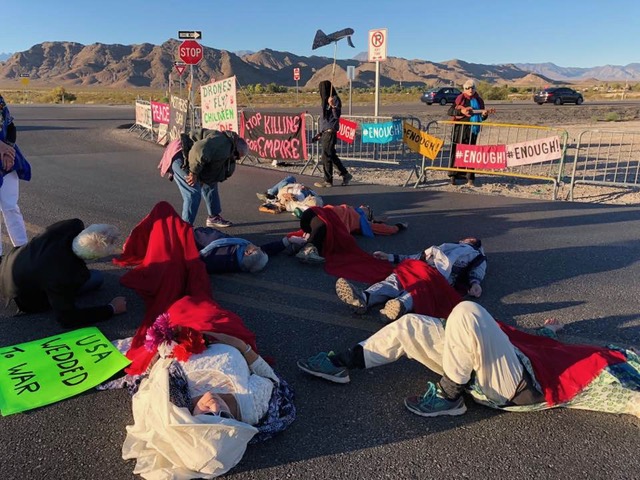 Ultimately, JoAnn Lingle and Toby Blomé were arrested, handcuffed, detained and then taken to Las Vegas, a 45 min. drive.  JoAnne, an octogenarian with arthritis and chronic shoulder problems had kindly asked the police to handcuff her in the front.  The arresting officer refused her request, and it was about 45 min. Later, after lots of complaining and talking to the supervising officer, that they corrected the problem, but with little sensitivity to her needs as an elder.  Both JoAnn and Toby spent about nine long grueling hours in detention, mostly in the hellish and abusive institution called the “Las Vegas jail,” where we are reminded with each visit how oppressive the prison industrial complex can be.  But that’s a long story.

(More on “Jail Experience” below).

A sign made by Gigi was displayed all week at our vigils to express our condolences regarding the recent Las Vegas massacre:  “Las Vegas, Our Hearts Mourn Your Loss.”

Still trying to tie in the Las Vegas massacre with the routine mass killings of U.S. military massacres from bombs and drone missiles, we discussed messaging ideas throughout the week.  We finally came up with a new banner:

After Friday’s direct action, vigils continued during morning and afternoon commutes through Wednesday, October 11.  We moved our planned Drone Victim Funeral Procession to Tuesday, when more people were present, including some Las Vegas allies, Vera and Paul. We also set up a candlelit altar at the base entrance, with flowers and large photos of some child victims of U.S. drone attacks (including 16-year-old American boy, Abdulrahman Al-Awlaki and 16 year old Pakistani, Tariq Aziz).  We processed up and down the highway during the commute, in slow, mournful fashion, dressed in black, with white masks and seven coffins with the names of the major drone-targeted countries. We later regrouped, and all agreed we should block the entrance again, this time with our coffins and masked bodies, to create a “soft blockade.”  No one that morning was willing to fully risk arrest, but we are all so weary from endless, bloody, global killing and bombing, that we felt a fierce resistance was needed. Thus, we interrupted “business as usual” for as long as we could, until the 5 min warning wore out.  This forced traffic to be diverted to a farther gate, temporarily delaying shift starts, while we demanded an end to the injustices.

The weekend that fell “mid-week” this year was intended to be a respite for us all, but Ann Wright kept many of us busy with trips to the Nevada Test Site and the nearby historical anti-nuke/peace tunnel, the L.V. Atomic Testing Museum and to University of Nevada, Las Vegas, to join a pro-gun control rally and march.  The planned rally was in response to the recent massacre and the gun show that was scheduled in Las Vegas that weekend. Unable to find the student rally, we had our own, briefly, with the towering gold-plated Mandalay Casino in the distance, site of the mass shooting incident days earlier.  We also paid a visit to to the Mass Shooting Victims Memorial recently set up on a divider on the Las Vegas Strip. It was very heart-wrenching to slowly walk by each of the 59 white crosses lined up in row, with photographs, personal bios and last words written on each by loved ones.  We couldn’t help but wish that the millions of victims killed and maimed by the institutionalized violence of U.S. foreign policies would receive the same heart-felt and passionate empathy from the American public that is poured out to the victims of this random violence by a lone shooter.  May the U.S. culture of violence and war one day be obliterated, and the lies and deception that are used to justify the endless institutionalized violence of the Pentagon be one day permanently unveiled.

On Sunday night we attended a “7 days After” candlelight vigil in Las Vegas and were surprised to hear the 3 young adult speakers addressing the bigger issues and problems connected to our society, namely the extreme violence of the military-industrial complex and their own community’s acceptance of a massive gun show in Las Vegas.  It gave us “Creechers” some hope.

Lastly, there were many intermittent and refreshing breaks in our activism throughout the week that included quiet walks through the desert, a visit to Cold Creek to see the wild horses, a bumpy desert ride in Ruben’s off-road jeep, meaningful discussions and sharings, much appreciated massages by Caroline that soothed our achy bodies, and much much more.  Special thanks also to Eleanor Levine and Cecile Pineda, who purchased groceries and prepared all the nourishing meals with assistance from others, Gigi’s uplifting voice and ukelele, and to all the many ways everyone chipped in when the need was there, and, lastly, to Maggie (& Eleanor too), for being the “forever” house mom, looking after the practical side of things.

We can only hope that next spring we can inspire hundreds of folks to join us at Creech AFB for our SHUT DOWN CREECH 2018, April 8-14th, the 4th annual mass mobilization to stop drone warfare and global militarization. 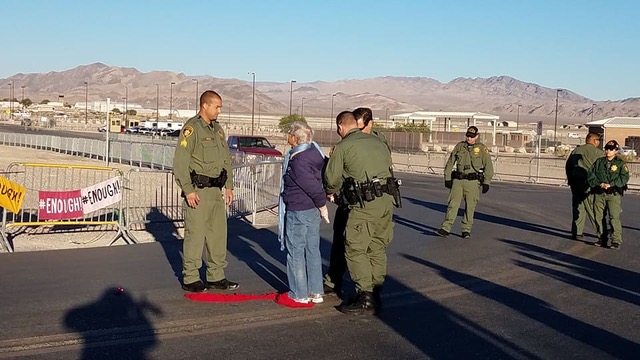 In brief, JoAnn and Toby spent most of the time, with handcuffs removed, detained separately, in large cells of about the same size.  Toby and 25 other women were crowded into one cell, with insufficient bench room for everyone, causing numerous exhausted women to stretch out on the icy cold concrete floor, attempting to sleep.  Some of them had been held there for over 24 hrs, with no offerings of blankets, beds or warm clothing in a cold, air-conditioned cell. For some strange reason, Toby was not stripped of her outer layers this time, which is not the normal protocol. She quickly offered her two outer long-sleeved tops to two of the women who were dressed lightly for the outside warm desert air, not an air-condtioned room, their bare arms stuffed into their sleeveless tops. They both expressed gratitude. In contrast, JoAnne was placed in about the same sized cell with only one other woman, who was asleep on a bench most of the time.  25 women in one cell and 2 in another?  What’s the rationale?

To while away the hours, Toby finally got the courage to act on an inspiration that she had had during previous jail time in Las Vegas.  She offered to lead an informal yoga/stretching exercise.  To her surprise, about six women quickly stood up and participated fully, expressing pleasure and appreciation throughout. It turned into a friendly bonding ritual with participants and observers alike.  Hours later, when an officer opened the cell door and called out “Blome” and five others, Toby knew that release time was coming soon.  She gathered her tops back from the two women who had borrowed them, and as she was walking toward the cell gate, she turned around to the entire group and, with a friendly, smiling face, she waved and said, “Good-bye everyone!”  Although she received back many friendly smiles and “goodbyes” in return, she was harshly reprimanded by the releasing officer, and yelled at in an extremely angry voice:  “Didn’t you listen to me?  You aren’t allowed to make friends with others in the jail here.  Do you want to stay here longer?!!”  We were soon escorted down the hallway toward yet another small cell.  As the jail guard opened a second cell to gather a few others, he yelled out angrily for all to hear: “Don’t say good-bye to anyone, unless you want to stay in here longer.”  JoAnn now joined Toby for about two more hours in a smaller cell with a few others.  We both had some very interesting conversations with many of those in the jail that day, learning about some of the darker sides of Las Vegas policing and institutionalization, which provided firsthand re-education about some of the worst daily inhumanity within our society that most Americans rarely witness.  Understandably, we were very relieved to be released while the early evening sun was still shining, and to find Eleanor and Ann Wright waiting for us to offer much-appreciated jail support and nurturing.  True friends!

Videos Tell It All:  (Great filming and narration by Ann Wright)

Cecile Pineda wrote an excellent blog (here) about our week at Creech and the U.S. Air Force’s great pride in calling themselves “hunters.”  Hunting People??? 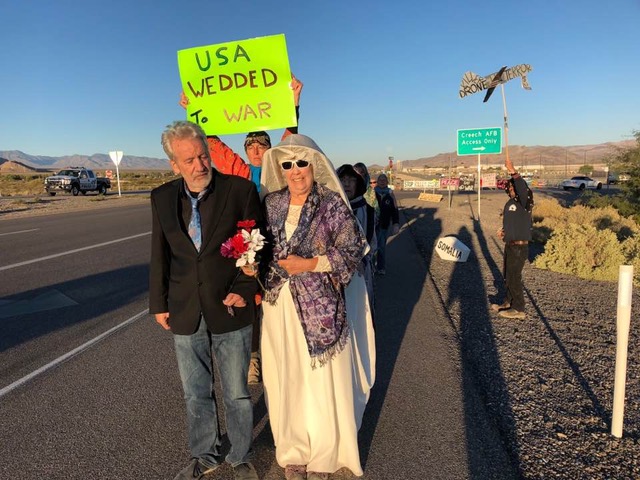