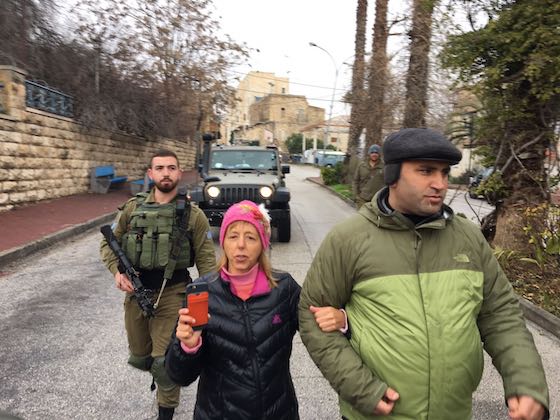 Saturday, January 27, 2018, Hebron, Occupied Palestinian Territories - CODEPINK co-founders Medea Benjamin and Jodie Evans were detained today in the West Bank city of Hebron along with Palestinian human rights defender Issa Amro and CODEPINK activist Tighe Barry. Benjamin, Evans and Barry traveled to the West Bank this week to join with Palestinian activists in in their struggle to end Israel’s systems of apartheid and occupation. Benjamin, Evans and Barry entered the country despite the recent announcement by the Israeli government that the leaders of CODEPINK, along with 19 other organizations worldwide, are banned from entry into Israel because of their campaigns for Palestinian freedom and equality.

Benjamin, Evans and Barry had spent the morning protesting in front of Abu Rajab family home in Hebron where, since July 2017, Israeli settlers have been forcibly maintaining an occupation of the Palestinian home. They also rallied around the gate that imprisons the Salayma and Gheith Palestinian neighborhoods in Hebron. 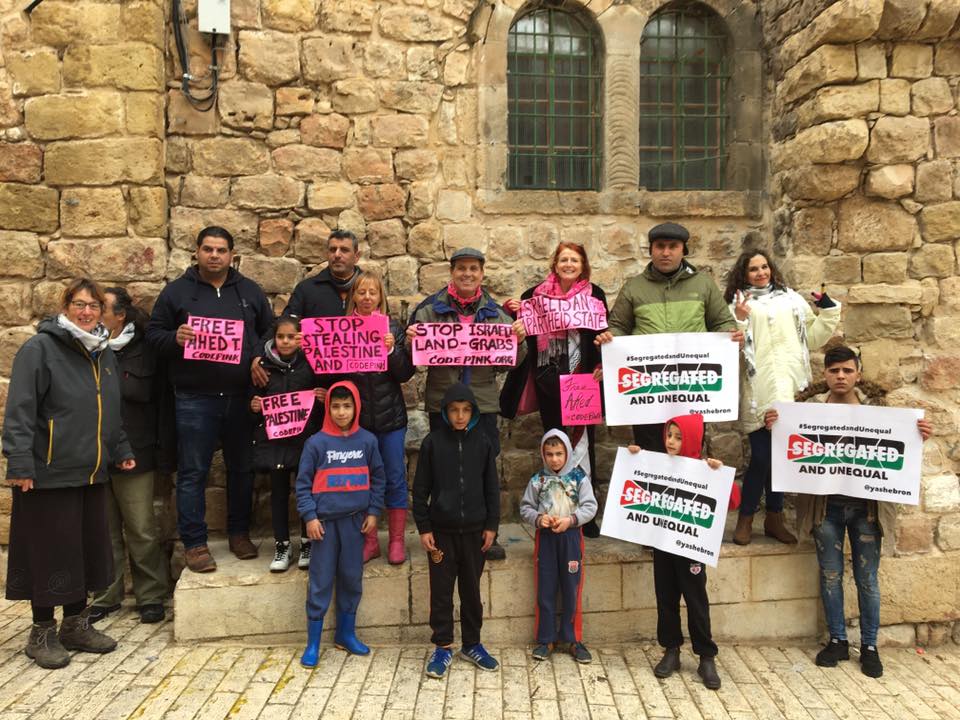 “This is apartheid,” said Amro. “I should not have to walk on the side on the dirty, broken side of the road, separated from my friends by a fence, because I am Palestinian and Muslim and they are Jewish and Christian.”

After protesting, the group was confronted by soldiers attempting to cut off the road for settlers. Amro spoke with one of the soldiers of African descent, saying to him, “even as a soldier, you suffer from Israel because of Netanyahu’s racist attitude toward black people.” They

They detained Amro, Benjamin, Evans and Barry, taking them to a police station and accusing Amro of insulting a soldier by exposing racism in Israel. Amro was eventually released after the group produced a video of what Amro had said to the soldier. 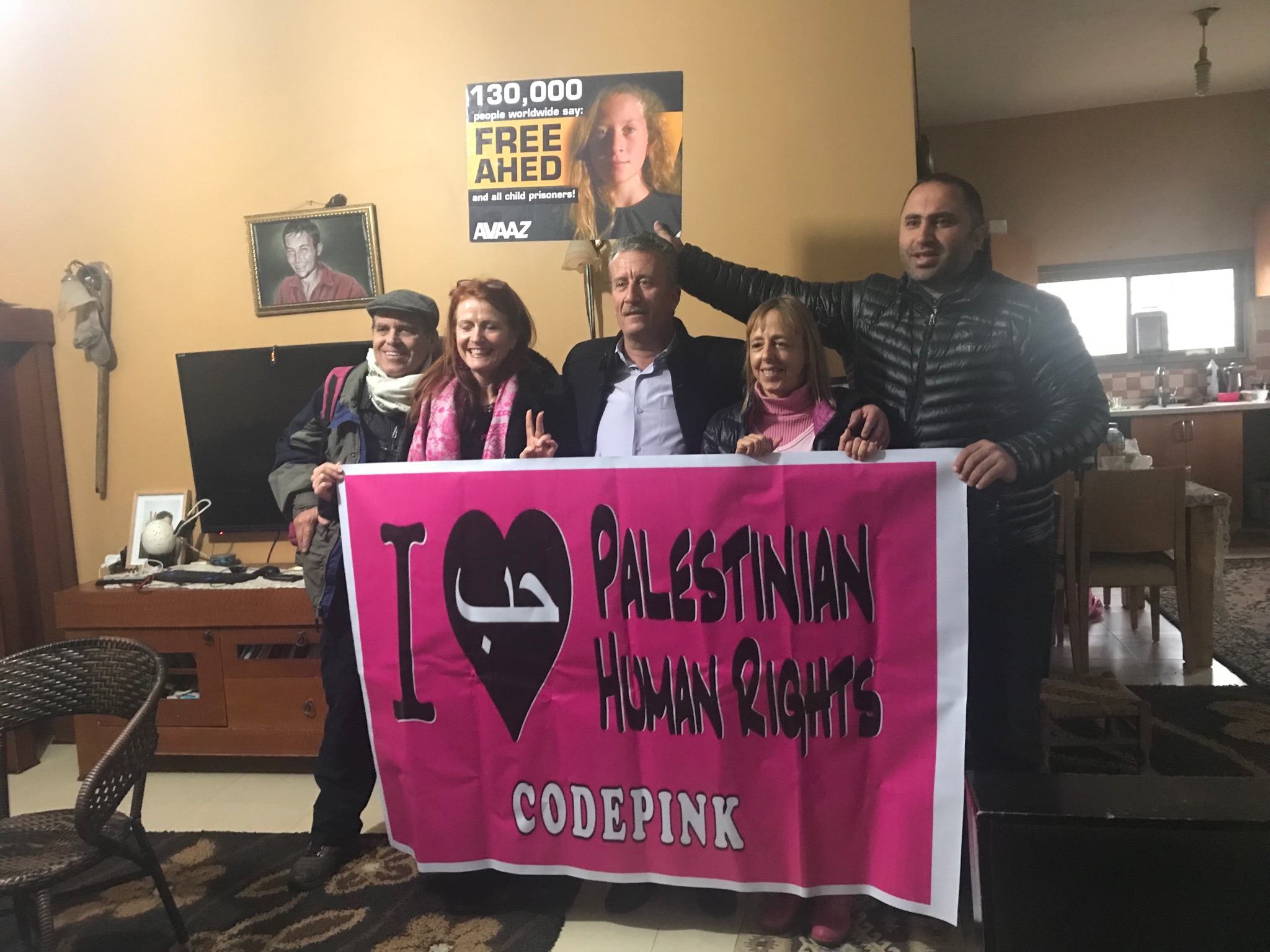 “2018 marks 70 years of Palestinian suffering and displacement,” said Benjamin. “Continuously, Israel confiscates more and more Palestinian land and carries out violent and abusive acts against the Palestinian population. I have been coming here for 50 years,” Benjamin said, “including spending a summer on a kibbutz when I was 16-years-old. From its founding in 1948, Israel has been practicing racism towards Palestinians and other minority populations, including the current deportations of black African asylum seekers. I am appalled that my government gives huge financial support to Israel to continue its policies of discrimination and displacement. It is time for a change.”

“I am here in occupied territory today, in solidarity with my Palestinian brothers and sisters who spend every day resisting Israel’s system of apartheid,” said Evans. “ 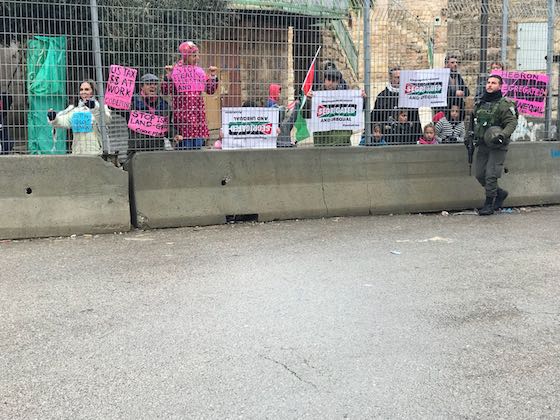 To privilege Jewish settlers so they are able to continue to take the homes of the indigenous Palestinian population is immoral and unjust,” she continued. “I refuse to let Israel silence my support for Palestinian rights and I ask all my friends and colleagues around the world to join me in expressing solidarity with the Palestinian people who have been subjected to 70 years of ethnic cleansing and oppression.”

Evans, Benjamin and Barry spent the previous day in the village of Nabi Saleh visiting with the father of 16-year-old Palestinian political prisoner, Ahed Tamimi. CODEPINK has been campaigning for the girl’s release since her December 19, 2017 arrest by Israeli soldiers.